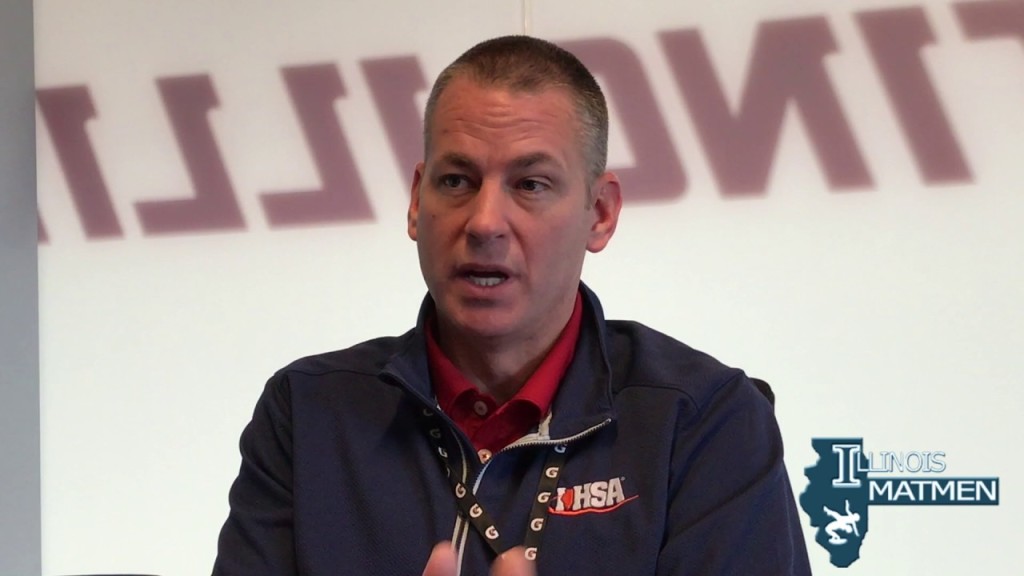 Note: This is the first of a two-part Q&A with IHSA Executive Director Craig Anderson. The second-part will run prior to next Saturday’s dual team state tournament.

Craig Anderson is the man in charge of it all.

Matmen: In your experiences, what makes the Illinois state wrestling tournament so special and different from other states?

Anderson: I don’t have a good comparison because I haven’t attended state finals of many other state associations, but it’s my belief – and from what I hear from those who have the perspective of attending other state tournaments – that the Grand March we have (is special). Also, the quality of wrestling that we have really stands out nationally, so we’re able to get some fantastic matchups and matches in our state finals which is really, in my opinion, what it’s all about.

Matmen: What do you most look forward to every year at the state wrestling tournament?

Anderson: One of the things I look forward to is the event on Saturday night (Grand March, state title matches).

Coming back in my new role, it’s also about the people. With wrestling – whether it be coaches, officials or volunteers – we return so many people year after year. I’ve talked to a number of people this weekend who’ve said, ‘I started coming in 1968 or 1973.’ The longevity of the folks that continue to want to be here, take time out of their schedule to be here and travel from out of state just to come is what I really look forward to every year. I look forward to seeing those people who helped me in my previous role and who continue to help the IHSA put on a fantastic event.

Anderson: We’ve had that discussion with coaches.

Our advisory committee meets annually and they are likely to review that again, so it really comes down to what’s possible within the time constraints we have with the State Farm Center and what will our member schools allow us and want us to do – and ultimately, it comes down to that. We’re governed by a Board of Directors and the advisory committee, which is made up by a number of coaches who are going to make a number of recommendations, one of which may be what’s possible to do when it comes to full wrestlebacks.

To date, we’ve just been restricted on time and safety of kids.

Matmen: Starting the state tournament earlier on Thursday could help alleviate time issues, so do you want to keep the schedule as it is or is that a possibility?

When we expanded to three days, we expanded the number of kids who get to come to state … but I think there’s a balance between what the State Farm Center is going to allow us to do and what we want to do. We don’t have a full week’s rent, and it requires some set up for the arena. They could have a basketball game Wednesday night and have to flip the facility for our event on Thursday and it just may not be feasible to have it ready that early on Thursday. Granted, the last few years we’ve been able to get in on Wednesday, but the Big Ten could always tell Illinois, ‘You’re hosting this game,’ so we have to allow for that.

I also worry about time away from school for kids. I think our member school principals would be concerned if we say that we’re going to require more of (kids’) time. I do realize we have some schools that travel in Wednesday night, but we still have some local teams who don’t do that travel.

I think it’ll continue to be discussed, but I think there are some limitations.

Matmen: Every wrestler competing in the state tournament weighs-in at the same time, but some – like on Thursday – didn’t wrestle for nearly eight hours. Have there been any discussions on staggered weigh-ins by class?

This is the first year we’re at the State Farm Center when the renovations are complete. For the last few years, we weren’t sure what we’d find, so a little bit had to do with the logistics. You’re going to have wrestling ongoing if you stager weigh-ins. Some will say, ‘Then just conduct it off site,’ but that’s a little tricky, too, to have scales off site and on site for weight checks.

Discussions will continue and, if there’s an area of State Farm Center that we feel like logistically we can get weigh-ins closer to when a class will wrestle, we’ll consider that.

Anderson: We’d be open to that discussion.

I remember when we added Thursday, we reconfigured our time schedule and moved the semifinals back to Friday night. I think some people look forward to that session. In the time schedule, for the first time at the state tournament, we have all three classes together. While the excitement on Friday night isn’t what it is on Saturday night, it’s still really cut throat and intense.

Matmen: What are your thoughts of flowing in all the quarterfinals at once by weight regardless of class? Not all fans like the wait between the three quarterfinal rounds with first-round wrestlebacks mixed in.

Anderson: At this point, as a fan of wrestling, I think the arena would be more exciting if we had the fans from all three classes here together, so if the coaches believe they want to create that atmosphere on Friday we’d definitely be open to adjusting the time frame.

If we do keep Thursday staggered by class, 3A is at a disadvantage, and it does take away from the argument of (staggered) weigh-ins.

The (splitting of the classes for the quarterfinals) was a recommendation from the coaches so that a coach and his team didn’t have to be here all day, so a decision to split the classes was a suggestion made by coaches and we went with it.