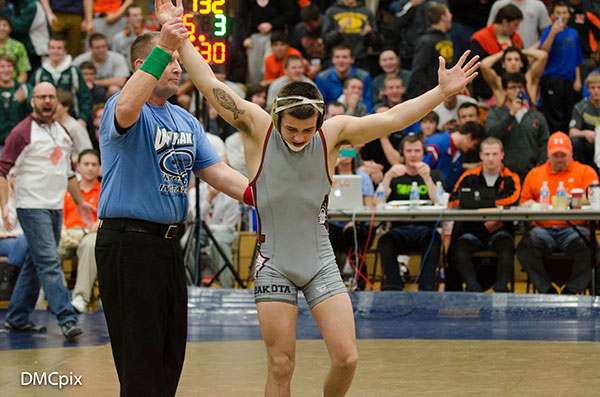 Jeff Bowers is the man behind some of the state’s biggest matches.

One of Illinois’ most well-regarded officials, the 54-year-old has been a high school official for two-plus decades and so far this season has already officiated the Whitlach, the Dvorak and The Clash. A Bloomington native and a current resident of Whitefish Bay, Wisc., Bowers was the 2014 IWCOA Official of the Year and has officiated in 18 IHSA individual or dual team state tournaments with more to come this season.

Recently, Illinois Matmen caught up with Bowers to discuss misconceptions of officiating, the tournament he most looks forward to and the one match he was most nervous to officiate.

Illinois Matmen: What’s your background in the sport and how did you become an official?

Bowers: My father was the wrestling coach at Bloomington High School from 1955 until 1984, so that is how I was first introduced to the sport.

I started wrestling when I was young and continued throughout high school. I placed sixth at 167 pounds in Class AA in 1980.

I was always a better baseball player than a wrestler, so I played baseball at George Mason University in Fairfax, Va. After I graduated, I lived in California for a couple of years before I moved back to Illinois.

I always loved the sport and wanted to stay around it, so around 1990 I started officiating and have been in it ever since. In my early years, I’d ref in Granite City (near St. Louis) and then go up to suburbs of Chicago in the same week just to get visibility.

Illinois Matmen: What’s the best and worst part of being an official?

Bowers: The best part is the people in the sport from coaches to wrestlers to the fans. I also just like the nature of the sport, the work that goes in and what it teaches you in the form of life lessons. When you’re out on the mat it’s just you, so it’s a great teacher, and I think what I learned when I wrestled still helps me in my business career.

The toughest part is you have to learn how to deal with coaches and kids who sometimes are going to disagree with what you call. Most coaches are very good about it, but unfortunately not all.

Illinois Matmen: What’s the biggest misconception wrestlers, coaches and fans have about being an official?

There’s a lot of things up for interpretation in wrestling, and stalling is probably the most-discussed item. What is stalling? What isn’t? Is it called the same in the first period as in the third period? If there’s a close line call you’re looking at, is there control? What are the supporting points? Are they inbounds or out of bounds?

Illinois Matmen: You travel a lot and have officiated in numerous states, so have you noticed any big differences about wrestling from state to state?

Bowers: Yeah, there are some.

For instance, I was at The Clash (in Rochester, Minn.) and the majority of the officials are from Minnesota, and I noticed that when there are scoring opportunities on the edge they’re a little more willing to let the action continue as long as the majority of a supporting point is inbounds. They let the action go in an effort to reward that offensive attack, and I kind of like that. I like letting the kid who is initiating have more of a chance to score on the edge where in Illinois it’s pretty cut and dry as to what’s inbounds and out of bounds. 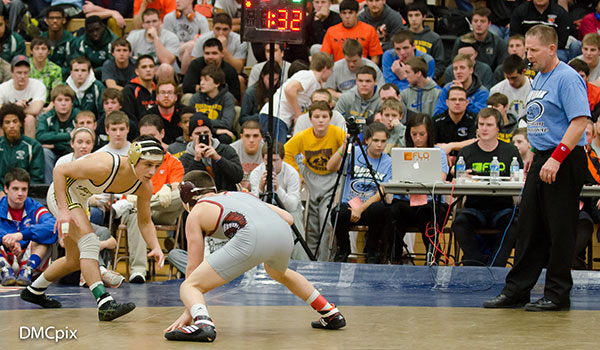 Illinois Matmen: What’s the one tournament you most look forward to every year?

Bowers: I’ve done the Dvorak for probably 23-24 years and it’s always been the biggest tournament in Illinois, although there are also a lot of other great tournaments now like the Whitlach, Berman and Granite City. But the Dvorak is where I cut my teeth early on. I started that tournament in my second or third year of officiating, so that’s the one I always look forward to.

I’ve also done The Clash five times. They do it first-class and you get teams from all over the country. This year, the No. 2-, No. 3-, No. 5- and No. 12-ranked teams were all there. You had some of the best teams in the country there for dual meets, and that’s fun.

Illinois Matmen: If you wish coaches knew/understood one thing about officiating, what would it be?

Bowers: In my opinion, I think all coaches should have to take the same test we do and understand the rules like we do. Don’t get me wrong – there are a lot of coaches who do – but there are a lot of coaches who don’t understand the rules and the small things like what is a supporting point? What is not a supporting point? There are so many things that go into making a call.

Another thing I’d like for coaches to know is that we’re out there doing the best that we can. Every official wants to make the right call 100 percent of the time, but it’s impossible to do since there are so many things up for interpretation. One ref may see something different than another. I go home and critique myself every night I ref, and there’s always something that I wish I would’ve done better, but we’re out there to do the best job we possibly can.

Illinois Matmen: How well do you know the wrestlers you’re officiating? Are you aware that a kid is highly-ranked or if it’s a big match?

Bowers: When you get the top guys you tend to know of the kids. I did the Nelson Brands-Austin O’Connor (152-pound title) match at the Dvorak, and I knew who both of those kids were. I had Austin Gomez in The Clash against a kid from Minnesota. I didn’t know the kid from Minnesota, but I knew Austin.

You tend to know the better kids because you’ve seen them a lot in tournament finals and what not, but most of the times, no, I don’t know much about a lot of the kids.

Illinois Matmen: What’s it like to officiate a ‘big-time’ match? Do you get as excited/nervous as the wrestlers?

Bowers: I think the most nervous that I have ever been was when I did a Dvorak final between (Dakota graduate) Josh Alber and (Glenbard North alumnus) Jered Cortez, and it went into overtime.

Once the whistle blew, I just concentrated on reffing the match, but before that with all the buildup and hype… I was nervous.

Usually, though, I’m pretty calm and don’t get too rattled. I feel like the more you can control your emotions the better you are at understanding the situation and making the right call. 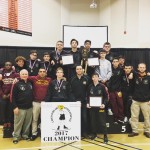