ON TO THE FINALS! @Imar165 defeats Alex Marinelli 5-2 and becomes just the 16th four-time NCAA finalist!

In addition to Martinez, redshirt junior 184-pounder Emery Parker clinched his first All-America honor with a 3-1 victory over No. 3 seed Ryan Preisch (Lehigh), and then avenged his first-round loss to North Carolina’s Chip Ness, winning 5-3, to advance to face Michigan’s No. 4 seed Domenic Abounader in the consolation semifinal on Saturday morning.

For the first time, @Emeryparker is an All-American!

As a team, the Illini sit in 15th place with 33 points, but sit just four points outside the top-10.

By reaching his fourth consecutive final, Martinez becomes just the 16th NCAA wrestler to become a four-time finalist. Earlier in the day, Martinez clinched his fourth All-America honor making him the first in Illinois program history to do so.

As a team, the Illini sit in 15th place with 33 points, but sit just four points outside the top-10. Awaiting Isaiah Martinez (16-0) in Saturday night’s 165-pound title bout is Penn State’s Vincenzo Joseph (24-2) in a rematch of last year’s NCAA final that saw Joseph win by fall in the third period. Holding a 3-1 advantage in the series, Martinez defeated Joseph in the 2018 Big Ten Championships final two weeks ago in East Lansing by a score of 4-1.

“Of course, I wanted him again in the finals,” said Martinez of the impending rematch. At the end of the day, it really doesn’t matter, like you said. But of course I want that matchup again. We did it at the Big Ten finals, now it’s time to do it for real.”

Martinez will look to join an elite club of 31 three-time NCAA champions on Saturday. Of the 27 wrestlers to have won exactly three NCAA titles, only four of them were a four-time finalist.

“He’s a good wrestler, real good wrestler, good hand fighter, strong,” Martinez said of Marinelli. “Yeah, those matches are good, right. They remind you of how to grit things out.”

In total, Martinez is 18-1 at NCAA Championships, tallying eight wins with bonus points along the way.

At 184 pounds, Parker clinched his All-America honor after wrestling back from a first-round loss on Thursday afternoon with five straight wins.

In the match against No. 3 seed Ryan Preisch (Lehigh) to clinch it, Parker used a first period takedown and ride out to win the match. Up 2-0 after three minutes, Parker managed an escape in the third period and held on for the 3-1 upset.

After coming close on multiple occasions to beating Ness on Thursday, Parker finished his shots on Saturday night, scoring two takedowns, a reversal and 1:59 of riding time to lead the Illini All-American to a 7-5 victory over North Carolina’s Ness.

Dropping his first consolation match of the evening, redshirt freshman Mike Carr (141) saw his run at NCAA Championships come to an end one win shy of All-American status. Eastern Michigan’s Sa’Derian Perry beat Carr on a takedown in the closing seconds of the match that was awarded following a challenge by Eastern Michigan.

Isaiah Martinez advances to his fourth career NCAA final, becoming just the 16th wrestler to do so.
In the final, Martinez will wrestle Penn State’s Vincenzo Joseph of Penn State in a rematch of last year’s final. Martinez is 3-1 all-time against Joseph, defeating him this season in the 2018 Big Ten Championships final. Joseph’s lone win against Martinez came in last year’s national title match.
With a win on Saturday night, Martinez would become the 31st wrestler to win three NCAA titles
Martinez became Illinois’ first four-time All-American with a 10-1 major decision of No. 9 seed Chance Marsteller in the quarterfinals
Martinez is outscoring his opponents 45-13 through four matches at NCAA Championships this season, including a 28-8 advantage in first periods.
Martinez improves to 18-1 all-time at NCAA Championships with eight wins with bonus points, including three tech falls
Martinez ties Brian Glynn (2002-05) for ninth place on Illinois’ all-time wins list with 116 wins
Emery Parker collected his first All-America honor with a 3-1 upset of No. 3 seed Ryan Preisch of Lehigh. Parker remains 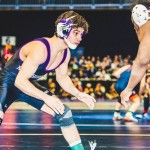 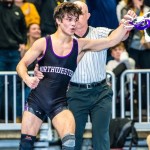