IOWA CITY, IOWA — Red-shirt Sophomore Isaiah Martinez won his second straight Big Ten title at 157-pounds with a match for the ages against #1 Jason Nolf. Avenging his loss to Nolf back in January, snapping his 54-match win streak, Martinez won in double overtime. For his performance this weekend, Martinez was named the Big Ten Outstanding Wrestler of the Championships for the second consecutive year. As a team, Coach Heffernan’s squad placed seventh, just a point and a half behind sixth-place Michigan.

“{We had} good finishes from Rodrigues, Black and obviously Martinez,” said Head Coach Jim Heffernan. “Isaiah’s match was a war between two great competitors. I think Richards let his opponent dictate too many positions and got taken out of his game a little bit. We still have time to make adjustments and improve. We came out healthy and need to get a little rest for a few days prior to resume training.”

The much anticipated rematch of #2 Isaiah Martinez and #1 Jason Nolf lived up to it’s billing, needing two overtimes to determine a victor. After the two grapplers, entering with a combined one loss during their collegiate careers, exchanged escapes during regulation, the match headed to overtime tied 1-1. After nothing was decided in sudden victory, each wrestler notched an escape to make it 2-2. In the second overtime, Nolf scrapped to get the escape point, leading 3-2. With less than ten seconds left, Martinez appeared to have earned a takedown near the scores table, but the ruling was overturned upon further review. With it Martinez taking his turn to start on bottom, all he needed was an escape to earn the victory on his riding time advantage. The red-shirt sophomore from Lemoore, California escaped with 24 seconds left to tie the score, 3-3, and then held on for his second Big Ten title in as many years. The victory was his first in an overtime match and moves his career record at Illinois to 62-1.

“[Nolf] has proved to me he’s a competitor so I had to take him a lot more seriously this time,” said Martinez. “All that time waiting between January and now, I was just pounding away, pounding away. I just worked every single day and thought about it every single night before I went to bed. I learned how powerful the mind is, how far you can take yourself if you believe and you have that mental toughness. We still have one more, and that’s what I’m looking forward to now.”

At 133 pounds, #1 Zane Richards and #2 Clark faced off in a rematch of the January 8 dual that saw Richards defeat Clark 5-4 in sudden victory. Today’s dual remained tip and tuck throughout, neither wrestler giving an inch. After a scoreless first period, both grapplers earned escapes in to send it into overtime, tied 1-1. Clark was able to earn an escape in overtime, and then kept Richards (23-1) under wraps to win the title bout in front of the home crowd, 2-1. The runner-up finish is the beset of his career, while the defeat snaps his perfect (23-0) record this season.

The final Illini wrestling for a Big Ten title was #3 Zac Brunson at 174-pounds. His opponent, undefeated #1 Bo Nickal of Penn State, got to his offense early and often with three takedowns in the opening period. Nickal continued his push for the final two periods, sealing the major decision victory with a four-point near fall in the final two minutes to win 19-8. For Brunson, the second-place finish is the highest of the red-shirt junior’s career.

Steven Rodrigues Wrestles Back to Place Third at 165

After losing in his semifinal match last night to #3 Bo Jordan of Ohio State, the Illini senior fought back through the consolation bracket on Sunday afternoon to claim his best Big Ten finish in his career. The senior got his first victory of the day by controlling Purdue’s Chad Welch for seven minutes, racking up two minutes of riding time, on his way to a 5-1 decision. In the third-place match, Rodrigues took on #6 Austin Wilson (NEB) for the second time in as many days. For the third consecutive time this season the Illini senior grinded out a victory in the final period, this time using a late takedown to earn a 4-2 decision. Like his teammates, this year’s Big Ten Championships was Rodrigues’ most successful of his career.

After defeating eight-seed Nick Nevills (Penn State) and upsetting three seed Sam Stoll (Iowa) to end session two on Saturday, Black met fifth-seeded Michael Kroells in round four of the consolation bracket. After dropping an 8-0 major decision in Champaign a month ago, Black stayed close with Kroells today, only conceding an escape point. Unfortunately for Black, Kroells made the escape point stand up for a 1-0 decision. Having already claimed an improved finish over last season, Black battled #6 Collin Jensen in the fifth-place match. After falling behind 1-0 in the second period, Black rebounded with a reversal in the third period to beat the Husker by a score of 2-1. His victory placed him fifth on the podium, topping last season’s eighth-place finish.

Koepke dropped his opening bout today against 184-pound top seed Dom Abounader of Michigan. Koepke was unable to get to his offense as the Wolverine controlled the pace on his way to a 9-2 decision. Looking to top his sixth-place finish last season, Koepke battled #2 McIntosh in the fifth-place bout. However, McIntosh got the best of the Prospect Heights senior for the second day in a row. Koepke led 1-0 into the third period, but an escape and takedown from McIntosh earned a 3-1 comeback victory. 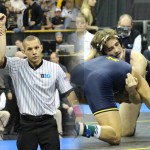 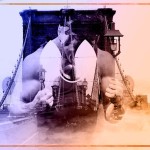