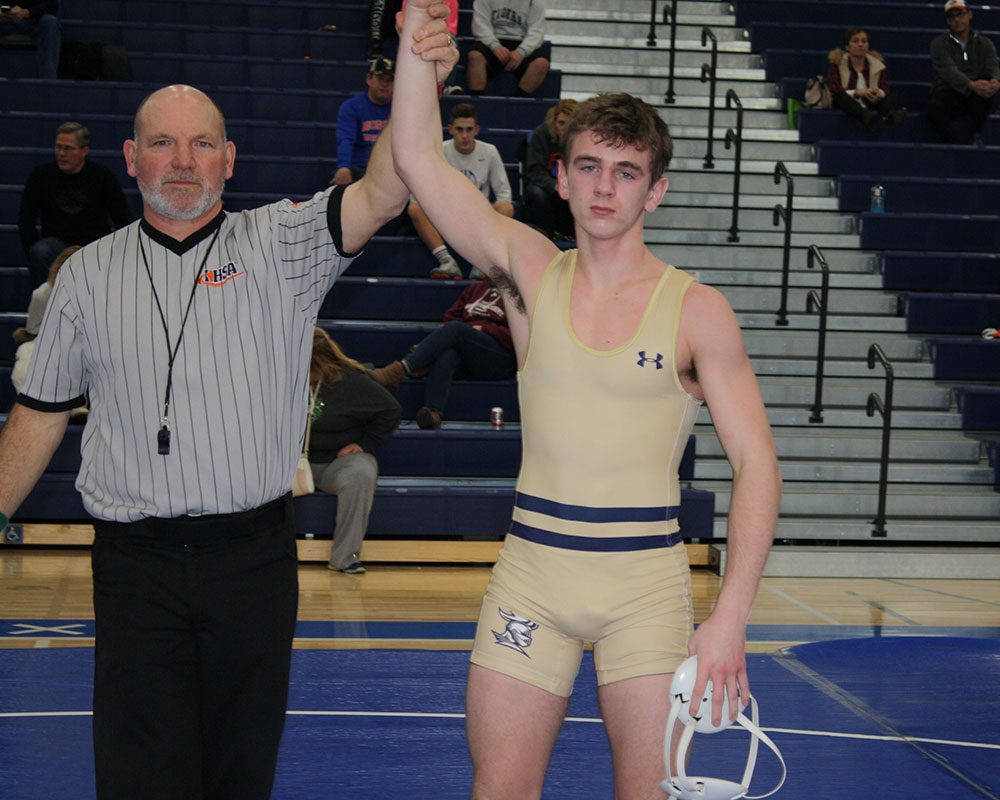 When Joey Bianchini made the decision to attend IC Catholic Prep instead of following in the footsteps of his older brother Anthony to Elk Grove High School four years ago – he would soon become the cornerstone and building block for the Knights wrestling program.

Following an impressive 2015 rookie campaign, Bianchini would quickly show the signs of future stardom – later demonstrating his excellence when he lifted the 113-pound state championship trophy a year ago.

The state title was the first in program history, and only the fourth individual state championship in any sport for IC Catholic.

Bianchini’s performance this season has continued to be out of this world, insuring his his place atop the Illinois Matmen 1A state rankings at 138 pounds.

“I really don’t care much about state rankings,” said the senior, with all due respect to this wrestling site’s Go Earn It Wrestling Apparel state ranking weekly feature.

“What I like is me having a target on my back, and (that) everyone is coming after me this season (it’s made me a better wrestler) – but in reality, nothing really matters until that final weekend of the season is over in Champaign.”

What’s happened in the final weekend of the past two seasons to our featured subject has been one that has touched all of Bianchini’s emotional buttons, beginning with his second place finish two years ago.

While he admits his 7-6 loss in the state final bout in 2016 was heartbreaking, it did, however, provide the extra incentive to fuel an all-out assault on an offseason training program which would ultimately lead to a dominating three-day effort one year ago
to win his top prize.

“That loss stayed with me for a long time, in fact, when I would think about that match it would make me angry, but it also made me more determined than ever,” recalls Bianchini.

Bianchini would storm through the 1A field last year, finishing up at 38-1 overall, and picking up where he left off from a year ago by sporting a 30-3 record thus far, to raise his overall record to 138-13. 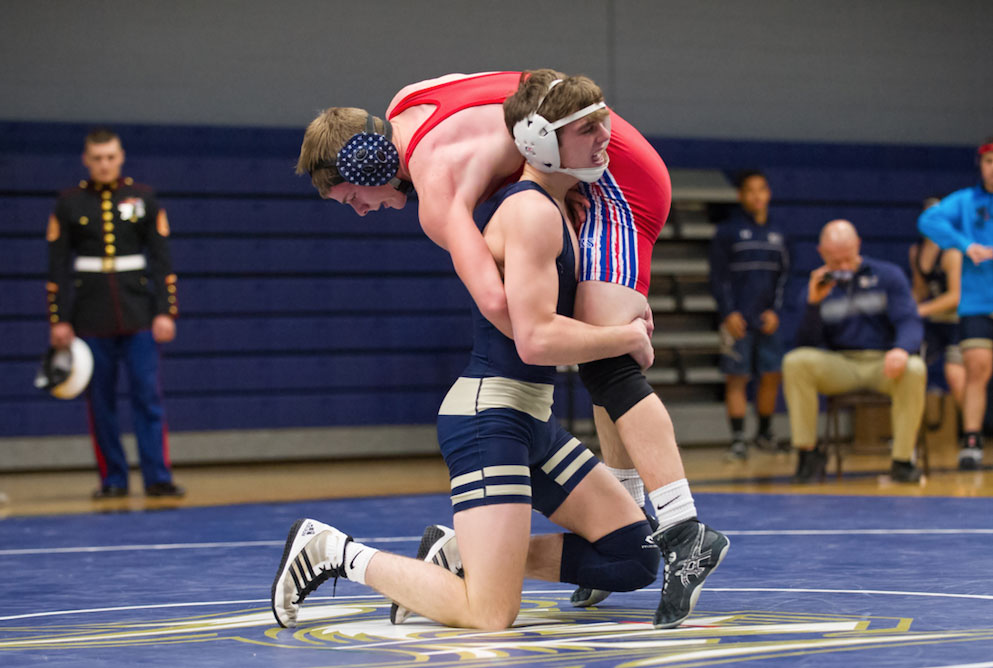 His three losses came at the Dvorak, where he and his mates ventured into the land of 2A and 3A giants, much to the delight of the Knights star, and IC’s first year head coach, Kevin Sliva.

“I thought it was a good time to expose not only Joey, but the Vargas boys (Victor and David) to some high profile competition, as well as to let people know that IC Catholic is alive and well at 1A (and) has some pretty good talent of its own,” said Sliva, who was a state qualifier in his senior year at Hinsdale Central in 1996.

“I was thrilled when I heard we were going to the Dvorak (it) was a great opportunity to see how I stood against some of the best, and when it was over, I felt I could go with those guys,” said Bianchini, who would finish sixth overall at 138 pounds.

Bianchini would open with a win over No. 6 Giovanni Cassioppi (Hononegah) then fall in overtime to No. 3 Jacob Dado from Marist, and later dropping a 6-4 decision to two-time 2A state champion, We Rachal of Chicago Washington.

“It was great to put the IC Catholic name out there at the Dvorak (and) letting everyone know we have a quality program, and one that will get better and better,” began the four-year veteran.

“For me, knowing I was right there with all three of those state ranked guys gave me a real confidence boost, and now I’m ready for anything that comes my way from here on out,” says Bianchini.

Truth be told, it was constant reminders, and a stern talking to from his coaches at Izzy Style: Justin Pearch, Mikey Benefiel and Izzy himself that helped put the final piece of the Bianchini puzzle together.

“All three of my coaches told me my technique, style and tactics were all where they had to be in order to be a success – but the one thing holding me back was the mental part of my game,” admits Bianchini.

“They said once I master that, the sky is the limit, and somewhere between my sophomore and junior year, something clicked, and it all came together, and it’s been great ever since.”

Bianchini would begin in Park District wrestling, then move to the Schaumburg MadDog Academy, before settling into Izzy Style.

Bianchini says baseball was his first love, and he would play through the eighth grade, then, forego his favorite sport in order to play football and wrestle in his freshmen year after deciding IC Catholic would offer the type of academic challenge he preferred. 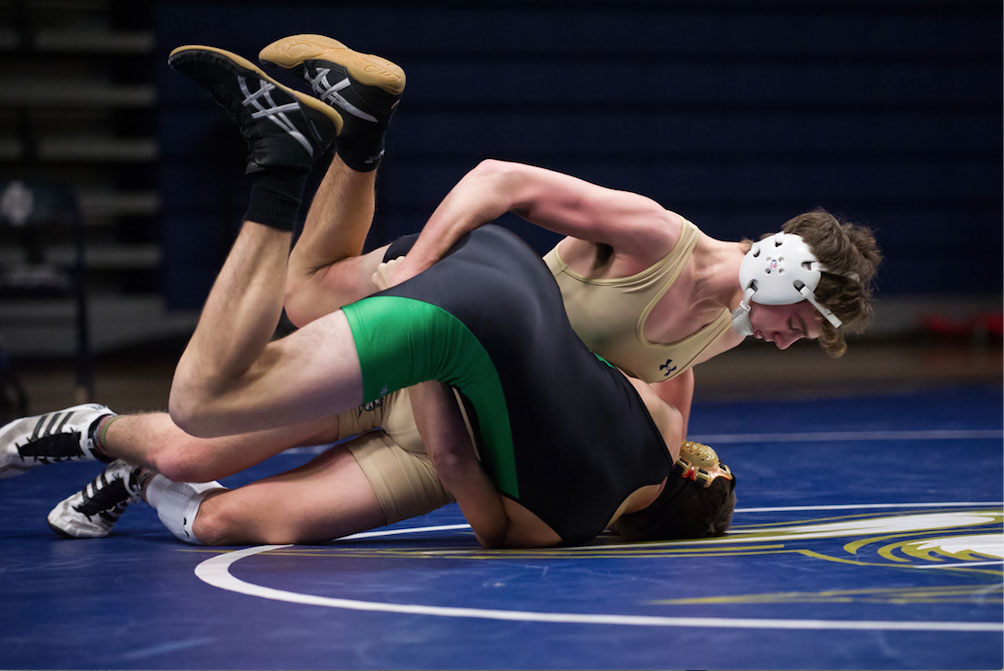 He would earn MVP honors as the Knights starting QB during the fall of 2015, but his pigskin career would end after one season with his full attention and focus now with wrestling.

“IC was the perfect fit for me as a student-athlete, plus to be a part of a new program, and to help put us on the wrestling map was important to me also.”

His resume on the mats is as long as his arm.

“He’s wise beyond his years, and such a tenacious and intense competitor, and for our coaching staff, we all (do) what we can in order to prepare him for his matches (then) sit back and just watch.”

“IC has been very fortunate to have a young man like him right from the very start of its program.”

Silva has surrounded himself with an all-state coaching staff, including former 1997 Big 12 runner-up, Matt Mulvihill (Iowa State) and Corey Stanley, who starred at Iowa from 1998-2001.

“The thing about the staff here at IC is we all work towards the same common goal, and we all share in the responsibilities, because we all realize it’s about the guys, and not titles of head or assistant coaches,” says Sliva.

“We have a great coaching staff, it’s of the highest level,” offers Bianchini, who will go with Stanley in the room as often as he can.

Bianchini says he’s ready for the challenge which lies ahead during this final stretch of his brilliant career – waiting until that final whistle in Champaign before sorting out his college options.

He already visited Brown University of the Ivy League during a camp in the offseason, and was impressed with a recent trip to St. Cloud State.

“College coaches came to watch him last year and were thinking they would be getting a 125-pounder, but after going through such a growth spurt since state last year, he might be anywhere from a 33 or 41-pounder once he gets to college,” opines Sliva.

Wherever the affable Bianchini ends up, he will leave behind a legacy and importance to IC-Catholic that will not be forgotten for quite some time.

“There was that sense of relief after winning that state title last year, but the chance to win a second straight for myself and the school is what continues to drive me during my work, in and out of the room, and when I compete.”

“All of that extra work has paid off thus far, but I’m not done yet, so the focus has to continue until my very last match.” 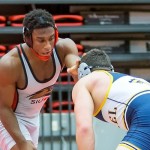