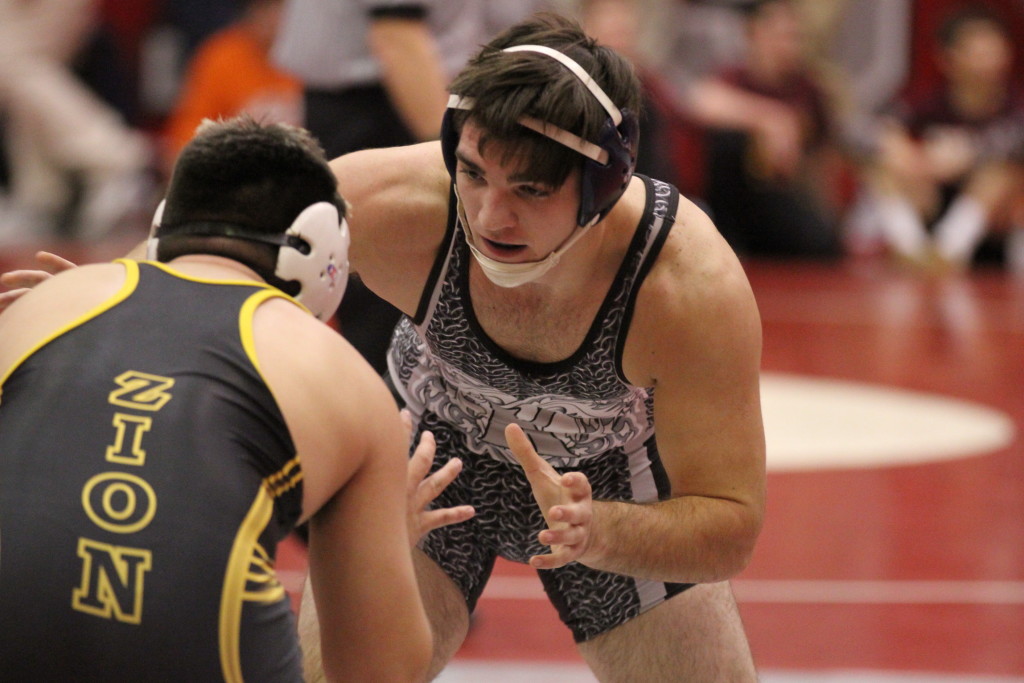 Riley Vanik had success in Champaign and then he didn’t, leaving his senior-year goal a simple one.

The Kaneland senior won a tournament title at 182 pounds at this year’s 32-team Berman Holiday Classic tournament. He beat Lincoln-Way East’s Nick Mihajlovic via 4-0 decision on the title mat, improving to 16-1 on the year.

Vanik placed sixth in Illinois in Class 2A at 160 pounds as a sophomore, and qualified downstate at 170 last season. After each of those finishes, he noticed a trend in his off-season wrestling.

“The past two or three years I’ve been cutting down but I noticed over the summers that I usually wrestle better when I have a little more weight on me,” Vanik said. “I’ve only cut four or five pounds this year and I feel strong in all of my matches.”

Vanik decided after last season to put 170 in his rearview mirror, so he stood on the gas pedal on his way to 182.

“The weight room was a big part of it, and a lot of eating,” Vanik said. “A lot of sensible eating – chicken and broccoli, sometimes steak — but I wasn’t on a restrictive diet. I tried to eat healthy but if I wanted something that wasn’t as healthy…”

“(The Vaniks) live in the same neighborhood as me and they’re always doing it up right, as far as food goes,” Orosco said. “The kid likes to eat, and last year I think the cut was a bit much. This year he doesn’t have to worry about it as much so he’s able to just go out and do what he needs to do.

“I knew that whatever weight he wanted to wrestle, he was going to do well at it. His only loss on the year is to Cody Baldridge.”

Baldridge wrestles for Morris and is ranked #1 at 182 in 2A per Illinois Matmen’s Go Earn It Wrestling Apparel rankings. Vanik is ranked #3 behind Carbondale’s Cameron Caffey.

Baldridge won a 3-2 overtime decision against Vanik on Dec. 8.

“It was an okay match,” Vanik said. “There wasn’t a lot of moving in that match and if I would have moved my feet more, things might have been different.

“Early in the season I felt like I was trying to rush things because I wanted to be the best, right away. But in this sport you take your lumps and you keep working to get better every single day.”

Top-seeded Vanik opened the Berman with a pin and a major decision win, before winning 7-1 in his semifinal match against Zion-Benton’s third-seeded Eric Ospina, and then beating second-seeded Mihaljovich for the title.

“I wasn’t dominating my matches enough last year. I spent a lot more time in the weight room since then and tried to work out at least five days a week during the summer. I did more conditioning last year than I did this year. This year, my offseason was focused on getting bigger and stronger.”

Kaneland had five medal-winners at this year’s Berman and placed eighth as a team. The Knights’ Austin Kedzie also won a title at 120 pounds and Colin Gussman was second at 220 pounds.

The Knights only entered nine wrestlers in the tournament.

“We only have about twenty kids on the team. We’re not really a dual team but as a tournament team, we’re doing all right,” Vanik said. “It can be hard in the practice room when you don’t have a lot of kids there but you have to keep thinking about what you’re trying to accomplish, and what you want to do with the rest of the season.”

Kaneland also got a fifth-place finish from Hayden Patterson (170) and an eighth from Nathan Orosco (106) in Palatine. Kedzie improved to 10-0 with a pin of Rock Island’s Nate Shesky on the title mat, and Gussman improved to 15-2 during the two-day Berman.

“We have a pretty tough schedule and we came rolling in here with only five scoring wrestlers,” Orosco said. “You always want to go after those top six or seven guys in the rankings whenever you can, so sometimes you have to move up or down to get some of those guys, and that’s what we want to do.”