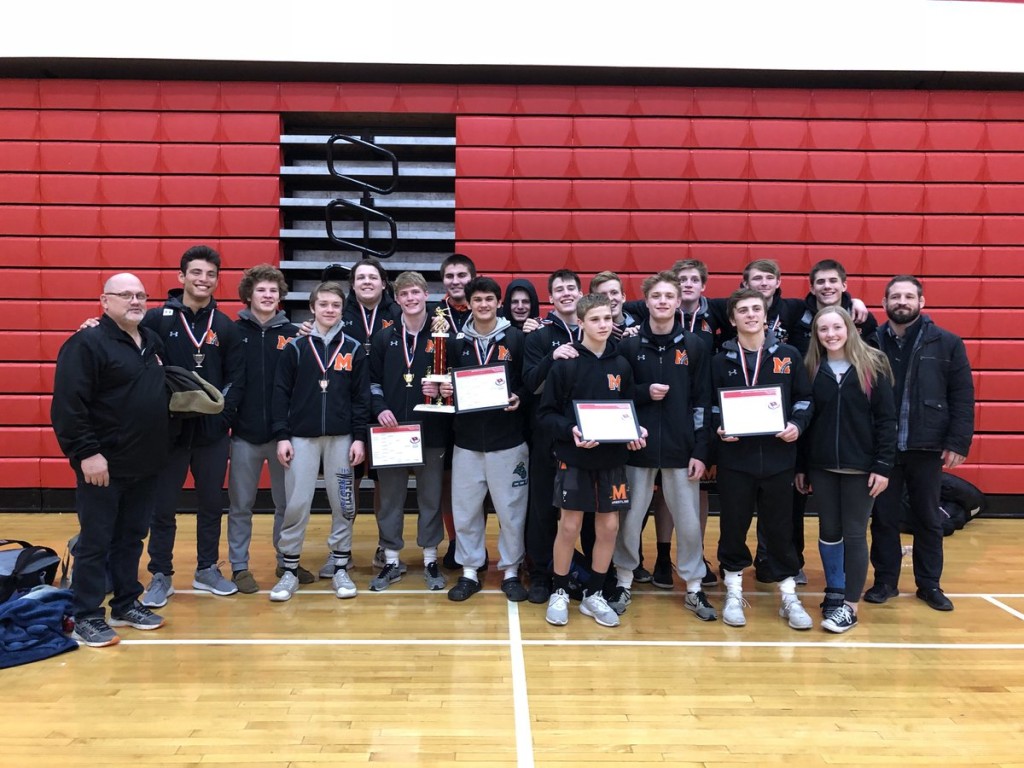 Minooka runs away with Berman title

The field at the 63rd annual Berman Holiday Wrestling Classic was hit by a stunning full day performance by Minooka, which led from start to finish to lift the championship team title by 108.5 points over runner-up Lake Park.

The Indians all-day party never fizzled at host Palatine High School with Bernie Ruettiger’s men capturing four individual titles, and 14 medals overall to run away and hide from its challengers to win for the first time since 2009 when it beat rival Lockport 207-188.

“This wasn’t the tournament it’s been for such a long time, but we still were happy to come here to compete against quality opponents (and) for us, it was just good for the guys to get three-four matches in after a very busy first half of the season,” said Ruettiger, whose club had just competed at the Rex Whitlach, where it finished ninth in the final standings.

“It’s been a work in progress thus far for us, but it’s slowly coming together as we continue to sort things out and work through the little things, but we’re getting closer with each day,” Mike Kimbelin, one of Ruettiger’s assistants, would add while watching the Indians climb one-by-one up the podium to collect their prize.

“Each week this team is getting better, we’re getting everyone back and healthy, and we should be in good shape for the second half of the year,” said Adam McDowell (10-4) who would be one of the four Indians to win it all, his title coming at 138 after edging Daniel Alaniz of Zion-Benton, 2-0.

Teammate Jack McClimon (106, 15-6) would get the final session going with a 10-3 decision against Maine South freshmen, Noah Beltran, which was followed shortly thereafter by a strong performance by Austin Markee (16-5) during his 11-2 major decision effort at 120.

Senior Dominic Ruettiger (13-6) would give the Indians four titles in the first five title bouts at 132 pounds with a 15-9 victory, which kept the Minooka faithful on its feet, particularly during a wild third period of action.

“I knew he (Daniel Uribe, Leyden) was dangerous after watching him earlier, but I also knew I could get (in) and get a lot of take-downs,” began Ruettiger.

“(But) he didn’t go away, and I gave away some points that I shouldn’t have (so) it was important to stay composed and keep my head straight towards the end in order to get the win,” said Ruettiger, who conceded a low single, then a take-down near the edge to bring Uribe within one (10-9) until he pulled away with a take-down and back points to ensure victory.

The tourney champs may have won nearly all that was available to bring home, except for two other awards – the best of the rest going to Cole Riemer and Matthew Hennessey at days end.

Riemer would earn Outstanding Wrestler honors following a remarkable three match effort that saw the Fremd senior pin his way to the 145-pound crown, his last of the day coming at 4:12 against Martrese Smith (19-2) of Zion-Benton.

“You saw how dominant and explosive Cole can be, but it’s been his hard work, in and out of the room, plus dedication to getting better that he won the way he did today, and why he has been as successful as he’s been thus far,” said his coach, Dan Ruettiger.

“I was thinking just the other day about my only two losses of the season (to) Patrick Ryan (New Trier) and Liam Drury (Hinsdale Central) – and it all came back to me changing my approach (back) to the way I would compete in freestyle,” said the 2017 state qualifier, who is now 21-2 overall.

“It’s not an excuse for those two losses (both) were high quality opponents, but I really believe I’m at my best with that particular style, and I know for a fact that it worked during the summer when I was training with Izzy and having success there against state ranked guys like Kendall Coleman and Gannon Hughes, so I’ll have to incorporate more freestyle against my opponents from here on out.”

“I’ve been dealing with swollen glands, and right now I’m not feeling really well,” said Kemp, who pointed to the ‘oversized’ area along the right side of his neck which easily would increase his dress shirt size because of it.

“Not being 100% is no excuse, but I tried to stay in good position, and not take too many unnecessary chances, and that seemed to work well enough today,” opined Kemp, who feels training with four-time state champion, Austin O’Connor at Izzy has gone a long way towards his strong first half start thus far.

The aforementioned Matthew Hennessey (Plainfield North) stands atop the best of all at 220 pounds in the current ‘Go Earn It’ polls published by Illinos Matmen, and the Old Dominion-bound star showed no signs of slowing down on this day.

Hennessey (20-0) not only pinned his way to third major of the season, but he did it in record time – using just 2:53 minutes to squash his three opponents en route to his Berman Holiday Classic crown.

“With each week, I’ve been trying to increase my arsenal of weapons by opening things up a little bit more (all) with the design in mind to be a peak performance when the postseason begins,” said the affable Hennessey, who won at the Hruska Classic and recently, the Whitlach.

Lake Park senior Vince Liebich (25-1) made it two tourney wins in a row after he successfully held off a gritty performance by Fremd senior, RJ Cortez in his 152-pound final.

“It wasn’t my best effort of the season, but some of that was because of (Cortez) who fought hard and didn’t really give me much of a chance to open up more,” said Liebich, who won last week at the Glen Erb Invite at Glenbrook South.

Not to be outdone by his teammates at Mundelein, junior Logan Kvien impressed from start to finish at 195 – which ended in style with a pin at 5:54 over James Bartell (9-1) of Maine South.

“Most of my matches have come at 195, and while most of those opponents are a little bigger than me, I’ve felt really comfortable against almost all of them,” said Kvien (21-3) who with his three pins on the day now has 20 on the season, five away from the program record of 25.

Just down a weight from Kvien stood 2A star, Jaden Glauser (Richmond-Burton, 19-0) who came over from McHenry, where a year ago he would shine brightly during his rookie campaign with a well deserved fourth-place state medal.

“We moved as a family (late) and it’s been difficult getting comfortable with my classes and with meeting new friends, but fortunately for me, the room, my teammates and coaching staff at Richmond-Burton has been terrific to help make things a little easier,” said Glauser,

After a hard-fought 6-2 decision in his opener, the sophomore unloaded on his next two opponents, registering two quick falls (1:42 and 1:10) to close out the field at 182 pounds.

“I’m just working hard everyday to prepare myself for what hopefully will be a state final against the No. 1 guy – Cody Baldridge of Morris.”

Around the rest of the divisions, Oak Forest junior Tony Kluk (22-1) had little trouble in winning his tournament trophy at 170 – recording three falls en route to his successful day.

St. Patrick junior, Justin Davis (13-10) had plenty to celebrate following his third pin of this long day, his coming at 3:31 over Chris Alvarez of Lake Park in the 285-pound finale

With a new head coach in place (former Libertyville star, Jeff Keske) and a full-blown rebuilding program in place – the longest running wrestling tournament in the state of Illinois took on a new look this year, yet still hosted several quality sides, including Minooka, which last season would tie with southside rival Lincoln-Way East for 16th.