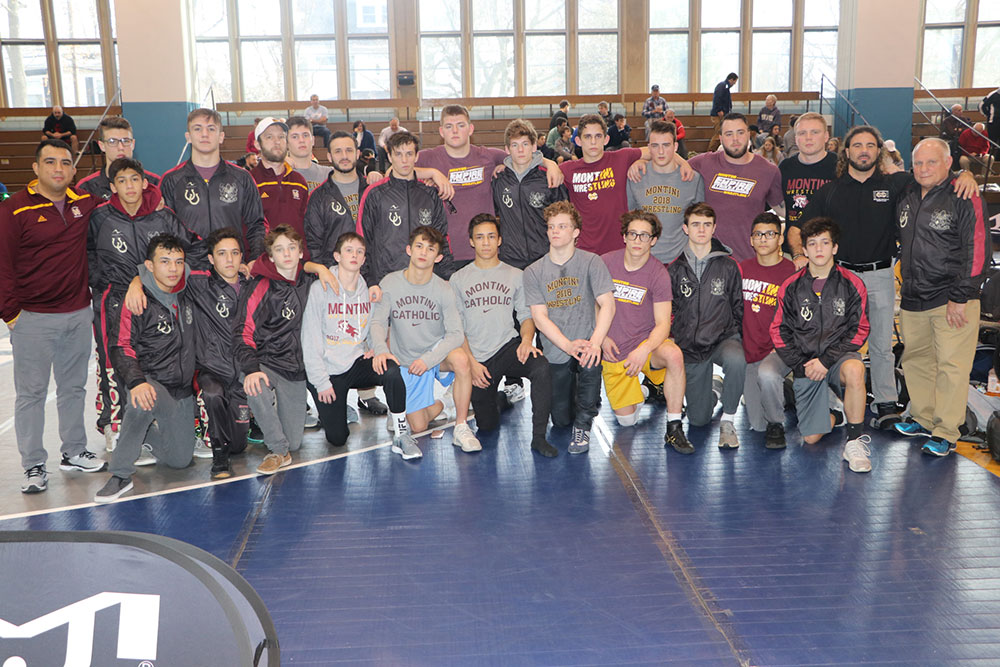 Cross-country flights, trips to Times Square and beating the No. 1-ranked team in the nation.

Such is a weekend in the life of the Montini wrestling team.

After the Broncos have steamrolled their Illinois opponents all season and beaten up on teams all over the Midwest, Montini took its shot at earning the No. 1-spot in the nation Saturday in Pennsylvania.

As one of six teams – and five ranked in the top eight by InterMat – competing in the event, Montini went 1-1 Saturday at the MyHOUSE Melee in Kingston, Pa.

At the star-studded event, the Broncos – ranked No. 4 in the country by InterMat – fell to host and No. 3-ranked Wyoming Seminary (PA) 30-23 but bounced back with a 32-30 victory over No. 1-ranked Bergen Catholic (NJ).

Getting into the event took just as much work and cooperation from Montini officials as the Broncos put forth competing in it, but in the end the school and the team made it happen.

“It was amazing when we realized logistically and financially – with the backing of our school – that we could make this happen,” Martinez said. “What a great day. When we first told the kids we were going they went nuts. It was like we won a prize. They were jumping and hugging each other because they want to compete against the best.”

After Montini tried but was unable to be part of the Who’s No. 1 Duals in New Jersey in mid-January, the Broncos left late last week for the MyHOUSE Melee. The team flew from Chicago to Newark, NJ, and then drove to New York City, where it spent the night. The next day, the team drove nearly 2 ½ hours to Kingston to compete in the duals.

The Broncos only wrestled a pair of duals in the two-day event but still made a statement with the win over the nation’s No. 1-ranked squad.

“The team we have this year is unreal because of our senior captains – Joey Melendez, Will Lewan and Real Woods,” Martinez said. “Those guys have been able to put this program in the spotlight we’re in. It’s been great to watch them learn as leaders and help take our other kids to the next level. I would probably consider this the best team I’ve ever coached and it’s in large part to our team leaders.”

The kids came back to Illinois on Sunday, while Martinez and some of his coaches flew back Monday – and then headed right to practice.

With the postseason less than a week away, the Broncos had to get back to work.

As the No. 1 team in the current Illinois Matmen Power Rankings and the best team in the Midwest, Montini is aiming for a big postseason. But while the Broncos have accomplished a lot over the last two decades – including 13 dual team state titles – they’re looking to accomplish the one thing Montini hasn’t won so far – a Class 3A dual team state championship.