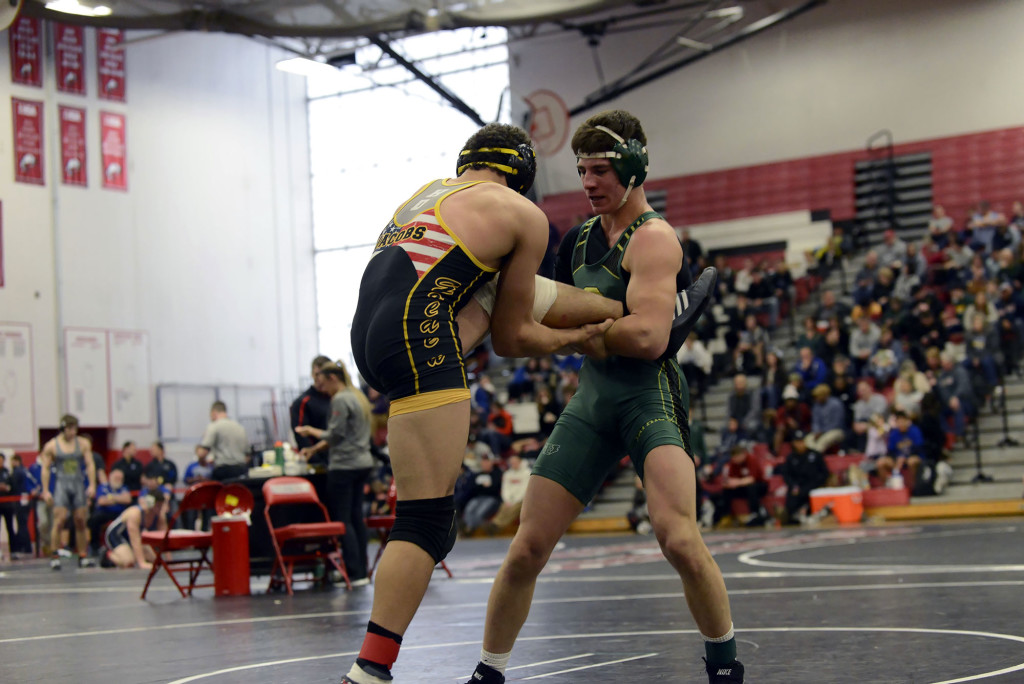 In retrospect, it was only fair of his teammates to cheer and celebrate wildly the heroics of this 170-pounder – as he (too) has provided inspiration for those on hand, as well as a Patriots program and head coach, which have become his second family to him, ever since stepping into the room four years ago.

Nepomnyashchiy was born in Voronezh, Russia, and came to the United States along with his mother, Oksana, in 2010, just before he entered sixth grade.

He spoke little or no English, but when he signed on to take part in the Patriots wrestling camp in eighth grade, his life would change forever.

“That’s because wrestling was fun, and I met coach (Shane) Cook,” said the Patriots senior.

“You could tell he was a worker, and was a real sponge, always wanting to learn to get better, and even to this day, I’ve had to kick him out, and tell him to go home (because) he stayed two hours after practice to work on certain moves, conditioning or something associated with wrestling,” said Cook.

“The kid fell in love with this sport. He had a real passion for it, and it showed in his committment, and desire to learn, and just as his English improved, so did his wrestling,” added Cook.

Nepomnyashchiy was in the Patriots starting lineup for the North Suburban Conference (NSC) tournament, and either meet directors didn’t want to, or know how to spell his last name – but in his bracket, he was listed as: Nikita Nepo.

That sophomore year, 2015, he would finish fourth at regionals, and end the season with a respectable, 22-15, not bad for someone who had just come into the sport just two years prior.

“You could see we had something very special with Nikita, and, again, his voracious work rate and work ethic was allowing him to quickly catch up to guys who had been wrestling for several more years then him,” said Cook.

But things would soon change for the quiet, but affable Nepomnyashchiy.

On a trip back to Russia in the fall of his junior year, his mother, not feeling well, saw doctors there, and they would diagnose her with cancer. At that time, they strongly suggested she get back to the United States where the care and treatment would far exceed what she could expect there.

It didn’t take long before it was deemed she had bone cancer, and her treatment would begin aggressively as doctors would attempt to slow down what soon would move quickly throughout her body.

“It was nasty, it grew so fast,” says Cook, who (when) talking about the months during Oksana’s chemo (still) has a difficult time recounting the story – witnessed by the several stops and starts during our conversation.

Cook remembers following the 2016 season, he and his staff its annual postseason awards banquet, to which Nepomnyashchiy was unable to attend – instead opting to be at his mother’s bedside at a Northwestern Hospital in Chicago.

Following the banquet, Cook and his assistant, Mike Martinez, would drive down to the city, with awards in tow for Nikita, and his mother when they arrived after 10:00 that evening for their visit.

Oksana Nepomnyashchiy would pass away within days at the age of 38.

“It was a tough time for all of us – fortunately for Nikita, he had wrestling, his teammates, but more importantly his stepfather, who had married his mother after the two carried on a long distant relationship – between Russia and here – until he finally convinced her to come here,” said Cook.

“Nikita and his stepfather are real tight, he loves him just as if he’s the biological father, it’s a great relationship the two have, and real heart warming to see those two – they’re so good for each other.”

So too, has been wrestling.

Last season, he enjoyed a break-out year, capturing a NSC title, and a spot in the state field at 170 pounds, with a dazzling 36-6 record.

“I was excited to be there, and I knew physically I could win a state title, but not mentally, so it was quick stay in the tournament for me,” admits Nepomnyashchiy, of his one and done trip to Champaign.

Life would change once again – first, for the worst, then better – MUCH better.

During preseason nationals, he would feel a little ‘something’ in his shoulder,

“At first, I thought – whatever – I’ll just work through it,” says the Patriots star.

“Later, it began to hurt – really hurt, and then, I knew something bad had happened.”

What happened was a tear in that injured shoulder, and doctors would say he would most likely miss the entire 2016-2017 season.

“The first thing I said to myself was, oh no,” began Cook, “but I also knew Nikita, and there was NO WAY he would miss his senior year.”

Hours upon hours of rehabbing all throughout the offseason helped put him in the Patriots starting lineup for the high profile Moore-Prettyman at Barrington, but winning his first two matches on day No. 1 – he would bow out before his semifinal with Nate Jimenez.

“At that time, we were in for the long haul – it was all about getting him healthy for the stretch run,” Cook would say.

In and around his injury, and the Moore-Prettyman, finally some good news would come his way.

While training under former Highland Park, and University of Illinois great, Michael Poeta at his center in Lake Forest, Poeta would arrange a combine for college coaches to attend, and when University of Michigan assistant, Sean Bornet got a look at Nepomnyashchiy he couldn’t believe his eyes.

“Sean did a double-take,” said Cook.

Soon thereafter, a visit there, along with trips to Northern Iowa and Illinois would see him sign his letter of intent with Michigan.

“Not bad for a kid who wasn’t a state champion or state medalist, or someone who had been in the sport since he was six, huh?, opined Cook.

“I knew right away Michigan was the place for me,” added Nikita, who did, however, find time during an annual trip back home to visit family, to train with at an elite camp for 28 days, 20 of them on the mat.

Last weekend, Nepomnyashchiy would be opposite work-out partner, Jaden Glauser of McHenry in that 170-pound final, and the Patriots senior would give his friend his first defeat of the season with a 6-4 decision in overtime – much to the delight of his teammates who rattled the Barrington rafters with their cheers.

“There’s no way I lose that final with all of my friends and teammates supporting me like they did,” said Nepomnyashchiy, now 18-1 on the year.

“I cannot tell you how much I appreciate my teammates who have been right there with me from the very start – it’s how things are in our room, all of the time, and the credit for that belongs to coach Cook.”

“I am so thankful for a man like him. He was there, for every step of the way when I first came to Stevenson, and all throughout when my mother was so ill, and he remains at my side with everything.”

“It’s because of coach Cook that I feel like I can win it all this weekend.”