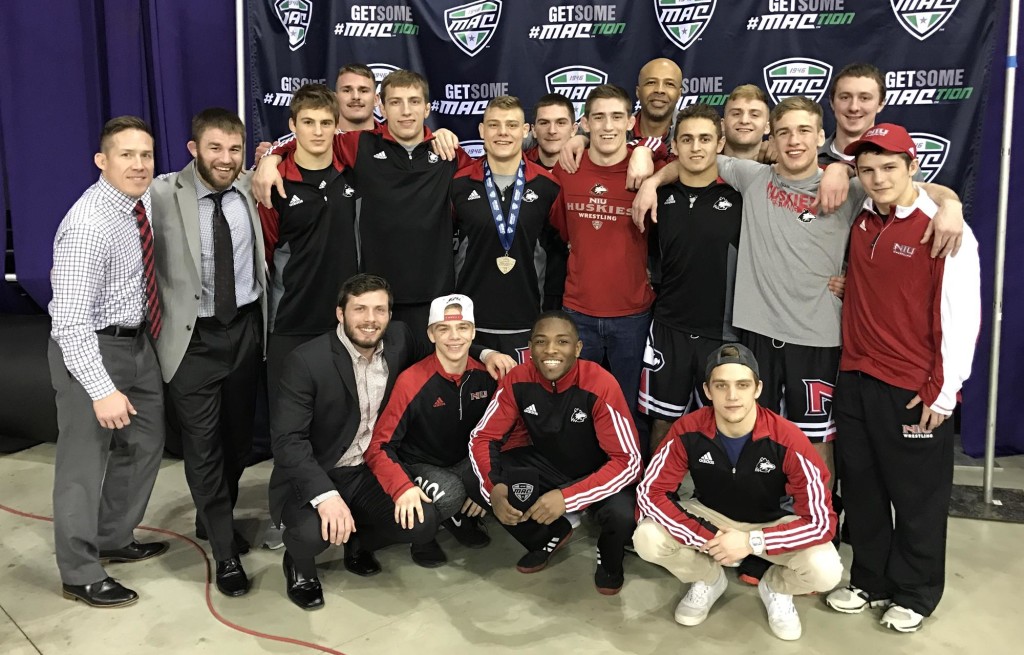 NIU Sends five to NCAAs, most in 32 years for Huskies

CEDAR FALLS, Iowa – The Northern Illinois University wrestling team capped off the 2017 Mid-American Conference Championships with seven grapplers on the podium and all ten wrestlers scoring points for the team. The Huskies finished in fifth-place out of the nine-team field, just two points behind Old Dominion in fourth.

The Huskies’ 92-point finish is the most points NIU has ever scored at the conference championship. The previous record was set in 1985 when Northern Illinois scored 89 points and captured the MAC title.

After this weekend’s success, the Huskies will be well represented at the national level. A total of five wrestlers qualified for the NCAA Championships, the most to qualify since 1985 (when NIU’s MAC Championship team sent six to the next level).

“We’ve talked about coming out and taking control of the matches and getting into an attacking style and we came out and did that again,” said head coach Ryan Ludwig. “I thought every single person had a great attitude and great effort throughout the tournament to put up the team points we needed to make a great statement.”

The afternoon started off on a high note as true freshman Brock Hudkins (Danville, Ind./Danville) took his opponent into overtime with a 1-1 tie. Hudkins and Missouri’s Barlow McGhee battled until the very end, but Hudkins secured the win for the Huskies, 2-1, and earned an NCAA automatic bid. In the final round of the consolations, Hudkins was awarded third place due to a medical forfeit from Buffalo’s Kyle Akins.

“Brock has really matured over the second half of the season and more so this particular weekend,” Ludwig commented. “He really believed in his attacks and his offense and wrestled a great match against McGhee to push himself through and put himself in a position to qualify. I’m really proud of his efforts and qualifying as a true freshman.”

In the consolation semifinals at 149-pounds, Steve Bleise (Chelsea, Mich./Chelsea) took an early lead against Nick Barber from Eastern Michigan and maintained control the entire match. Bleise had a last second takedown to secure a 5-2 win by decision and punch his ticket to the national tournament. Later the in the day, Bleise fell to No. 2 seed Justin Oliver in an 8-0 major decision, placing 4th.

“Steve had a tough matchup with Barber, they’re guys that know each other well…but he was able to put together his match and get to his leg attacks and do the job he needed to do to qualify,” Ludwig said.

At 165-pounds, Shaun’Qae McMurtry (Lockport, Ill./Nebraska) picked up the Huskies’ second pin of the championship, pinning Isaac Blast of Kent State in 5 minutes and 18 seconds to win the consolation semifinal. After a few hours of rest, McMurtry was back on the mat for finals, stunning his opponent in a commanding 14-3 major decision. The win earned him a third-place finish and automatically qualified him for his first national tournament.

“McMurtry may have been the performance of the day. He did a fantastic job against Kent State,” Ludwig said. “He looked as good as I’ve seen him look in the third-place match. He did an outstanding job; his mindset was right and his style was great.”

In the championship finals, Trace Engelkes (Winnebago, Ill./Winnebago) fought a tough battle against the No. 1 seed Taylor Lujan at 174-pounds, but fell in a 12-2 major decision.

“Trace had a gritty performance in the finals. It didn’t go his way but he did a fantastic job to get to the finals in a really tough weight class. We’re pleased to punch him through to the NCAAs.”

In the Huskies’ final dual of the consolation semifinals, Shawn Scott (Holly, Mich./Holly) kept it tight during all three periods and was award riding time to tie the score, 2-2, at the end of regulation. Scott, however, exploded in overtime and walked off the mat with a 6-2 win by decision and an automatic bid to NCAAs. In finals, Scott fell to Northern Iowa’s Jacob Holschlag in a close 6-4 decision, placing 4th.

“Shawn got dinged up during the tournament, but for him to reach down and grit through that and do what it took to get him to the NCAAs is a testament to his leadership and his toughness.”

Angel Velasquez (Modest, Calif./John H. Pitman) fell in a second-round tiebreaker, 2-1, to finish in sixth place at 141-pounds. Alijah Jeffery (Marion, Iowa/Linn-Mar) picked up an eighth-place finish for the Huskies while both Caden McWhirter (Prattville, Ala./Prattville) and Caleb Gossett (St. Charles, Mo./Francis-Howell) were awarded seventh-place finishes after medical forfeits at 157 and 285, respectively.

“Obviously, the upward trend is on display here at NIU. I’m really proud of the effort in every single guy that competed.”

The NCAA Championships will take place in St. Louis, Mo. on March 16-18. The at-large bids will be announced on Wednesday, March 8.