College Park, Md. – Fighting Illini wrestling won seven of ten matches, including five with bonus points, to rout the Maryland Terrapins, 30-15, on Sunday morning at the XFINITY Center. After beginning the dual on an 11-0 run, the Orange and Blue clinched the dual victory with a 19-0 run by Kyle Langenderfer, No. 1 Isaiah Martinez, No. 12 Zac Brunson and No. 14 Emery Parker. The 11th-ranked Illini improve to 1-1 in the Big Ten, while Maryland falls to 0-2.

“It was a good effort today,” said Head Coach Jim Heffernan on the first win of the Big Ten season. “Our guys wrestled hard and competed well.”

Wrestling the Terrapins for the first time since 2006, the Orange and Blue sprinted out to an 11-0 lead with three consecutive by Travis Piotrowski, No. 4 Zane Richards and Mousa Jodeh.

“It was a good rebound [performance] for Travis [Piotrowski] and Mousa [Jodeh],” said Coach Heffernan. “Travis got us off to a good start, fought the entire match and found a way to score in the third period.”

Richards (14-1) extended the Illinois lead with a dominating performance against Alex Vargas, defeating the 133-pounder by technical fall, 24-8. Richards wore out Vargas with 10 takedowns in the match, only allowing Vargas to score points off of escapes. Richards added a two-point near fall at the end of the third period to clinch the five-point victory.

Richard’s victory marks the 96th of his career, tying him with former Illini Nate Patrick (1998-01) for 24th on Illinois’ career wins list.

Mousa Jodeh pushed the Illinois lead out to 11 points with a 5-4 victory over Jhared Simmons at 141 pounds. Arguably the most exciting match of the dual, Jodeh allowed a takedown in the first period but was able to use two escapes to enter the final period tied, 2-2. In the final frame, Simmons retook the lead with an escape and held the lead with less than a minute remaining. With 40 seconds left on the clock, Jodeh was able to notch his first takedown of the match to gain the lead, 4-3. Simmons was able to work an escape before time expired, tying the match, but not before Jodeh had surpassed one minute of riding time to win the match.

After Rutgers got on the board with a pin by No.16 Alfred Bannister against Eric Barone (3:49), the Illini put the match away with four straight bonus-point victories from Kyle Langenderfer, Isaiah Martinez, Zac Brunson and Emery Parker.

Langenderfer (13-4) bounced back from a tough loss by pin on Friday night with early dominance in a 13-4 major decision against Justin Alexander. The Illini junior came out with a high level of aggression in the first three minutes, earning a quick takedown and turning it into four back points. After an Alexander escape, Langenderfer ended the opening period with a second takedown, leading 8-1. After a quiet second period, Langenderfer earned five more points, including one for riding time, in period three to earn the bonus point.

At 165 pounds, Martinez (14-0) overpowered Josh Ugalde, wearing the Maryland grappler down with nine takedowns and a four-point near fall to earn the technical fall in just three minutes of action. The 24-8 victory marks the fifth technical fall for Martinez this season, tops on the team.

The dominance continued at 174 pounds, as No.12 Zac Brunson recorded his team-leading sixth fall of the season, pinning Sam Rowell in 5:31. Brunson (19-3) began the match with a takedown, and then earned six back points while riding out Rowell to end the period. The Illini senior added an escape and two more takedowns in the next two periods to lead 13-1. On the second takedown, Brunson was able to get Rowell on his back, earning the fall 31 seconds into the third period.

184-pounder Emery Parker finished off the 19-0 with a 19-9 major decision of Idris White, stretching the Illinois lead to its biggest margin of the day, 30-6.

Parker (18-3) totaled eight takedowns to control the match, three in each of the first two periods, while only allowing a takedown to White in the final period. The four-point victory marked Parker’s team-leading 14th bonus-point victory.

With the dual already clinched for the Illini, Maryland earned victories in the final two bouts of the dual. At 197 pounds, David-Brian Whisler held on for a 4-3 decision over Andre Lee despite the Illini sophomore’s takedown in the closing seconds of the match. The Terrapins added six more points on an injury default victory against Deuce Rachal at heavyweight.

Next up, the Orange and Blue will have a week to prepare for the No. 4 Ohio State, as the Illini travel to Columbus, Ohio to wrestle the Buckeyes on Sunday, January 15 at 1 p.m. central time. The match will be streamed live on BTN Plus, which fans can watch with a paid subscription.

Illinois improves to 5-0 all-time against Maryland. Illinois had not wrestled since 2006 when they defeated the Terrapins in College Park
Zane Richards victory over Alex Vargas marked the 96th of his career, tying him with Nate Patrick (1998-01) for 24th on Illinois’ all-time list. Carl Perry (1997-00) sits in 23rd with 98 career wins.
Zac Brunson notched his team-leading sixth pin of the season, 18th of his career. He moves within two pins of entering the top-10 for career pins (Troy Tirapelle, 20)
Martinez recorded his team-leading fifth technical fall of the season, while Parker issued his 14th major decision of the season to lead the team
Travis Piotrowski won his first career dual match, defeating Michael Beck by a 6-1 decision
Mousa Jodeh notched his first Big Ten dual victory with a 5-4 victory over Jhared Simmons. 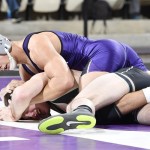 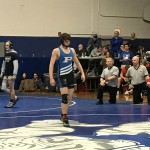