TEMPE, AZ. – Fighting Illini wrestling won their fourth consecutive dual on Sunday (1/29) evening, defeating No. 19 Arizona State by a score of 26-9. The Illini won seven of the ten bouts against the Sun Devils, highlighted by No. 1 Isaiah Martinez’s pin of No. 9 Anthony Valencia (6:49) and No. 18 Kyle Langenderfer’s 6-5 victory against No. 6 Josh Shields. The Orange and Blue improve to 6-2 overall, while Arizona State falls to 7-4.

“Pretty solid win under the circumstances,” said Head Coach Jim Heffernan. “The guys responded well and got off to a good start with Travis gutting out a win. Same with Eric [Barone], he roughed out at win and hustled for a full seven minutes. Kyle [Langenderfer] is getting better each time out, and is putting things together as the season progresses.”

After the Illini won three of the first four matches to grab an early 11-3 advantage, No. 1 Isaiah Martinez and No. 18 Kyle Langenderfer dished out the decisive blows against two top-10 wrestlers.

Ranked for the first time this season, No. 18 Kyle Langenderfer backed up his ranking by defeating No. 6 Josh Shields, 6-5, for his sixth consecutive dual victory.

Langenderfer was the first on the scoreboard, as the Illini redshirt junior got an early takedown in the opening period to lead 2-1 after three minutes. After Shields and Langenderfer traded escapes, Shields got his lone takedown of the match to start period three for a 4-3 advantage. Trailing for the first time in the match, Langenderfer quickly cut loose of Shields and then wrapped him up for the winning takedown seconds later. Shields managed one final escape, but was unable to finish any of his shots, as Langenderfer held on for the one-point victory.

The win over No. 6 Shields is the highest ranked opponent Langenderfer has defeated in his Illini career, topping his 2-1 victory over No. 9 Brian Murphy (Michigan) nine days ago at Huff Hall.

With all the momentum in Illinois’ favor, No. 1 Isaiah Martinez once again got the best of his long-time rival, No. 9 Anthony Valencia. Martinez earned a takedown early in period one to gain control, and then added another takedown in each of the remaining two periods to take a commanding 7-2 lead. Following the third takedown, the top-ranked Illini got Valencia on his back and pinned him with 11 seconds left on the clock to give the Illini three bonus points and a 20-3 lead.

Martinez is now 2-0 against Valencia this season, also beating the redshirt freshman at Midlands by a 10-1 major decision, while the pin is the fourth of the season and first over a ranked opponent since February 15, 2015 (Ian Miller).

Coach Heffernan’s got out to the early 11-3 lead on the backs of a two nail-biting victories and a five-point technical fall from No. 6 Zane Richards.

The opening 125-pound bout required not one, but two sudden-victory periods to determine a winner. After Travis Piotrowski scored a takedown and reversal in the opening period, Arizona State’s Josh Kramer battled back to tie the match, 4-4, and force overtime. After the two grapplers remained scoreless after the one-minute sudden victory period and the two 30-second tiebreaker periods, Piotrowski (13-8) picked up Kramer early in the second sudden victory period and took him down for the winning two points.

No. 6 Zane Richards picked up Illinois’ most dominant victory of the dual to extend the lead, as the Illini senior needed just four minutes, 31 seconds to earn the 18-1 technical fall against Ted Rico. Richards (17-2) led 12-1 after the opening period and earned three four-point near falls in the match. The three four-point near falls is the most by an Illini in a dual match this season.

Richards’ 18-1 victory is the 99th of his career, one shy of becoming the 23rd wrestler in Illinois history to reach the century mark.

After Mousa Jodeh dropped a close 5-4 decision at 141 pounds, Eric Barone (6-5) got the Illini back on track with an upset of Josh Maruca, 4-2. Trailing 1-0 entering the third period, but holding more than a minute of riding time, Barone was able to get an escape and then got a takedown to seal the decision.

With the match in hand, the Illini picked up two more victories following the Martinez pin with decisions from No. 12 Emery Parker (22-4) against Jacen Petersen, 13-9, and Andre Lee (9-10) over Austyn Harris, 4-2.

Arizona State recorded three decisions against the Illini, as Nikko Villarreal (141), No. 3 Zahid Valencia (174) and No. 7 Tanner Hall (HWT) combined for the nine-team points.

Up next, the Fighting Illini will travel to Evanston, Illinois for a dual against Northwestern on Friday, February 3. The Orange and Blue return to Huff Hall two days later, February 5, to host Purdue at 1 p.m.

Illini Notes:
Illinois improves to 3-0 all-time against Arizona State. The Illini beat the Sun Devils, 27-9, in Champaign last season (11/15/15)
The 26-9 victory against No. 19 Arizona State is the second against a ranked team this season. The Illini defeated No. 13 Michigan, 34-6, at Huff Hall on January 20.
Kyle Langenderfer’s 6-5 upset of No. 6 Josh Shields is the highest-ranked wrestler the Illini redshirt junior has beaten in his Illinois career.
Zane Richards picked up win No. 99 with a 18-1 victory over Ted Rico. Richards will look to become the 23rd Illini to record 100 victories in his career on Friday at Northwestern.
Isaiah Martinez’s pin of #9 Anthony Valencia is his fourth fall of the season, and his second victory over the Sun Devil 165-pounder this season. Martinez beat Valencia 10-1 in the Midlands semifinals on December 30, 2016.
The pin was Isaiah Martinez’s first over a ranked opponent since pinning No. 6 Ian Miller (Kent State) on February 15, 2015
Wins over ranked opponents by Kyle Langenderfer and Isaiah Martinez give Illinois 15 wins over ranked opponents on the season, including eight against higher ranked wrestlers. 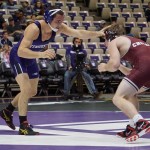