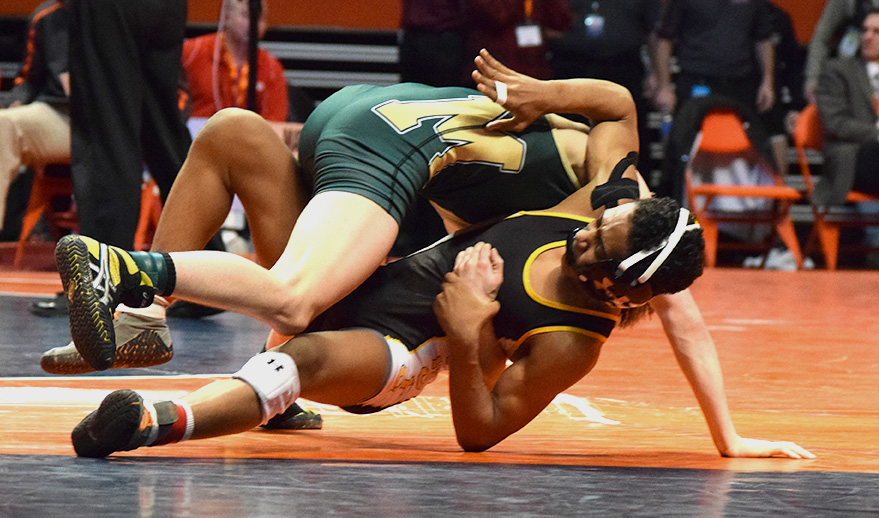 The more you see Chicago Mount Carmel, the more the Caravan appear to be the odds-on favorite to win the Class 2A dual-team state title next weekend.

But Marian Catholic stole some of the Caravan’s thunder in the semifinal round, winning five of six semifinal bouts to lead all 2A schools.

Washington advanced four to the finals, including a brother pair of its own, junior Dack Punke and senior brother Ryder Punke at 113 and 160, respectively. Also advancing were sophomore Tyler Delaware (120) and junior state champion Jacob Warner (182).

As for the Caravan, they advanced just two of their six semifinalists to the finals, seniors Jake Tucker (152) and Matthew Reyes (285). At 170, David Riojas, whose 14-0 win over two-time state champion Randy Meneweather of Washington was the highlight of the quarterfinals, couldn’t keep the momentum going, losing 5-2 to Cole Witzig of Troy Triad.

A record third brother combination reached the finals, senior Jarrid Braunagel and sophomore brother Danny advancing for Belleville Althoff in Class 1A at 138 and 145, respectively.

Oak Park-River Forest matched the Spartans by advancing five to the finals to lead Class 3A. Senior Isaiah White (160) will try for his third state title. He was joined by sophomore Anthony Madrigal (126), juniors Jason Renteria (120) and Jaime Hernandez (138) and senior Allen Stallings (220).

Madrigal and Jake Silzer of St. Rita wrestled 8½ scoreless minutes, scoring a rideout in the overtime tie-breaker. Another Huskie semifinalist, Rolliann Sturkey (170), was pinned by Sage Heller of Deerfield.

Matt Allen of Hinsdale Central eased past Anthony Cassioppi of Rockton Hononegah, 5-2 to advance to the 285-pound final against Bryan Ditchman of Lincoln-Way Central. A win would make him the third Allen brother to win a state heavyweight title.

Sandburg, Montini and Marmion each advanced three to the finals. Sandburg got an upset win from Patrick Brucki (182), who edged Jack Jessen of Willowbrook, 3-1.

Senior Brady Wilsie (126) and junior Nolan Baker (132) of Byron both improved to 43-0 with their third pins of the tournament. A day after beating defending champion Quinton Ball of Mercer County in the opening round, Grant Miller (285) of Herscher scored another stunner, beating the returning runnerup, Tommy Brown of Plano, 3-2 in the semifinals. If Miller beats undefeated John Barnes of St. Bede in the finals, he will have beaten the top three finishers from last year’s tournament. Senior teammate Anthony Rink (120) joined Miller as a finalist.

Other defending champions advancing to the finals: junior Michael McGee (120) of Plainfield East, junior Austin Gomez (126) of Glenbard North and senior Nathan Traxler (182) of Marmion in 3A, senior Hunter Grau (145) of Geneseo and senior Joshua King (285) of Hinsdale South in 2A, and Wilsie, Kyle Betourne (182) of Bishop McNamara and Wesley Kibler (195) of St. Joseph-Ogden in 1A. 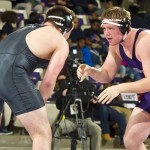 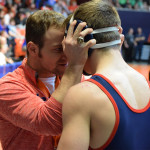