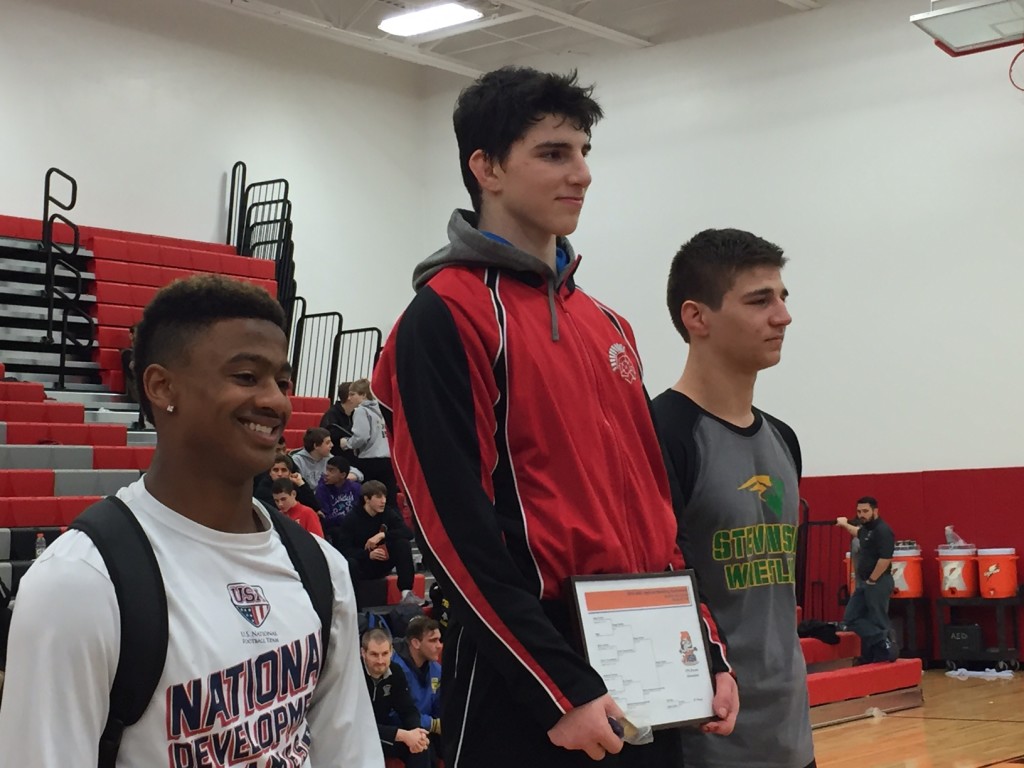 Razor Thin: A Day to Remember at Deerfield

DEERFIELD – A Hollywood screenwriter could not have possibly written a more compelling screenplay for a movie than what transpired Saturday at the Deerfield Regional. The real life drama that was witnessed by scores of fans was definitely a “must see.”

The host Warriors edged Stevenson HS by one point. Yes, one point. Deerfield bested the Fighting Patriots 164.00 to 163.00, in what had to be the closest IHSA match in history.

It came down to a tiebreaker, actually two. The first was unsportsmanlike conduct of which neither team was assessed. The second and declarative tiebreaker was the number of champions at the regional. Deerfield had five to Stevenson’s one. It sounds simple but it was far from that.

There was plenty of great wrestling throughout the day. After the first session DHS and SHS were within a few points, and the match see-sawed the rest of the day until the 285 finals.

Nick Grujanac (28-11) Sr. SHS had to beat Sergio Sosa (28-7) Sr. WHS to clinch the team trophy for his Patriots. It was not in the cards. Sosa edged Grujanac 3-2 in triple overtime, in what was a fitting final battle of the tournament.

The Warriors five champions were:

Sage Heller was excited he and his three brothers were heading to the Barrington sectional as individuals as well as with the team. Besides Sage and Holden, freshman Reece (20-4) placed third at 106. He took down Tommaso Frezza (26-11) Fr. from SHS by a major decision 14-1.

Sage said this about his matches, “In my second match I faced a kid that was 32-3 (John Frauenheim LFHS). He’d split with the Stevenson kid, and I was kinda looking forward to the match (Sage beat him by a fall). In the final I faced a Stevenson kid (N. Nepo) and I know all his friends, and they told me that he was going to beat me. I said there is no chance he is gonna beat me (Sage won by a 9-1 major decision). I’m probably gonna face him again next week.”

On the prospects for all three of the Hellers, Sage said, “I expect us all to be in Champaign.”

A great story was at 120 where Khalil Johnson (29-1) Jr. ZBHS pulled out a close one over Alec Ripotella (26-6) from MHS by decision 3-2 for the championship. Ripotella, a senior, lost on a close call and gave Johnson all he could handle.

“It was a great tournament, and I’m proud of my Coach V (Ernesto Villalobos) and all he’s taught me.” Johnson continued, “I pushed the pace early and stay focused. Ripotella has been killing me forever. This year I am not a kid anymore. I thought ‘you can’t bully me anymore’.” On his fondness for his head coach, “Coach V keeps pushing me to the next level. He’s like a father to me. He treats me like a man.”

Head coach Mark Stewart of MHS was happy with his three wrestlers that were moving on to the Barrington sectional (Ripotella, Olechno and Obispo). “We lost by one point at 120 (Ripotella) on a close call. It was a toss up. We live to die another day. Cesar worked his tail off. He usually wrestles at 220. Now he wins at 195. All three can contend next week.”

The following finished third and are moving on to the Barrington sectional:

Warrior head coach and host for the regional Marc Pechter had nothing but praise for his counterpart from SHS, Shane Cook. The excitement and emotion on exhibit Saturday was palpable.

Pechter said this, ”I thought two well-coached teams fought their hearts out. Each team had young men step-up in a hostile environment under a lot of pressure. I think Stevenson is a great team with great coaches and are humble when in victory and in defeat.

“Stevenson is a quality program. I am also very proud of my team as well. We have fought through much adversity this year and some great kids lost tough challenge matches.”

Pechter concluded, “Many hard decisions had to be made but we were still able to adapt and overcome. Our leaders really stepped up today and that was the difference.”

It was truly a day to remember and congratulations to all who helped make the Deerfield regional something that doesn’t come around very often. Man, it was fun!