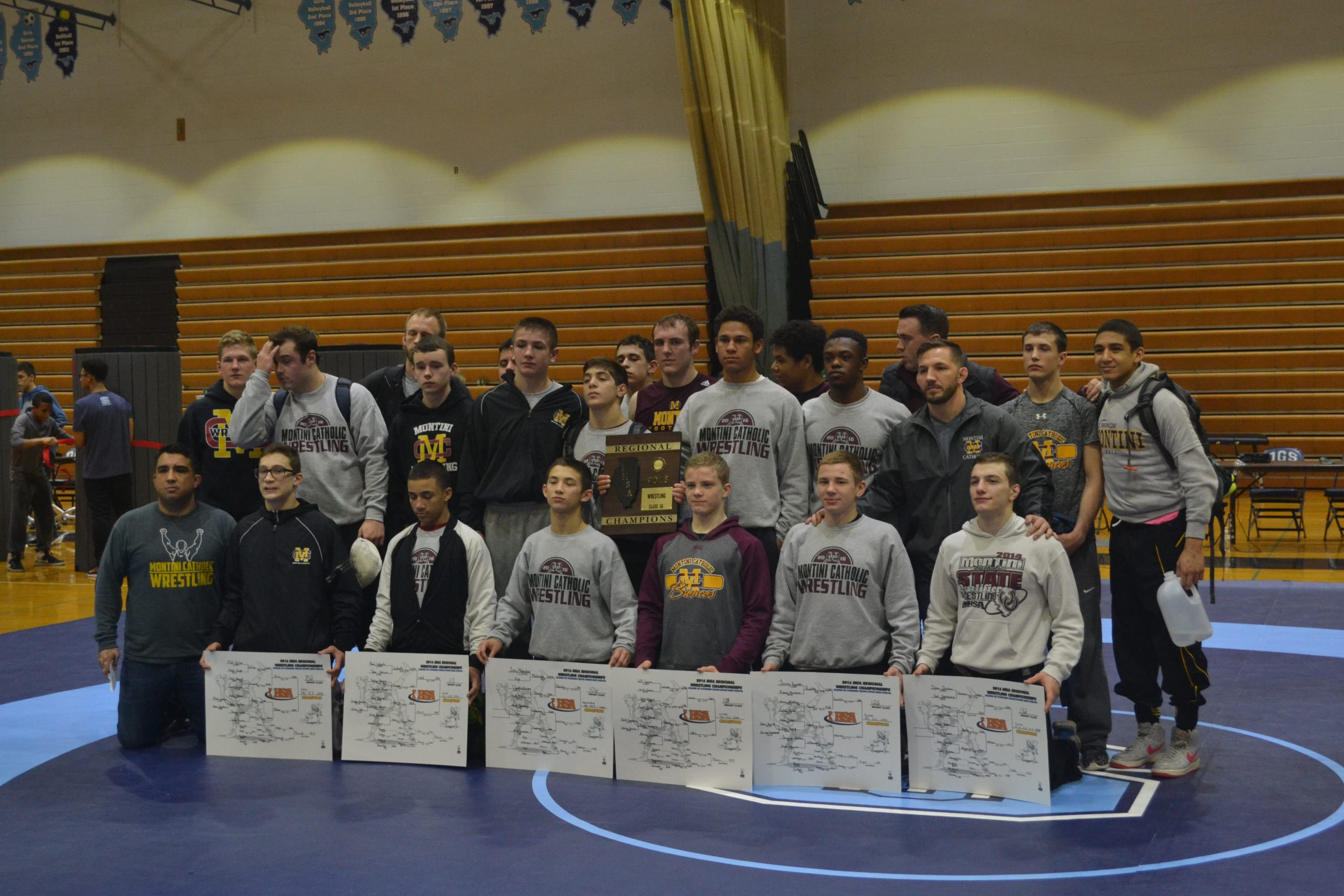 Spectators at the Downers Grove South Regional might’ve been expecting a dog fight between No. 4 Lyons Township and No. 8 Montini Catholic.

But it was the Broncos who blew open the tournament, winning by an impressive 48.5 points over the Lions (168.5) on the strength of six individual champions.

Downers Grove South rounded out the top three with 147.5 points.

Montini powered to the team trophy on Saturday, Feb. 6, with most of its points coming from its lightweight contingent. Winning titles for the Broncos were Joey Melendez at 106 (23-9 over Nate Cummings of Downers Grove South), Real Woods at 113 (injury default), Jimmy Pawelski at 126 (14-4 over Zach Villarreal of Lyons), Dylan Duncan at 132 (19-4 over Tyler Zeman of Lyons), Will Lewan at 138 (fall over Mac Casella of Lyons) and Matt Ortiz at 152 (19-7 over Austin Maher of Downers Grove North).

Montini coach Israel Martinez expected his stars to do well – five of his champions are state-ranked – but it was the underclassmen who fueled the championship run, including Ortiz, a freshman.

“It was a great day for the boys,” Martinez said. “Our freshmen did unbelievably well. … Our 20-pounder (Nicky Amato) ended up making it out, our 60-pounder (Peter Christensen) ended up making it, our 52 ended up winning it, our 70-pounder (Anthony Geraci) ended up getting fourth. So I think that those were key points in this day, along with our heavyweight John Embrey who made his debut today.”

Embrey wrestled his only varsity matches of the year at the regional, finishing fourth with a 2-2 record. The senior, the Chicago Catholic League Player of the Year for the Broncos’ state champion football team, has committed to playing at the University of Central Missouri. Even though he didn’t qualify for the sectional, the points he and his non-qualifying teammates scored in the consolations helped cushion their lead over Lyons.

“If it was going to be close, we made sure we tried to do everything in our power to get those extra half points, pin points, advancement points,” Martinez said. “That’s where we made up the big difference – continuing to push, and our freshmen did well.

“[The margin of victory is] surprising. Lyons had a couple tough bouts there. They came up short today. Griff Powell, Coach (Mark) King, they do such a phenomenal job. We thought we were down by 10 points coming into the day.”

Lyons was led by ninth-ranked 220-pounder Frank Walsh (31-8) and second-ranked 160-pounder Johnny Mologousis (36-2). The latter dominated Peter Christensen of Montini in the finals, racking up takedown after takedown in a 24-9 technical fall.

Lyons narrowly missed out on double-digit qualifiers, as Anthony Vecchio (195) and Howard Willis (145) placed fourth. Gabe Mata (3rd at heavyweight) was the only Lyons qualifier to make it through the consolation bracket.

“We had some things that didn’t go our way, but I gotta give it to Montini – they outwrestled us,” Lyons coach Griff Powell said. “They won a lot of close matches, a lot of big matches. I was impressed with the way they wrestled. I don’t think we wrestled really that bad. We qualified eight guys, put seven guys in the finals. It just wasn’t enough team-wise.”

Powell praised Mologousis and Walsh for wrestling solid all day, but also pointed to 138-pounder Mac Casella’s semifinal victory as another highlight. Casella was down 6-0 to Riverside-Brookfield’s Julian Blanco, who took fourth at state at 126 last year, and ultimately pinned him in the second period to make the regional finals.

“I’m proud of their effort,” Powell said. “Now it’s just individual focus – get as many guys (as we can) downstate and on the medal stand.”

Winning titles in front of their hometown crowd were Downers Grove South’s Tyree Johnson at 145 and Sergio Villalobos at 195.

The third-ranked Johnson used an underhook and outside shots to dictate the pace against Montini’s Caleb Fortuna in a 12-3 major decision. Despite missing more than a month of the season due to a collarbone injury sustained during football, Johnson showed no signs of rust, hitting a slick duck-under and a low level outside single in his victory.

“It’s a great comeback to win a championship,” Johnson said. “Today I felt pretty good, in shape. I knew what I was going to do so I just went out there and wrestled my match.

“I just didn’t want to give him any hope of thinking he could beat me.”

Downers Grove South coach Sean Lovelace was pleased with his team’s seven qualifiers, but said it hurt to see two of his grapplers fall in the third-place match, including senior Calum Bonds, who fell 3-2 to Glenbard East’s Drew Fugiel. The future looks good, however, especially with the sophomore Villalobos, the team’s pin leader this year and last.

“Sergio, he’s an aggressive kid, he’s good on his offense, and he’s kind of funky,” Lovelace said. “He’s not easy to score on either, and he’s a pinner. … By the time it’s all said and done, he’s going to have all sorts of accolades.”

Willowbrook left the regional with a pair of champions with identical 45-1 records – No. 1 Matt Rowland at 170 and second-ranked Jack Jessen at 182.

Leading 2-1 in the finals, Rowland got in on a single leg against Ramarro Lamar (33-7) of Downers Grove South. Lamar attempted a broomstick-type counter, but Rowland dropped his hips and locked up an inside cradle for the fall in 36 seconds. The pin was his fastest of the tournament – Rowland decked his way to the finals with falls in 37 and 97 seconds.

Not to be outdone, his teammate Jessen followed soon after with several powerful upper-body throws in his 17-5 major decision over Ezra Avery of Lyons (32-8). In his two contested matches Saturday, Jessen scored 43 points.

Lone champions for their teams were Hinsdale Central’s Matt Allen at heavyweight and Glenbard East’s Nolan Vincent at 120.

Vincent (32-4) secured two takedowns on Lyons’ Elias Garcia before unleashing a headlock for the fall in 1:48. His appearance was his first at any regional competition since fifth grade, he said.

“I was just thinking ‘Squeeze man, just squeeze. I gotta finish this matchup,’” the senior said afterward. “Before my match my coach told me he hasn’t had a 120-pound regional champ in a long time. So I promised him I’d change that for him.” 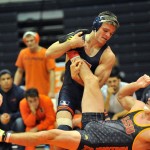