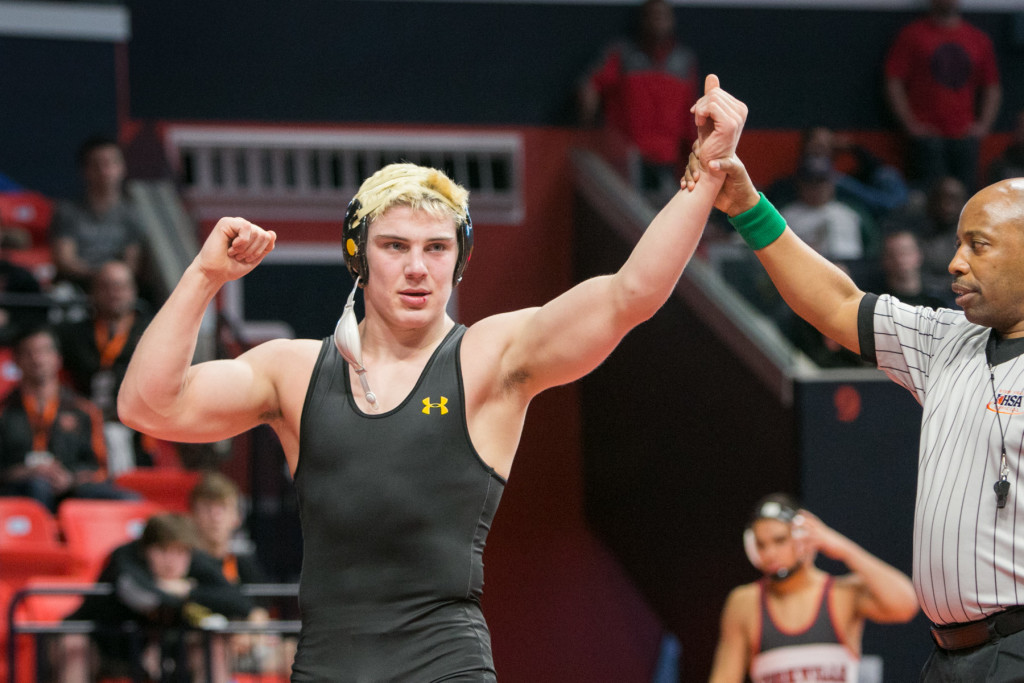 The two biggest sectional upsets will both get a rematch Saturday.

This time, however, something much bigger is on the line – a state title.

Now both will look to make history with revenge on their minds as each will have a sectional final rematch in the state title match.

“If I win, it’d definitely feel better than the first one,” said Assad, who’s ranked No. 2 in the nation by InterMat. “That’s not normally how it is – the first one is usually the best one – but I definitely want revenge, for sure.”

Assad, a University of Iowa recruit who’s looking for a second straight state title, lost in the sectional to Maine South senior Jon Halvorsen in the Class 3A 182-pound state title match. It’ll be a No. 1 vs. No. 2 showdown, according to the Illinois Matmen rankings.

“At first, it was kind of surreal,” Assad said of the sectional defeat. “I thought some calls didn’t go my way, but I can’t change that now. I watched the match a couple of times and realized there are some things that I need to change. I’ve had to adjust my wrestling the last week.”

Johnson, looking for his third straight Class 1A state title, lost to West Carroll sophomore Ethen Doty in the 1A Byron Sectional final. Both won in Friday night’s semifinal to set up the highly-anticipated No. 1 vs. No. 2 rematch.

“Some of those losses you just have to take with some dirt on you and learn from it,” Johnson said. “I wasn’t wrestling my best match, but I was able to get back into the room and focus on where I need to improve so that, if I did get that rematch, that I’d be ready.”

A handful of state champions looking for their second title fell Friday.

In 2A, all six wrestlers going for a second state title won, while Urbana 285-pound senior and University of Illinois recruit Luke Luffman prevailed in his quest to win his third state title.

In 1A, five of the six wrestlers going for a second state title won Friday, while Lena-Winslow/Stockton 285-pound senior Ian Kuehl lost in an ultimate tiebreaker.

Marmion 145-pound senior Trevor Chumbley will have to beat a familiar face Saturday if he’s going to repeat as a state champion: Montini junior Fidel Mayora.

For the ninth time in the last two seasons, the two will meet.

“It’s not really for me (a big deal to see the same person over and over), but other people around us mention it a lot,” Chumbley said of facing the same opponent so much. “It seems to be what everybody asks me about coming into a big tournament.”

Chumbley, who defeated Mayora in last year’s 3A 138-pound state title, has won all of this year’s matchups.

“It’s been tough and something hard to swallow,” Mayora said. “But it’s a big motivator – one of my biggest motivators this year. I think the third time is the charm.”

Marmion also has three kids going for a state title in 3A, while Lockport has two.

In 2A, Woodstock Marian, Crystal Lake South, Oak Forest and Coal City all have multiple kids for a title, while in 1A Tolono Unity, Althoff and Prairie Central all have multiple wrestlers going for a state title.