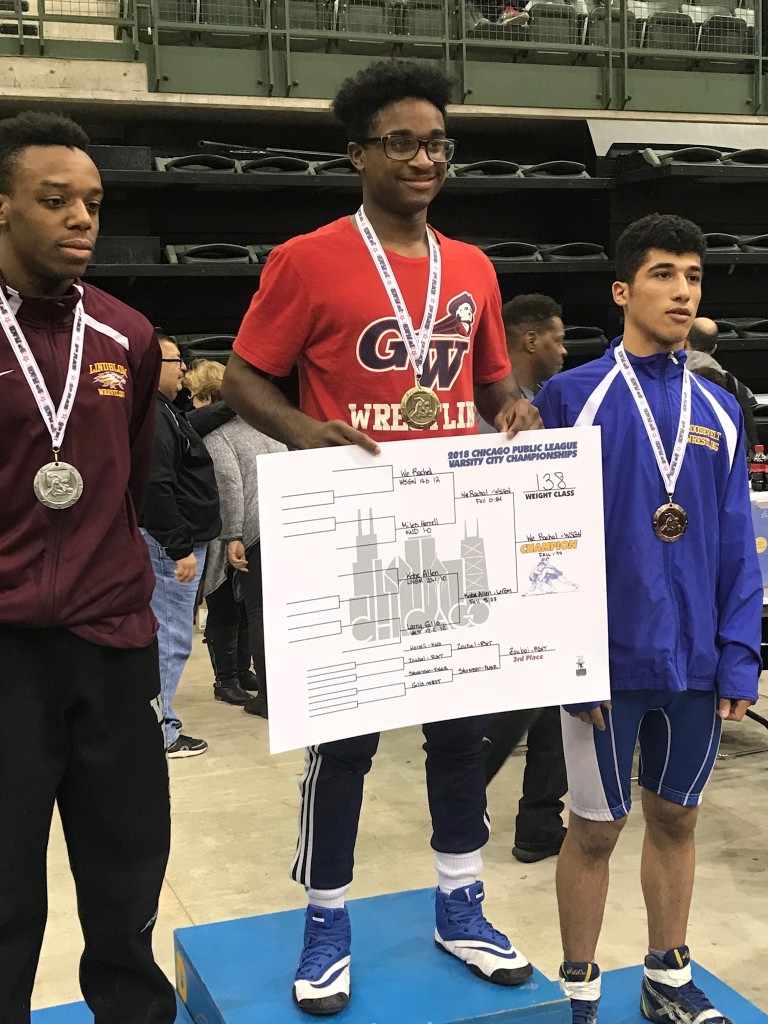 Records aren’t just made to be broken, We Rachal figures.

They’re also made to be ignored.

You might think the two-time state champ from Chicago Washington is having his worst high school season if you just look at his won-lost totals.

Rachal is 21-5 this season after rolling to his third Public League title Sunday at Chicago State University with a 1:44 pin of Lindblom’s Kobe Allen in the 138-pound final. By contrast, Rachal was 92-5 in his first three high school seasons.

But as he bids to become the first Public League wrestler to capture three state championships, Rachal has followed a more difficult path.

Hence, the senior’s belief that he’s at the top of his game.

“I think I’m way better (than last year) because I’ve (faced) a lot more competition, such as the Ironman and Dvorak (tournaments),” Rachal said. “I’m a lot more technical, my cardio is way better.”

Competing against some of the best wrestlers in the country has helped Rachal mentally too.

“It was a big wakeup call, you could say,” he said. “It was a learning experience.

Rachal already is one of just seven Public Leaguers to win two state titles. If he makes history by winning a third, he hopes it will have other city kids chasing big dreams of their own.

In fact, there’s someone who lives under the same roof with that mindset: Rachal’s twin brother Baan.

Injuries to and surgery on both shoulders robbed Baan Rachal of his postseason as a sophomore before he took sixth in Class 2A at 138 last season. This year, he has bulked up to 152 in a bid to join his brother at the top of the state podium.

“After (injuring) my shoulders, I felt I needed to put more work in,” Baan Rachal said. “I lifted, got bigger. … I worked on cardio and got better.”

Now he turns his sights to the state series.

“I would see We win state year after year and I knew I should have been there with him,” Baan Rachal said.

Another Public Leaguer with state-meet aspirations is Bronzeville senior Shawn Sparacino (24-0), who beat two-time city champ Brendan Gallo of Taft 11-6 in overtime for the 132 title.

“To go out there and beat someone like Brendan Gallo, it shows my hard work’s paying off.”

Joining We Rachal as a three-time city champ was Bowen senior Cameron White (33-4), who pinned Taft’s Max Garland at 1:53 in the 160 final.