EVANSTON, Ill. – Isaiah Martinez, Zane Richards and Zac Brunson each advanced to the semifinal round of the 54th Ken Kraft Midlands tournament on Thursday evening with quarterfinal victories. Redshirt sophomore Emery Parker dropped his quarterfinal bout against No. 1 seed T.J. Dudley, and will compete in the consolation bracket Friday afternoon. Session III of the tournament begins tomorrow (12/30) at 12 p.m. central time. The championship bouts will be broadcast live on Big Ten Network Friday evening at 7 p.m.

Isaiah Martinez showed his dominance at 165 pounds on day one of Midlands, racking up four straight bonus-point victories, including his fourth pin of the season, to advance to tomorrow’s semifinal round. In the evening session, Martinez won his quarterfinal bout by a 14-5 major decision over unattached Iowa freshman Alex Marinelli. The four-time Ohio state champion pushed Martinez for much of the first period, but, with under 10 seconds left, Martinez got Marinelli on his back and picked up him up and took him back down to the mat for a last second takedown. From there, Martinez dominated the match, rolling off five points in each of the final two periods to win the match. Martinez will wrestle Arizona State’s No. 4 seed Anthony Valencia in the semifinals.

The top-seed at 133 pounds, Zane Richards punched his ticket to tomorrow’s semifinal round by grinding out a 6-3 decision over No. 9 seed Bryan Lantry of Buffalo. Richards got to his offense early with two takedowns in the opening period. Although Lantry would deny him another takedown for the remaining four minutes, Richards kept the Buffalo grappler at bay to advance in the championship bracket. Richards will be pitted against No. 12 Jamal Morris (NC State) tomorrow afternoon.

Earlier today, Richards moved into Illinois’ career wins list with his 91st and 92nd career victories in session one. Richards tied Tony Dallago, Kirk Azinger and Seth Brady for 25th place all-time with a 26-8 technical fall of Michigan’s Ben Lamantia., and then passed the trio of former Illini with another dominating technical fall in round two. Richards (11-0) will wrestle No. 12 seed Jamal Morris (NC State) in the semifinals tomorrow afternoon.

After dominating his first two opponents with first-period pins today, Brunson’s quarterfinal match proved tougher as No. 4 seed David Kocer (South Dakota State) battled for a full seven minutes. After a scoreless first three minutes, the Illini senior earned an escape point to grab an early lead. After Kocer grabbed the lead with a reversal to start period three, Brunson escaped, and then notched the winning takedown off a kickstand with 45 seconds remaining. The victory marked the 90th of Brunson’s career. Tomorrow afternoon, Brunson will look to pull the upset of top-seed Zahid Valencia (Arizona State) in his semifinal match.

Zac Brunson (15-2) pinned his way into the quarterfinal round, racking up his team-leading fourth and fifth pins of the season. The 174-pounder began the day with a first period fall of Braxton Cody (Northwestern) in 2:38, and then followed it up with a 2:37 pin of Ohio’s Arsen Arshughyan. Top-seed Zahid Valencia of Arizona State awaits Brunson tomorrow in the semifinals.

After an impressive showing during the morning session, Parker ran into 2016 NCAA runner-up, and No. 1 overall seed, T.J. Dudley of Nebraska. Dudley grabbed control of the match from the whistle and cruised to a 14-1 major decision over the Illini redshirt sophomore. Falling to 16-2 on the season, Parker will look to bounce back tomorrow in wrestle backs with sights set on Friday night’s third-place match.

In session one, Parker cruised to an opening round major decision of Princeton’s Kevin Parker, and then won in dramatic fashion over No. 13 seed Jordan Ellingwood (Central Michigan) to advance to the quarterfinals. With the match knotted at 2-2 in the final period and Ellingwood riding, Parker muscled a reversal and then forged it into a pin of the Chippewa grappler with 1:23 left on the clock. The pin was Parker’s third of the season and the 11th bonus-point victory this season.

The Fighting Illini went 0 for 4 in the consolation round during session two. Travis Piotrowski (125), Eric Barone (149) Kyle Langenderfer (157) and Brooks Black (HWT) each dropped their consolation matches by decision.

Despite dropping his last two matches of the day, Piotrowski notched his first win over a ranked opponent with a second round upset of No. 6 seed T.J. Bentley (Pittsburgh).

Isaiah Martinez, Zane Richards and Zac Brunson each advanced to the semifinal round for the second time in their careers. Martinez won the 157-pound title in 2014, while Richards (133) and Brunson (174) both finished runner-up.
Isaiah Martinez officially qualified for Illinois’ all-time win percentage record, overtaking Matt Lackey (0.896) with his record of 76-1 (.987). Lackey tallied 120 wins in 134 matches for a 0.896 win-percentage from 2000-03. Zane Richards (93-20) sits in 9th place on the all-time win-percentage list with a .823 mark.
Redshirt senior Zane Richards entered the school’s top-25 wins list in his first match of the 54th Midlands. His 26-8 tech fall over Ben Lamantia was the 91st of his career, tying Tony Dallago, Kirk Azinger and Seth Brady. Richards passed the trio of former Illini with a 21-5 tech fall of Jacob Colon in round three.
Brunson registered his 90th career win with a 4-3 decision over #18 David Kocer (South Dakota State) in the quarterfinal round
Zane Richards (10-0) and Isaiah Martinez (9-0) remain as Illinois’ lone undefeated wrestlers
Emery Parker (184 pounds) has scored bonus points in 11 of his 16 victories this season, while Isaiah Martinez has done so in 9 of his 10 victories.
Zac Brunson earned two pins in session I to move into the team lead with five pins this season
Isaiah Martinez, Zane Richards and Zac Brunson advanced to their second career quarterfinal appearance at Midlands. Martinez won the 2014 title at 157 pounds, while Richards and Brunson placed runner-up.
True freshman Travis Piotrowski earned his first win over a ranked opponent with an upset of #18 LJ Bentley

Round 1: Bye
Round 2: Lost by major decision against Nate Rose (Buffalo), 16-2
Cons. Round 2: Bye
Cons. Round 3: Lost by sudden victory against Johnathen Dennis (Grand View), 4-3
Andre Lee is eliminated

Round 1: Bye
Round 2: Won by decision over Steven Holloway (Iowa), 2-0
Round 3: Lost by decision against (13) Jordan Wood (Lehigh), 2-1
Cons. Round 4: Lost in sudden victory against Gage Hutchison (Eastern Michigan), 3-1
Brooks Black is eliminated

Round 1: Lost by decision against Zak Parker (Ohio), 7-3
Cons. Round 1: Bye
Cons. Round 2: Lost by fall against David Henry (Oregon State), 4:41
Deuce Rachal is eliminated 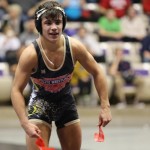 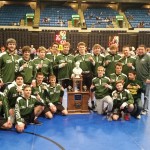