Garrette Branson, Sr, Mattoon, 220 – Champion and Outstanding Wrestler at the Civic Memorial Holiday Tournament with all pins. Led Mattoon to the team tournament title.
Dylan Butts, Sr, Fenton, 182 – Champion and Outstanding Wrestler at the Weiss Invite at Fenton with 3 falls. Improved overall record to 6-0 with 6 falls.
Blah Dahnweih, Jr, DeKalb, 195 – Went 4-0 on the week with wins over Nick Stemmet of Yorkville 6-2 (avenged his loss to Stemmet from the Barrington tournament) and #5 power ranked Cody Goodman of Deerfield 7-4.
Connor Gaynor, Fr, Mt Carmel, 126 – Making his mark at the high school level with a 5-3 sudden victory win over Dylan Burnoski (Montini), a 2x state qualifier and #3 in our power rankings.
Matthew Hennessey, Sr, Plainfield North, 220 – Went 5-0 over the weekend with a win over #4 power ranked Josh Carter from Harlem 8-2. Matthew is now 12-0 and only one of his matches this season has made it past the 1st period.
Jacob Rundell, So, OPRF, 106 – Beat Matt Ramos (Lockport), ranked #5 in the 113-pound power ranks, in OT at the Washington Super Duals.
Jake Stiles, Jr, Montini, 145 – Two huge wins this week including a 5-2 decision over Dominick Ambrose (Providence), a 2x state qualifier, and a 1-0 decision over Kendall Coleman (Mt Carmel), a state finalist and #1 in our power rankings. 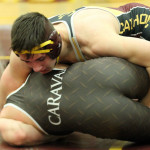