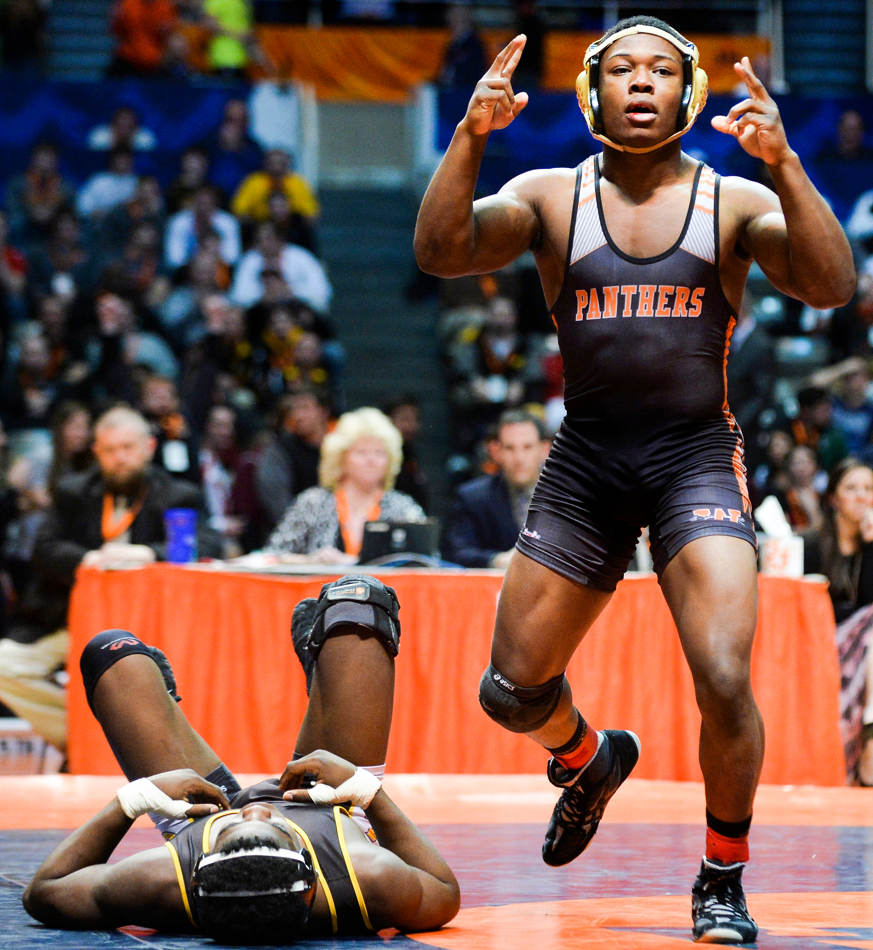 Rudy Yates has been here before.

A two-time state champion, the 132-pound senior on the Sandburg wrestling team enters this weekend’s IHSA State Tournament as the No. 1-ranked wrestler at his weight, according to Illinois Matmen’s GO EARN IT Wrestling Apparel Class 3A rankings.

It’s the third time in four years Yates has carried the distinction to Champaign.

“I see it as a sign of respect,” said Yates, a two-time state champion. “It’s pretty cool and something I’ve been working for my whole life, and seeing my name up there is something I’m very proud of.”

The ranking, however, also brings a lot of expectations.

Yates is one of 42 wrestlers who enter the state tournament as No. 1-ranked, and with it comes the pressure of trying to uphold the distinction.

For some, it’s a welcomed challenge, but for others it can be a pressure-filled, added distraction.

“It was cool being No. 1, but there was always a target on your back,” said La Salle-Peru alumnus Brad Gapinski, who was the No. 1-ranked 140-pound wrestler entering the 2009 state tournament. “Everyone always knew who you were and, just like anything, everyone was gunning for you.”

Being No. 1 can become an issue if you let it.

“I don’t really feel the pressure to uphold the ranking,” said Washington’s 170-pound senior Randy Meneweather, a two-time state champion who is ranked No. 1 for the second straight season. “Instead, I just try to stay calm, focus, joke around and be loose.”

Some No. 1-ranked wrestlers have found that staying naïve to the rankings is the best way to go as they purposely don’t look and see where they and others are ranked.

“I’ll look if I have some free time, but I usually don’t look too often,” Meneweather said. “I always know that if I wrestle my match and my style there aren’t too many people who can hang with me.”

However, staying away from the rankings isn’t always possible because others will keep wrestlers informed.

Others, however, want to know where they are ranked, especially heading to state.

“I think sometimes it may be better if I didn’t check the rankings, but I do check,” Yates said. “I’m always seeing where I’m at and where other kids are at.”

Regardless, No. 1-ranked wrestlers do carry the target on their back and opponents oftentimes want to prove something against them.

“Everyone always wanted to dethrone you,” Gapinski said. “I feel like a lot of times guys would stall and do whatever they could to beat me.”

With a state title on the line this weekend, the target on the backs of No. 1-ranked wrestlers will be even bigger.

“I feel like I get other people’s best and they try to keep it close,” Meneweather said. “But I like it when people come out, try to wrestle and try to dethrone me. I’m a big fan of that and don’t mind the target at all.”

While Gapinski, Meneweather and Yates all have faced the obstacle of entering the state tournament as No. 1-ranked, all three are grateful to have had the opportunity, and Yates and Meneweather are excited to once again have the chance to uphold their No. 1-ranking with a state title.

“When you win state and feel that emotion, it’s amazing,” Yates said. “It’s pretty crazy to know that all the extra practices, extra sprints and work that you’ve done has finally paid off.”