HOFFMAN ESTATES, Ill. – Fighting Illini redshirt junior Emery Parker won the 55th Ken Kraft Midlands 184-pound championship with an 8-2 victory over top-seeded Nate Jackson (Unattached Princeton) on Saturday night at the Sears Centre. Going 5-0 on the weekend to win the 13th Midlands title in program history, Parker improves to 11-1 on the season. Also placing on Saturday night was Dylan Duncan in fifth at 133 pounds, while the Orange and Blue finished 10th as a team.

“He looked good, and he beat a guy who beat him a couple times before,” said head coach Jim Heffernan. “He can still open up and score a lot of points, and is just scratching the surface.”

Joining Isaiah Martinez’s titles in 2014 and 2016, Parker gives Illinois it’s third individual champion at the annual holiday tournament in the last four seasons. Martinez won the 157-pound title in 2014 and the 165-pound crown in 2016. Parker’s title makes him the 11th Illini champion at the event and the third for an Illini 184-pounder. John Dergo (2009) and Pete Friedl (2005) were Illinois’ previous champions at 184 pounds.

“It’s definitely something special, but those are the kind of things you enjoy when it’s over,” said Parker of joining the previous 12 champions. “In the moment, it’s a ‘why not me’ mentality. There’s no reason I should be losing out there. I train every day for this and I think winning is what is supposed to happen.”

After wrestling Nate Jackson three times last year while the two-time All-American was at Indiana, Parker avenged his three close loses to the now unattached Princeton wrestler from last season. After the two grapplers traded shots in the first two minutes, Parker broke through off of a scramble near the boundary to draw first blood late in the opening period. Leading 2-1 to begin the first, Parker worked an escape and then used a back-slide takedown to extend his lead to 5-1. Staying aggressive in the final frame, Parker again gained control of Jackson for his third, and final, two-pointer for the 8-2 decision.

“It’s one of those things, fool me once, shame on you, fool me twice shame on me,” said Parker about learning from facing Jackson three times last season. “He goes for the same shots every time, and you have to learn sooner or later. I’ve been closing the gap every time that I’ve wrestled him, including taking the lead in my first match against him. Then, at nationals I took him into overtime. Tonight, you saw the difference. I paced myself, took my shots when I saw him open and took my points.”

The Wadsworth, Illinois native reached the final by going 4-0 across the first three sessions of the tournament, outscoring his four opponents 33-15. In his semifinal victory, Parker defeated ninth-ranked Nick Gravina of Rutgers by a score of 2-1. Parker’s decisive point came after an injury timeout by Gravina in the third period that gave Parker the option of start position. Parker chose down, and then worked the bout-winning escape. The win over Gravina was Parker’s first over a top-10 opponent this season.

At 133 pounds, redshirt freshman Dylan Duncan bounced back after two losses on Saturday afternoon with a 6-2 victory over Northwestern’s Colin Valdiviez in the fifth-place match. Duncan went ahead 2-0 on a first-period takedown, and then added a second takedown in the second period plus riding time. Finishing 4-2 on the weekend, Duncan improved upon his 2-2 record at last year’s Midlands when he wrestled unattached as a true freshman. 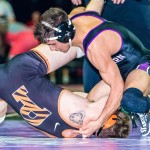