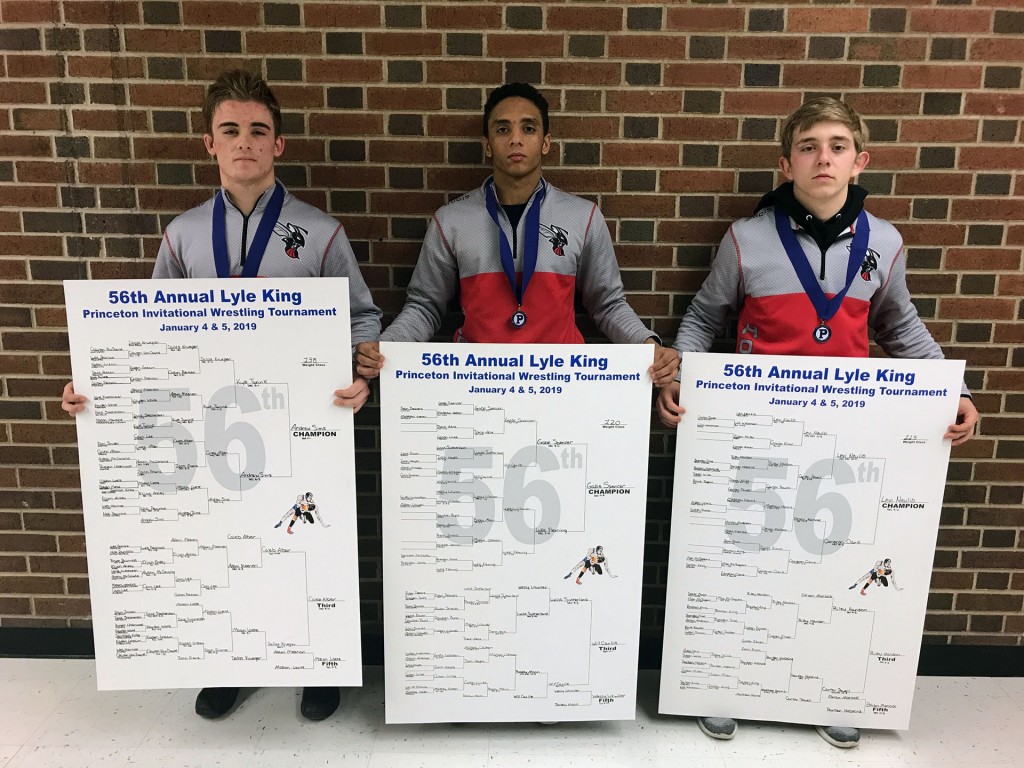 Levi Neuleib had to be honest.

When asked pound-for-pound if he, 120-pound junior teammate Gabe Spencer or 138-pound senior teammate Andrew Sims was the best wrestler of the three, Neuleib – a 113-pound junior at Heyworth – didn’t hesitate.

“Gabe and Andrew always beat my butt,” Neuleib admitted. “They always put a pounding on me, but Gabe and Andrew’s matches are always like 2-1, 3-2 or sudden victory. They are a different breed than I am, so it’s a flip of the coin between them who’s the best.

While there may be some unsettled debate on who’s the best, there’s one thing that’s not up for debate – all three are among the best Class 1A wrestlers in the state as each is ranked in the top 2 at their weight in the current GO EARN IT Illinois Matmen rankings.

“This is really the first year in the program where we can beat and bang with some of the better teams in the state,” Sims said. “We still have farther to go as a program, but so far the season has gone well.”

The three championships were the most one school has had at one PIT since 2016.

Not bad for a program that has only existed for eight years.

“This year, we really want to prove to everyone that Heyworth can succeed,” Neuleib said. “The (Heart of Illinois Conference) is a tough conference in almost every sport and we kind of get bullied in other sports, but wrestling is where we really take off.”

All three are hoping and intending to celebrate another trio of titles on Feb. 16 as they all want to win a state title together.

All three have learned that the hard way with state tournament heartbreak.

Spencer – who’s 26-0 this season – was the first as two years ago as a freshman he lost in the 1A 113-pound state title match. Last year, he qualified for state but didn’t place.

“(Taking second) was a product of wrestling hard and not paying attention to the rankings,” Spencer said. “I had to wrestle hard, stay focus and listen to my coaches.

“(Not placing last year) happens sometimes, but you have to wrestle through adversity and just stay tough. I got mentally weak and lost, and you can’t do that at state. Win or lose, you have to keep on wrestling.”

After he finished sixth at 106 pounds as a freshman, he lost in last year’s 1A 113-pound state title match.

“Being in the finals is such a surreal experience,” Neuleib said. “I was kind of star-struck at first. I dreamed and dreamed and dreamed about it and then you lose… I cried in the back hallway for like 10 minutes. I got back up, got my medal and afterward I saw my athletic director – who was in his last year – and I broke down again. I just had to get off that floor.”

A three-time state qualifier, Sims – a trio-best 28-0 this season – is looking to break through and claim his first state medal.

“It’s always been the dream to win a state title, but I just haven’t gotten that dream yet,” Sims said. “Even to place would be great. (Gabe and Levi) were the ones who showed me that that goal was reachable. I just feel like something clicked this year and something just feels different.”

If any – or all three – were to win a state title next month, it’d be the first state title in program history.

“If we all win, it’d probably be the best day of my life,” Neuleib said. “I’d probably tell my great-grandkids about it over and over – really.”

In the meantime, they just want to continue to build the name of Heyworth wrestling and figure out which of the three is the best pound-for-pound.

“It’s hard to say because you wrestle each other every single day and you start to learn each other’s styles,” Spencer said. “Drew and I go at it, and it’s because we wrestle each other so much that we are forced to figure out new moves and try new things. We wouldn’t have it any other way though.”