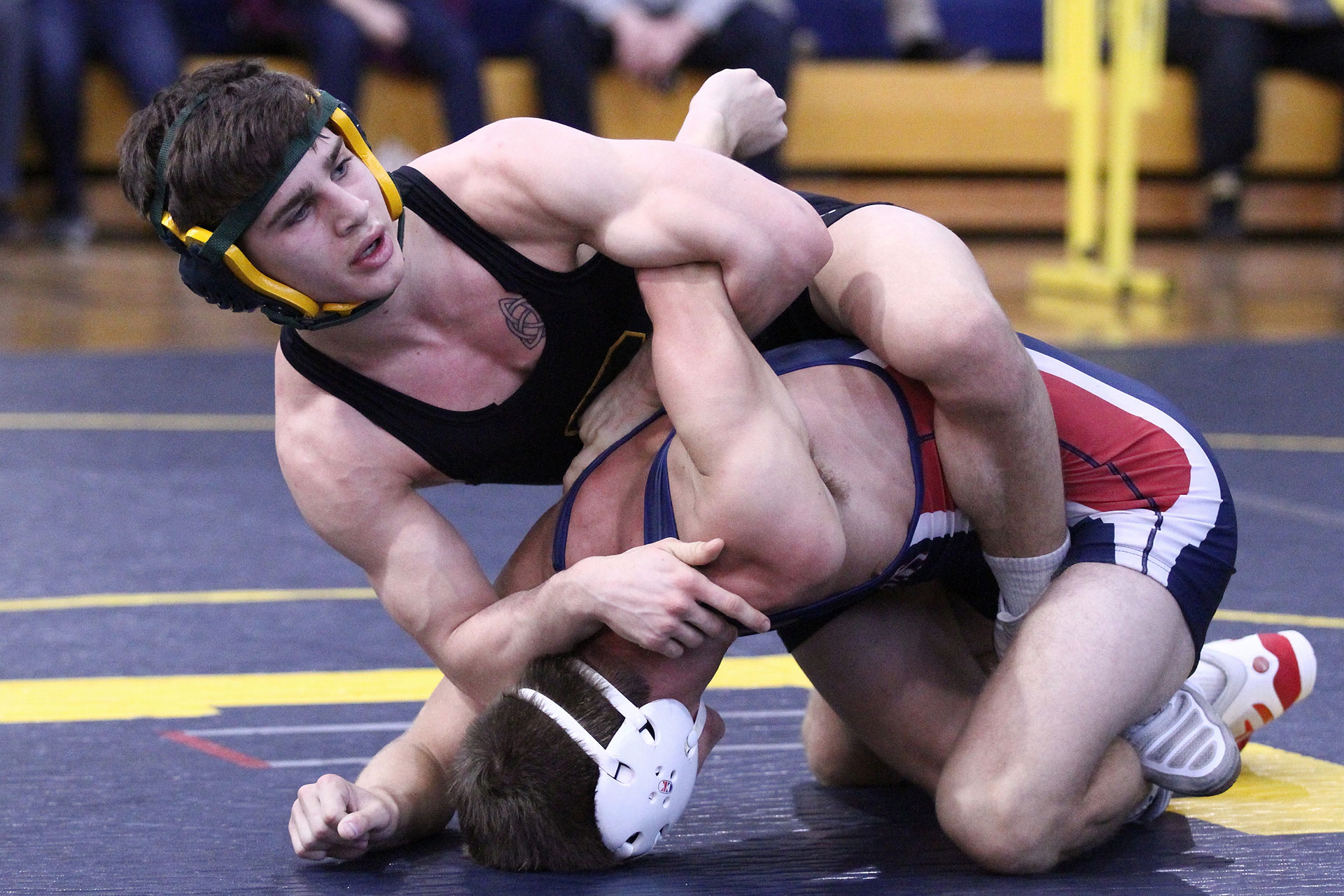 Despite finding himself holding an outstanding wrestler award and sporting an unbeaten season’s record on Saturday, Burlington’s Nick Termini stayed true to the universal trait of all the best wrestlers and the fuel that feeds the fire.

“I’m happy but not near satisfied,” Termini said after winning a 9-5 title-mat decision at 145 over Jacobs’ John Ridle, at this year’s 13-team Randy Conrad Invite at Leyden.

For individual wrestlers, hunger like Termini’s will rise through January and peak when February’s postseason begins. On the team level, Stevenson proved just a little hungrier than Conant on Saturday at Leyden.

Stevenson earned a 209-196 edge over Conant to take the team title, with Jacobs (184) placing third and Leyden (162) rounding out the top four teams.

“We understand that winning tournaments is a challenging thing to do, especially against quality competition and some really good wrestlers,” Stevenson coach Shane Cook said. “So we’re proud of our guys, to come in here and win a dogfight with Conant. It’s definitely a special moment in the season.”

Stevenson freshman Cole Rhemrev (22-6) got his team rolling on the title mat at 106 pounds, against Harvard’s Bryce Fiegel (28-3). Rhemrev led 4-1 after a period and went up 8-2 with a takedown at the end of the second period, en route to a 12-4 major decision win.

“Cole had some high-level kids and (Fiegel) is a top-ranked kid in 2A,” Cook said. “So for Cole to come out and get a major was a big win for him, and for us.”

Fiegel is currently ranked No. 3 in 2A by Illinois Matmen.

Frezza, Matmen’s fifth-ranked wrestler at 120, stayed in control throughout a 6-0 victory. A scoreless first period saw Frezza escape to start the second and earn a takedown to lead 3-0 heading into the third. Giuliano chose down position and Frezza rode and then turned him for the eventual 6-0 decision win.

Frezza placed sixth in Illinois at 120 in 3A last year and Giuliano was a state qualifier at that weight.

“(Giuliano) is a good wrestler,” Frezza said. “At the beginning I wasn’t really getting to my shots and I just had to realize that even if my shots weren’t hitting, I had plenty of other things to go to.

“I’m pretty happy with where I’m at right now and there’s still plenty of time to keep working on things. I’m working on opening my shots because I can’t get to my shot in every match. I think it’s just pulling the trigger because my setups are there. But I feel great at 120 compared to last year.”

Conant’s Dominic Laskero (20-4) posted a trio of pins in winning the title at 126, capped by a second-period fall against Richards’ Adam Alkilani (14-7). That set up a title match at 132 between a pair of once-beaten wrestlers in Jacobs’ Jake Harrier and Leyden’s Daniel Uribe.

“I’m more comfortable on top this year and I just need to continue improving and keep working my shots at all times, from everywhere,” Harrier said. “I just have to believe in it and go.

“My mentality is good this year. It doesn’t matter who I’m wrestling, I’m just going to go out and wrestle, and have fun with it.”

The Cougars’ four individual champions were the most by any team in the field.

At 145, Termini led 2-1 after a period against Ridle and 6-2 after two periods. Ridle (22-6) escaped to start the third and earned a takedown to cut Termini’s lead to 6-5, but an escape and a final takedown gave Termini the 9-5 win.

“Ridle is tall, lanky, and strong as an ox, and that’s something I struggle with,” Termini said. “I have to get better and separate myself.”

With a 28-0 record, defending state champion Termini is the top-ranked wrestler in 2A at 145 pounds. He lost seven matches en route to winning last year’s state crown at 145, so this year’s clean slate has somewhat surprised him.

“I didn’t anticipate this type of season,” Termini said. “I’ve known throughout my wrestling career that you’re going to take losses during the season. I’m sure that will come at some point during the year but to be unbeaten at this point in the season — I’ll take it.”

Last year, Harlem’s Chad Richards placed second at a Class 3A regional but an injury suffered at practice kept him out of the sectional. The year prior, he tore his labrum before the sectional meet.

The junior is hungry to make a healthy run to a downstate berth. Richards (25-1) won by fall in his semifinal before winning by tech fall on the title mat at 160 over Vernon Hills’ Ryan Peck (21-6).

Richards led 2-0 after a period and 5-0 after two periods before picking up steam and finding a higher gear in the third. Richards’ energy seemed to rise as the match went on, and he kept his foot on the gas pedal en route to a 21-3 win.

“At the start of the year I’d say I was pretty sloppy,” Richards said. “I just had to keep training and keep pushing. I still need work in top position but I’m wrestling all right.”

At 170, no one made it into the second period against DeLaSalle senior Ronald Anderson. Anderson pinned Highland Park’s Charlie Lens (17-6) on the title mat at the 1:46 mark

Anderson was partly fueled by a recent 1-0 decision loss to Brother Rice’s Dominick Murphy, who is currently ranked 4th at 170 by Illinois Matmen.

“I was real motivated today,” Anderson said. “Last year I took fourth here and I haven’t been wrestling well lately. Usually, I try to outscore people but today I decided to go after pins.”

Anderson was a state qualifier last year in Class 2A and won 26 matches before losing twice in Champaign. He knows what will be required if he gets downstate again.

“It takes a lot of endurance and a lot of technique,” Anderson said. “This year I’m mentally stronger as a wrestler, I’m using my technique more, and my coaches want me to use my speed a lot more. I’m just trying to perfect it all for state.”

The most dramatic moment in the finals came courtesy of Burlington’s Zach Collins (19-7) at 182 pounds. Collins trailed DeLaSalle’s Dominee Daniels 8-6 in the waning seconds of their title match when he went for broke.

Collins threw Daniels to his back as time expired to win a 9-8 decision.

“I kind of just blanked in the end and just kind of went,” Collins said. “It’s kind of a reflex that you get and once I had him on his back I just prayed a little bit and was like ‘stay down’.”

Stevenson’s Max Gomez (20-6) was intensity personified when he stepped onto the title mat at 195. The senior won by major decision and fall to reach the title mat against Jacob’s Ryan Golnick (21-6), where he won by second-period fall.

Gomez recently picked up the intensity of his warm-up routine and it has made all the difference.

“My coaches and I talked about the best way for me to get ready to compete,” Gomez said. “Mentally I like to think I’m always ready but my body needed to be more loose and flexible and ready to go. So now it’s just about getting my body more ready to go.”

Gomez has also never relied much on cradles, but that’s what he used to great effect at Leyden.

“A cradle was not really in my arsenal — I like a hammer-lock,” Gomez said. “I came off the mat today and my family was like ‘Max, when did you learn how to cradle?’ But I’ve really been working hard on top.”

“Max is a kid who has worked incredibly hard,” Cook said. “He has committed his life to the sport and he wants Champaign and he wants a medal.”

At 220 pounds, Leyden’s Ryan Jaffray (21-3) became the first Leyden champion of the inaugural Randy Conrad Invite — named for Leyden’s long-time athletic director who retired last year, and won a state title at 126 pounds for East Leyden back in 1978.

Jaffray won a 7-3 decision over Lester Gonzales (17-7) of Conant on the title mat. Lakes’ Jack Burnati (22-1) finished a solid day’s work with a second-period pin on the title mat at 285 over Richards’ Ahmad Suleiman (17-2). Burnati won by fall and major decision to reach the title mat.

Stevenson edged Conant largely thanks to success on the consolation mats. The Patriots got thirds from Yoni Leibovitz (126), Alex Scott (170), and Dan Erdenetsogt (220), and fourths from Ivor Gueorguiev (152) and Michael Phelps (182).

Cook likely spoke for all coaches present at tournament’s end.

“We all understand that this is just preparation to get us ready for the state tournament series,” he said. “So we know that in the month of January we still have a lot of room for growth and a lot of room to improve.” 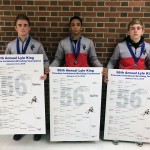