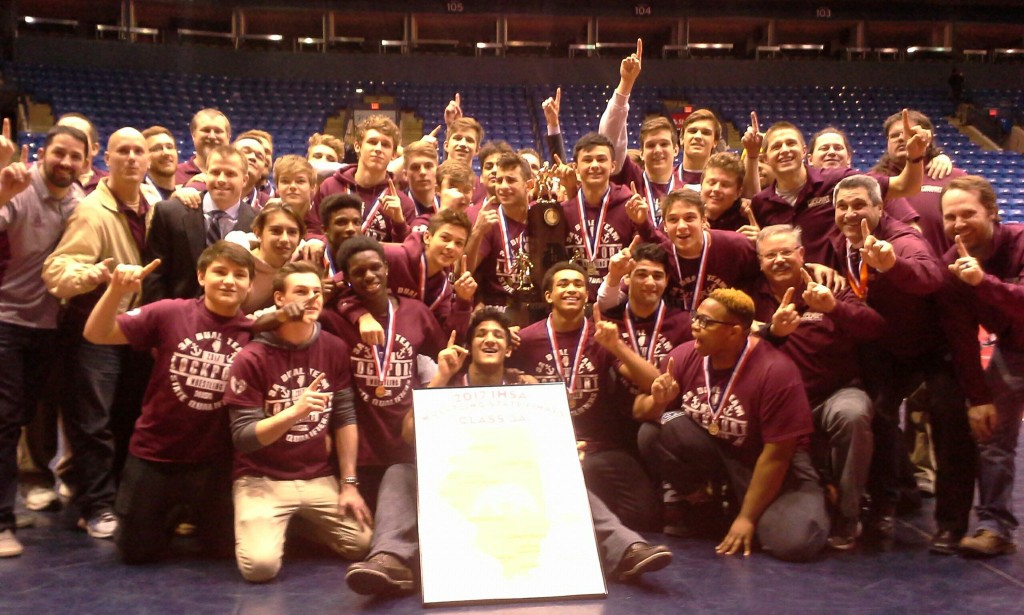 After the Lockport wrestling team beat Montini 33-20 to win the Class 3A state title at the IHSA Dual Team State Tournament in Bloomington, the Lockport coach was lifted off his feet by his team in celebration of the program’s first dual team state title.

“This is special,” Oster said. “This is just a special team and a special year. It was a great day.”

A day that ended as a state champion.

As the No. 1-ranked team in the final Illinois Matmen GO EARN IT Wrestling Apparel rankings, the Porters defied the doubters Saturday to earn a state trophy for the third straight year and also finished off an undefeated dual season.

“A lot of teams didn’t think we had what it took and they were talking crap,” Lockport 126-pounder Brendan Ramsey said. “We showed them and everyone what we can do.”

After Lockport defeated No. 3 Marmion 33-22 in the quarterfinals, the Porters advanced to the final with a 50-9 semifinal win over 3A No. 6 Lincoln-Way West.

Facing 3A No. 5 Montini in the championship, the Broncos scored the dual’s first seven points, but Lockport came roaring back as it finished on a 33-13 surge.

“This feels good,” Lockport 195-pounder Payton Fernandes said. “I didn’t feel like we were officially No. 1 until now.”

Fernandes played a big role in the win as, with the Porters leading 9-7 after five weights, he started a series of pins that gave Lockport full control.

“We knew they are super tough from 106-170, so we knew that we had to make some hay up top,” Oster said. “It’s hard to predict pins in the state finals, so we were counting on major decisions from Peyton, Yousif and Ronald, but when we got pins from all of them, we knew were in the driver’s seat.”

Ramsey’s 14-7 decision at 126 pounds secured the win for Lockport with two matches left.

“This is a really good feeling,” Ramsey said. “We’ve been working all year for this. The last few months, all the hard work we put in was for this. It feels so good to achieve it all.”

While Lockport won the state championship, Montini continued its late-season surge with the second-place showing.

After the Broncos beat No. 4 Mt. Carmel in Tuesday’s sectional, Montini stunned 3A No. 2 and three-time defending 3A dual team state champion Oak Park-River Forest 29-26 in Saturday’s quarterfinals.

The Broncos then defeated Deerfield 41-27 in the semifinals to advance to the title match.

“I don’t think our guys were ready for that big emotional dump after we beat Oak Park,” Montini coach Israel Martinez said. “We started a little flat against Deerfield, but we battled back and did well. I’m proud of my team and I’m proud of our kids.”

In the 3A third-place match, Lincoln-Way West defeated Deerfield 39-15. 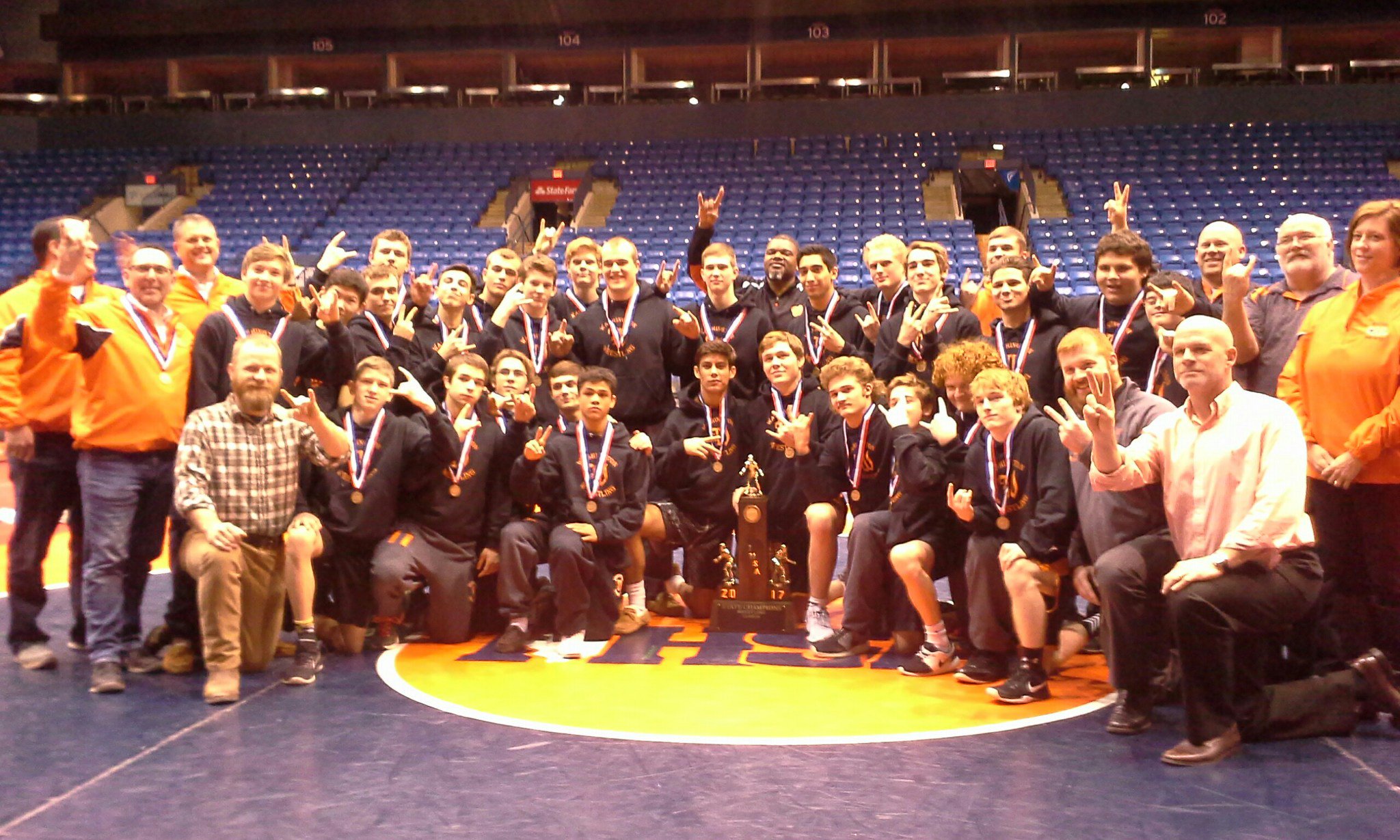 In a No. 1 vs. No. 2 quarterfinal showdown, top-ranked Washington beat Crystal Lake Central 39-28 to advance to the semifinals and then rolled.

“Last year’s team had a lot more big guns,” Washington coach Bryan Medlin. “I think last year we had a lot more upper-echelon kids, but this year we had more working-class kids who really had to fight for it, which makes this special.”

In the title bout, Washington had seven pins and two victories by technical fall.

“This is all about our culture,” Medlin said. “You can’t build a great program on one or two kids. It has to be about the legacy. We are going to lose 10 seniors, but I have no fear about next year because they’ve laid a great foundation and culture for years to come.” 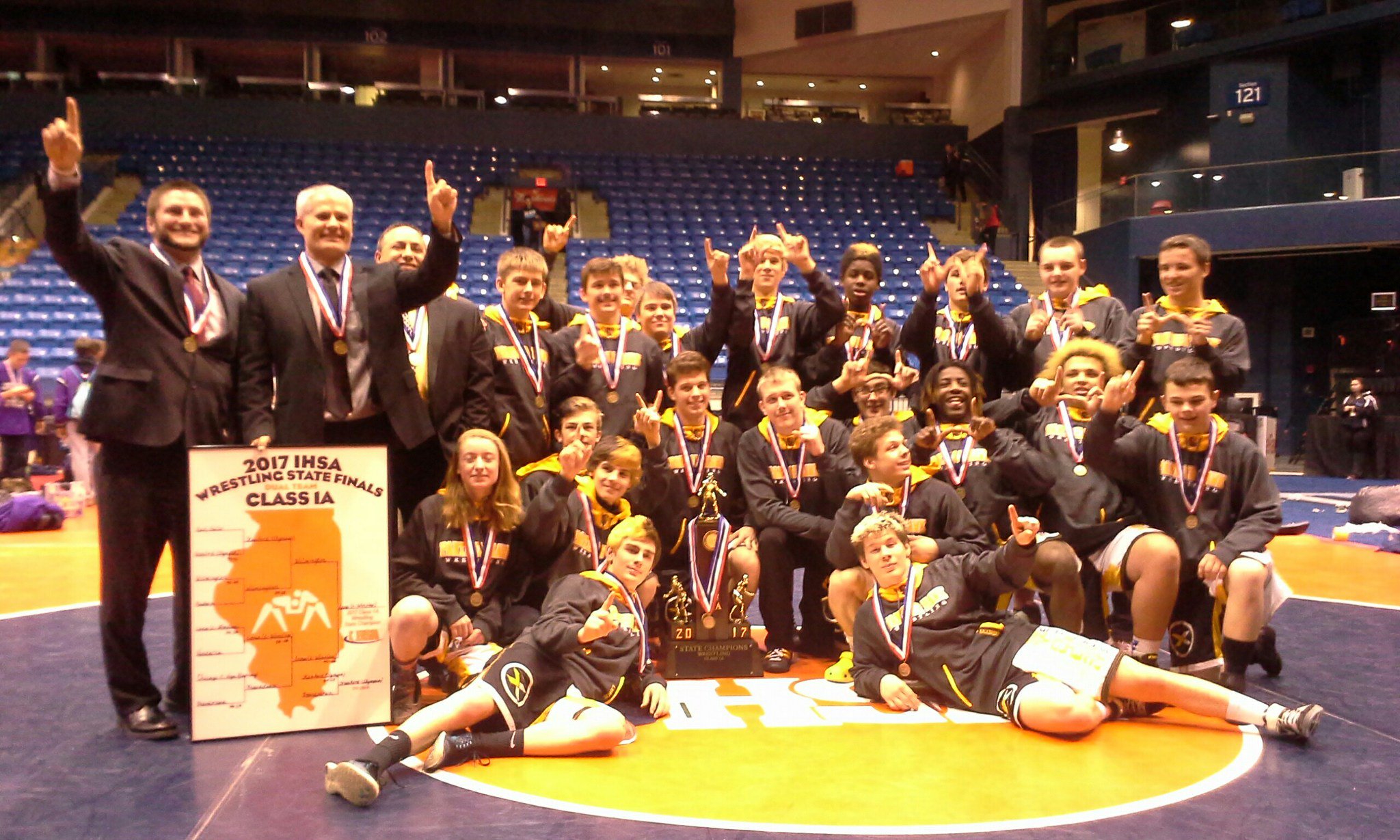 Nothing this season has come easy for Lena-Winslow/Stockton, so Saturday’s hard-fought 1A state title match was only fitting.

In a razor close, back-and-forth showdown against 1A No. 5 Wilmington, 132-pounder Hunter Luke prevailed by fall at 5:51 to secure the 1A state title Lena-Winslow/Stockton.

It capped a wild finish that saw the 1A No. 2-ranked Panthers win three of the final four contested matches and overcome a 30-28 deficit with three weights to go.

“I wouldn’t have this any other way,” said Lena-Winslow/Stockton coach Kevin Milder of the hard-fought nature of the title. “Those are the ones you remember the most.

“We’ve talked all year that when you beat teams 70-0, 84-0 or whatever it is, they don’t mean as much, but when we beat the Dakotas, the Byrons, the Clinton, Iowas, and the Wilmingtons, that’s what means something, and this means something.”

It was the first state title in program history for Lena-Winslow/Stockton, which won a loaded regional that saw the Panthers end Dakota’s four-year run as 1A dual team state champion.

It was also the first state title and second career trophy for Milder, now in his 23rd year as coach.

“I think this says a lot about our program as a whole,” Milder said. “We’ve had a lot of kids who have fought hard and have been good enough to be down here, but we just couldn’t get through the regional. Hopefully, this group is living and fighting for all those guys who couldn’t be down here because they are a huge part of this. It’s a Le-Win/Stockton championship from beginning to end.”