CHAMPAIGN, Ill. – No. 15 Fighting Illini wrestling won eight of the ten matches to defeat No. 13 Michigan, 34-6, on Friday (1/20) evening at Huff Hall. No. 6 Zane Richards, Kyle Langenderfer, No. 1 Isaiah Martinez, and No. 12 Zac Brunson each earned victories over ranked opponents, while No. 13 Emery Parker and Brooks Black added in pins to pad the victory. The win improves Illinois’ dual record to 3-2 overall and 2-2 in the Big Ten. It’s the program’s largest win over a ranked opponent since beating No. 21 Virginia 39-7 as part of the ACC/Big Ten Clash on November 15, 2008.

“It’s probably the best they’ve wrestled as a group all year for sure,” said Head Coach Jim Heffernan. “The score probably wasn’t as indicative, as how close as a lot of the matches were. We won the close matches. We won the [ranked] matchups, two guys are ranked pretty high, and that makes a big difference. We knew it was going to be a very competitive meet, with a lot of competitive matches, but I think our guys had a lot of energy and emotion and looked pretty good.”

Leading 13-3 after four bouts, the Illini middleweights served the decisive blow with a sweep of three ranked Michigan wrestlers, putting the dual out of reach.

157-pounder Kyle Langenderfer started it off with a 2-1 decision in tiebreaker one against No. 9 Brian Murphy. The two wrestlers traded escapes, Langenderfer (15-4) in the second and Murphy in the third, forcing sudden victory. After a scoreless 1-minute overtime period, the Illini senior rode out Murphy to enter the third period needing just an escape to win the match. Midway through the second 30-second period, Langenderfer got the escape to upset Murphy.

“Tonight was definitely a big turning point, especially with this being an in-state rival,” Langenderfer said about the win. “This is a kid I wrestled in high school for a state championship, so there’s a little blood there to start.”

After going 2-2 at Midlands, Langenderfer has bounced back to start off Big Ten season with three victories.

“Just coming off midlands, my weight wasn’t right and I was doing things my own way, it really wasn’t working out for me, Langenderfer explained. “The coaches and I kind of regrouped after midlands, got the weight under control and started working on the finer things, the little details. It’s starting to come through which is nice.”

Martinez continued the momentum in the much-anticipated matchup against second-ranked, and undefeated, Logan Massa. Martinez (16-0) grabbed a takedown with under a minute to go in the first period. Massa earned an escape in period two, but was unable to get any closer as the two-time NCAA champion maintained his perfect record to start the season.

“I was just excited to come in,” said Martinez of the matchup. “You’ve got to be happy when there’s a big match, No. 1 versus No. 2, and this is my third year doing it. “It’s my third year being No. 1; that’s why I love this sport so much, just because of the challenges. [Massa] is a freshman; he’s the No. 2 wrestler in the country and that’s why I love what I do. Going in to the match, I knew he was good so I tried to be focused and just control the pace and the position.”

In the third consecutive tight match of the dual, Zac Brunson defeated No. 8 Myles Amine, 3-2, to clinch the dual victory for the Illini. Like Martinez, Brunson (21-3) earned an early takedown in the opening period and used a third-period escape to win the match.

The victory marked the 96th of Brunson’s career, moving him into a tie with Nate Patrick for 25th on Illinois’ all-time list.

In addition to the three hard-fought victories that sealed the match, No. 6 Zane Richards bounced back from a tough loss last week to set the tone for the Illini with a 7-4 decision over No. 4 Steven Micic.

Richards (15-2) opened the scoring with a takedown in the opening minute of the period, but a takedown by Micic in the second period leveled the score, 3-3, entering the final period. After an escape by the Illini senior to start the period, the senior added a second takedown and a point for riding time to ice the victory.

Three Illini picked up the full six points for the Orange and Blue on Friday night to pad the victory, beginning with a Michigan forfeit at 125 pounds. Emery Parker (19-4) and Brooks Black (6-3) put an exclamation point on the victory with pins at 184 pounds and heavyweight, respectively.

Parker’s pin of Ernest Battaglia (0:37) was his fourth, and fastest, pin of the season, while Black returned after missing the first three Big Ten duals to pin Kostya Golobokov in 0:36.

The Fighting Illini are back in action at Huff Hall on Sunday, January 22 when they dual Northern Illinois at 1 p.m. The match will be ‘Honor and Serve’ day as we recognize those who have served our country. Illinois starters will toss out special camo t-shirts prior to the match.

Illini Notes:
Illinois’ 28-point victory is the largest victory over a ranked opponent since the Illini beat #21 Virginia 39-7 on November 15, 2008 as part of the ACC/Big Ten Clash. It’s the largest win over Michigan in program history.
Zac Brunson’s victory marks the 96th of his career, moving him into a tie with Nat Patrick for 25th on Illinois’ career win list.
Zane Richards moved into sole possession of 24th place tonight with his 97th career victory, passing Carl Perry (96).
Martinez improves to 4-0 against ranked opponents this season and 27-1 against ranked foes in his Illinois career.
Parker’s 0:37 pin of Ernest Battaglia is the fastest pin of his Illinois career and his fourth this season. Brooks Black recorded his second pin of the season.
1,338 fans attended tonight’s dual against Michigan. 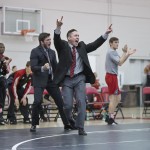 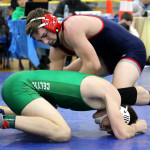