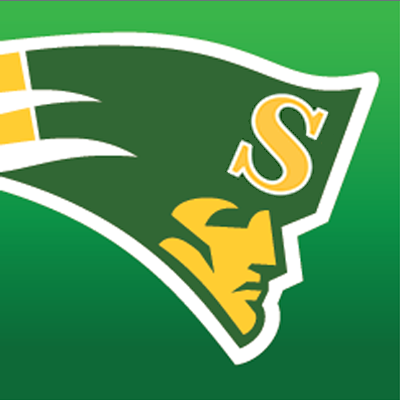 Historic Farina Fieldhouse on the campus of Leyden High School East in Franklin Park was the scene of the 40th annual Leyden Eagle Invite on Saturday, and as it has during the past few seasons, late heroics would decide the eventual team championship.

After watching Conant lift the big trophy for five consecutive seasons, including last year, when the Cougars roared back from a 29-point deficit after the semifinals – Stevenson would finally end the stranglehold Conant had on the field.

Jacobs would hold the lead far into the last session until wonderful work in the finals from both Eric Carter (145) and Dylan Geick (160), along with a key victory, couple with bonus points from a pin by Charles Longsworth (220) sent the Patriots up and over Jacobs who fell just short.

“It’s been awhile since we’ve beaten Conant in much of anything, including a recent dual with (Chad) Hay’s guys,” began Stevenson head coach, Shane Cook, who along with Hay would wrestle at the University of Illinois.

“This was a very good team win – Charles coming through like he did near the end with those extra points from his pin is how good teams win tournaments, and to get that type of help from a young guy on the varsity makes it that much more special for all of us.”

The tourney champs went two-for-three in the finals, with Carter earning his title in overtime over Highland Park junior, Alex Rosenbloom, 7-5.

“Alex is a big strong guy, so I just tried to neutralize his muscle with mine,” Carter said with a wry smile.

Gleick, whose lone defeat on the season came in the first week of the season to Devin Donovan (Wheaton North) in the final of the Moore-Pettyman, won here for the second consecutive time following his 11-5 victory over Jacob Sabella of Jacobs.

“It wasn’t my best effort of the season, especially in my semifinal, but I felt better in the final,” admitted Gleick, No. 2 in the Go Earn It Wrestling Apparel polls behind Trevell Timmons of Lockport.

Patriots teammate, Robert Pavlovics felt short in his bid to join both Carter and Geick on the victory stand when the 182-pound senior ran into No. 3 DJ Penick (Highland Park) who built a 7-1 advantage after one period en route to a well deserved 9-1 major decision victory.

“I just went after it right from the start and did well riding him hard when I had the chance to do so (and) wear him down,” said Penick (20-0) who on January 19 will be a guest of Murray State University football program for an official visit.

Penick, who tosses around mates Rosenbloom and Steven Weathers during the week in the Giants room, would earlier celebrate Weathers’ 4-3 victory in his 152-pound final over David Dudych from Jacobs.

“I did a lot of extra work during the offseason, but, no doubt, being in the room and having an athletic, super strong guy like DJ to go with has helped me more than anything else,” said Weathers (21-1), who won 24 last year for head coach, Chris Riley.

Despite watching three of his guys fail in the finals, Jacobs head coach, Gary Conrad was able to enjoy at least one champion on the day – that coming from freshmen Jake Harrier, who finished a superb tournament with a hard-fought 4-3 victory over Alex Giuliano of Conant.

“Our schedule has really helped all of us prepare for days like this and later on when regionals and sectionals come around,” said Harrier, who sent off No. 6 Kurtis DeGroot (Oak Forest) in his quarterfinal before dashing the hopes of No. 11 Tommy Frezza from Stevenson – and finally Giuliano, an honorable guy at 113 pounds.

Conrad liked what he saw from another one of his young wrestlers, sophomore Justin Peters (106), who lost to one of the best in 2A, Aaron Zebrauskas in the first final of the day by the score of 7-1.

“The kid from De La Salle was experienced and very good on his feet, but Justin wrestled hard and gave him a solid six minutes, and that’s what your looking for right now,” said Conrad, whose call to his uncle (Randy Conrad) here put his club on the guest list for the first time since he took over the program.

Zebrauskas, a state 2A qualifier a year ago and ranked No. 4 at 106 pounds this season, earned his championship ring with a big third period when Peters was unable to finish – allowing the De La Salle junior to turn and earn a near-fall as the final whistle neared.

“I defended two of his shots, earlier, then late in the match – used a pass by – and into a cradle to get the win,” said Zebrauskas (16-3) who suffered two of his losses on the year to Alex Mitchell (Libertyville) and Joey Ruffino of St. Charles East, Nos. 1 and 3 in 3A.

De La Salle big man, Solomon Smith needed just over five minutes on the day to mash three opponents on his way to the 285-pound title for the second straight time to further validate his No. 2 rank in the state.

“The big difference with me this season is up here,” said Smith as he pointed to his noggin’.

“I get way to jittery before my matches, especially last year when my mind and an MCL injury led to me finishing fifth at state after a fourth-place finish my sophomore year.”

Smith says once the season is over, he’ll turn his attention to college with UW-Whitewater showing a strong interest in his services.

Around the brackets, Burlington Central’s Austin Macias (120, 21-0) and teammate, Nick Termini (132, 22-1) each turned superb performances to lift the championship plaque in their weight divisions.

Macias, a two-time state qualifier and third-place medalist last February, appears to be in peak form following his peak effort of the day in the final over No. 6 Brandon Muselman of Oak Forest.

“I’m trying to be smart with the little things this season – to me, it’s the only way to compete for a state title next month,” said the junior, who broke open a close bout with a third period reversal in a 7-1 victory.

The sophomore Termini was equally impressive, using the extensive time in the room alongside Macias, plus the desire to join his teammate on the medal stand in Champaign.

“Austin constantly pushes me in the room – he never lets up and never goes just halfway, so being around that everyday has been great for me, and after getting a taste downstate last year, I want to make a run at the medal stand this time around,” said Termini, who set up a big throw at the end of his bout with Justin Wilcox (Harvard) and finished it with style to register a 5-1 decision.

Termini will likely meet Wilcox for a third time this year when Central takes on Harvard and Johnsburg next Thursday.

Wilcox’ teammate, Josh Fiegel, No. 4 in this weeks state poll, won his first tournament title of the season when he edged Conant senior, Tyler Futris.

“We knew going in that (Futris) liked to and was very good at throwing, so I kept my distance, stayed away from tie-ups, and wrestled smart and with a lot of confidence,” said Fiegel, second at both the Harvard and Granite City tourneys and fifth at the 1A state tournament two years ago.

A second period take-down gave the Bengals star the lead for good, and after a nicely executed reversal gave Sellers a 4-1 advantage, Dziadosz drew closer with an escape of his own until Sellars finished a high single to put his opponent away for good.

“It feels good to win here. I felt good all day, especially in the my final, and this is a great way to start the second half of the season,” said Sellers, who has his eyes on wrestling at Elmhurst College next fall following in the footsteps of his cousin, Jimmy Nehls, who in his final season for the Bluebirds earned all-American honors.

Conant senior and captain, Eric Hominac pinned his way to the 170-pound crown, using just under four minutes to put away a trio of opponents, including Anthony Kluk of Oak Forest.

“This is good,’ began the Cougars senior, now 20-4, who recently won at Lake Park.

“It would have been even better to have won the overall team championship, but winning here feels great, and give a lot of credit for my success this season to coach Hay and our coaching staff.”

“Yeah, I was kind of gassed towards the end of regulation, but I just told myself to keep moving in overtime and looking for an opening (and) when it came, I took it,” said the senior, who was anointed the top seed here.

Skylar Hufeld (220) and his mates from Niles West came the furthest to compete, but the long trip proved worthwhile for the freshmen who recorded a fall at 5:58 over Vernon Hills senior, Collin Turley to carry away the big trophy.

“I actually began the season at heavyweight and cut a lot of weight to get down to 220, and in my final, I thought I was a little quicker which helped me keep the tempo of the match in my favor all throughout,” said Hufeld. 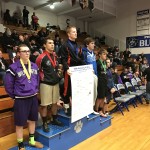 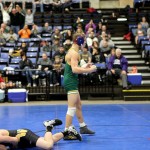