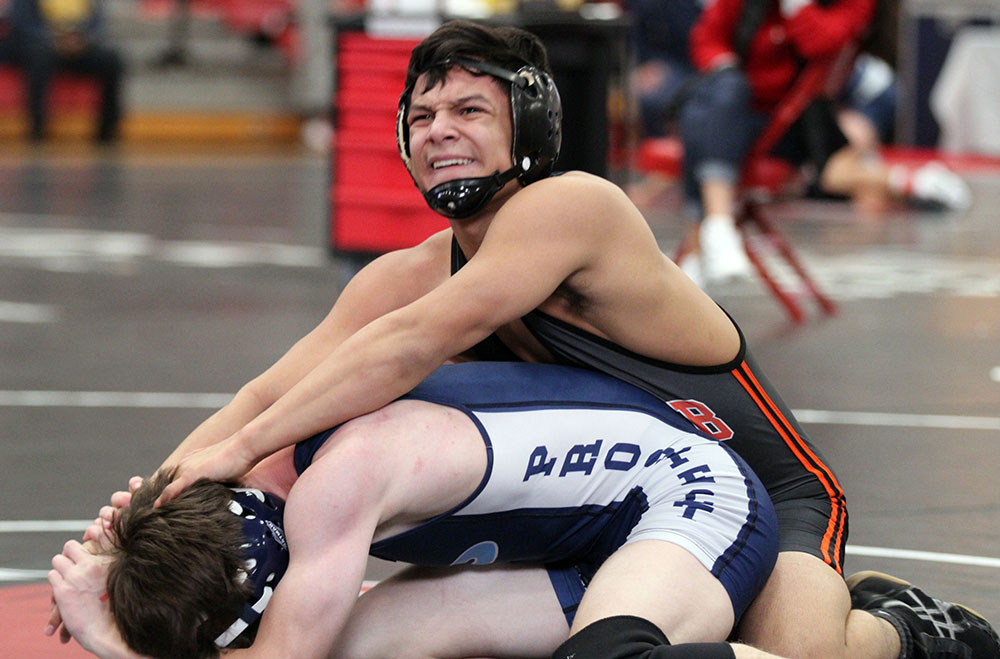 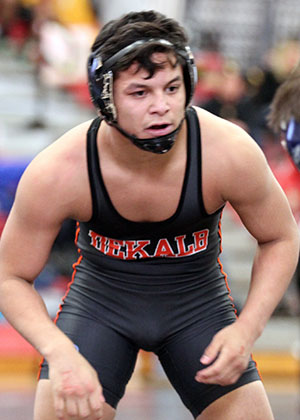 DeKalb’s Fabian Lopez largely took Champaign by storm last year, as one of only two freshmen in Class 3A to make it all the way to the state title mat.

He got a rude welcome on that mat from Plainfield East senior Mike McGee but when Lopez left Champaign as a state runner-up at 120 pounds, he left carrying high expectations for his sophomore season.

“I don’t think anyone expected what he did downstate last year,” DeKalb coach Sam Hiatt said, “but this year everyone knows who he is so he’s going to get everyone’s best match.”

With a 16-1 record and a No. 1 ranking in Class 3A by Illinois Matmen at 126 pounds, Lopez has handled the pressure well. On Saturday at Hinsdale Central’s Rex Whitlatch tournament, he thrived on that pressure.

After posting two tech falls and a pin to reach the finals at 126, Lopez won an 11-3 major decision over previously unbeaten Oak Park-River Forest’s Nico Bolivar, who is currently ranked fourth at 120 pounds in 3A.

Afterwards, Lopez was given the Outstanding Wrestler Award in Hinsdale.

“It was a decent go-round,” Lopez said. “I wrestled (Bolivar) a week before and I was a point away from majoring him there. I knew he’d come at me a little bit harder (in Hinsdale) but I was able to handle him.”

Lopez can pile up points in a hurry in any match. But where last year he relied on a single leg and a duck under, this year he’s added more offense on his feet, he’s turning people for back points, and earning more pins.

And all of it is fueled by a seemingly bottomless gas tank.

“When he’s wrestling really good, he has that high motor going,” Hiatt said. “Not many people can keep up with him, he’s very physical, and when he’s that Fabian, there’s not too many people that can stay with him.”

Entering his freshman year, Lopez knew he was physically ready to push the pace. But he was surprised to learn that a lot of his opponents couldn’t match him.

“A lot of freshmen don’t understand how hard these varsity matches are, but I came in ready for it,” he said, “and my conditioning was better than a lot of the guys I wrestled last year.

“My dad (Fabian Lopez, Sr.) pushed my brother and I really hard. He made it clear as far as how hard he expected us to work and I credit him for most of my success. He’s always been there, along with the rest of my family.”

The last month or so of his freshman season taught Lopez everything he needed to take his next step in the sport, and can be traced to one big loss and one big win.

The loss came to Kaneland’s Austin Kedzie in early January and it made him better. “I learned that I had to work even harder to beat all these more mature guys,” Lopez said.

Lopez avenged his loss to Kedzie at the Big 12 Conference tournament, winning a 14-4 major decision on the title mat. Lopez then won a regional and a sectional title, beating Huntley’s Josh Stenger on the title mat at both tournaments.

It was after winning a major decision over Stenger that Lopez truly began to believe he could make a run at a state title.

He won by fall, major, and 9-4 decisions in advancing to the state title mat before losing by tech fall to McGee.

“(McGee) and I had the same style — never stop wrestling, and we were both slick and funky,” Lopez said. “He was just more mature and he beat me at it. I gave it the best effort that I possibly could.”

Lopez finished his freshman year with a 43-6 record and vowed to work even harder. His eighth-grade brother Damien also wrestles, providing a live-in practice partner.

“Late-night runs and longer practices,” Lopez said. “I didn’t do that as much as I should have been last year. I have a mat at home and I could have been working on technique with my brother. So this year I’m just doing more of everything.”

At this year’s Barrington tournament to start the season, Lopez lost a 6-5 decision on the title mat to Burlington Central’s Austin Macias, last year’s 2A state champion.

Lopez is currently ranked second behind Macias at 126 in Illinois Matmen’s Go Earn It POWER rankings, and the loss taught Lopez a valuable lesson.

“I didn’t wrestle my match. I let him control the ties and take more of the shots,” Lopez said. “I wasn’t moving my feet like I usually do and to be honest, I went in there too nervous and I ended up getting gassed out. After that I got back in the room and worked harder because not a lot of kids have been able to do that.”

Since that loss, Lopez has beaten every one of his opponents by either a major decision, a tech fall, or a pin.

“I still need to work on a lot of stuff but I’m happy with where I’m at,” Lopez said. “Getting the title at Whitlatch helps with my confidence and I feel like I’m where I need to be at this point in the season. I feel good.” 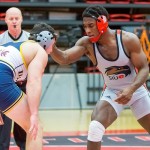 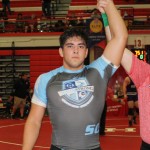