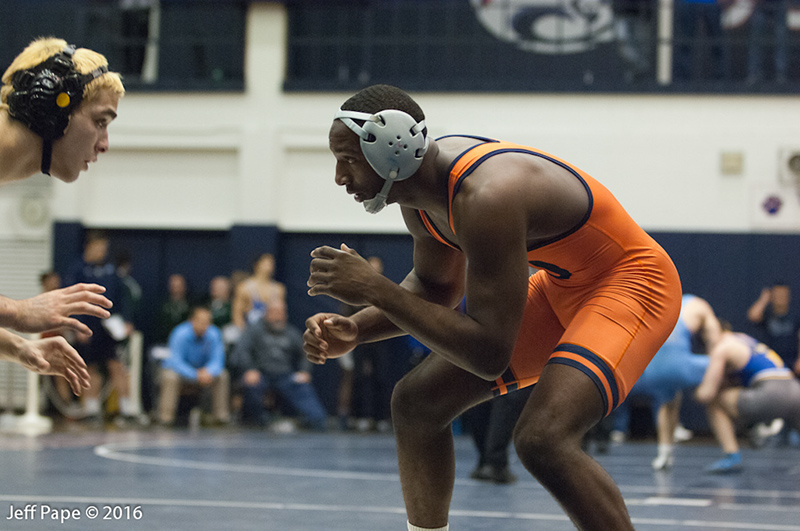 Taking seven weights classes at the Conant sectional Saturday night, the Oak Park Huskies look to be rounding into form at the right time for the state tournament.

First-year starter junior Peter Ogunsanya (106) has been on top of his game the last six weeks. Taking a 32-7 record into the Conant sectional, he hammered St. Charles East’s Joe Ruffino 16-3. With long arms and legs, Ogunsanya has a series of effective shots.

“I didn’t place at the Ironman and since then I’ve tried to push myself in practice and it’s paying off,” said Ogunsanya. “I’ve been attacking more and I am getting more takedowns. I am looking forward to State.”

Glenbard North’s Austin Gomez (126) took control of the match against Oak Park’s Anthony Madrigal for a 8-1 decision. Scoreless after the first period, Gomez got a take down and put Madrigal to his back with 15 seconds left in the middle frame.

“Kyle’s a lot stronger this year,” said Conant athletic director John Kane. “I think that’s the difference in him scoring and scrambling better.”

Mount Prospect’s Miguel Romero pinned Oak Park’s Gabe Townsell at 3:36 in the semifinal. In the wrestleback, Townsell came back with two pins and had a battle against Glenbard North’s Mike Milan. Townsell scrambled hard and got a takedown with 32 seconds left to take a 5-4 decision. He beat St. Charles East’s Niko Darian 7-4 for third place.

“With Gabe it’s about mindset,” said Oak Park coach Paul Collins. “Maybe the loss is a blessing in disguise. He should be in the mix to place high at State.”

Oak Park’s Michael Ordonez (145) handled Lake Park’s Jackson Schoen 10-3. Teammate Isaiah White (160) hit a series of takedowns before pinning Glenbard North’s Tom Czernek at 3:57. Schaumburg’s Logan Gruszka (170) pushed the pace with two takedowns in the first period and put the Huskies’ Rolliann Sturkey to his back in the second to take a 7-3 lead. But the always explosive Sturkey powered through a shot and pinned Gruszka midway through the third.

“Logan is a stud,” said Oak Park coach Mike Powell. “Rolliann’s nerves got to him in the first period, but you have to give Logan credit. Rolliann just never gets tired; he can wrestle forever. He’s got incredible offense when he gets going.”