Bilal Bailey, Jr, TF North, 145 – Dominated the 145-pound bracket at the SSC conference tournament, pinning his way to the finals and then defeating Rocco Palumbo (Richards) by tech fall 17-2 in the championship match. 27-1 on the season.
Trevor Chumbley, Jr, Marmion, 132/138 – Won the 138-pound CCL title beating #3 ranked Dominick Ambrose of Providence 5-0 in the semis and #1 ranked Fidel Mayora of Montini 5-1 in the finals.
Kendall Coleman, Sr, Mt Carmel, 145 – Won CCL tournament despite being seeded 4th. Avenged two prior losses to #1 Jake Stiles of Montini with a 4-3 win in the semis.
Blah Dahnweih, Jr, Dekalb, 195 – Beat previously undefeated #3 Jacob Meyer of Barrington 10-4 during the week and then won the NI Big 12 conference title on Saturday with a 5-1 win in the finals over #3 (at 182) Nick Stemmet of Yorkville. Stemmet had beaten previously undefeated and 2A #1 ranked Alex Harvey of Rochelle in the semis.
James Schnerre, Sr, Orion, 145 – Bumped up to 152 Thursday (his Senior night) to wrestle Kewanee’s #3 ranked Lewis Robinson and won 2-1. Won second straight Bob Mitton Orion Invitational over the weekend beating HM Christian Reynolds from Clinton in the finals by major decision.
Real Woods, Sr, Montini, 132 – Just dominant. Won CCL title with 3 first period falls. Helped lead Montini to the team title. 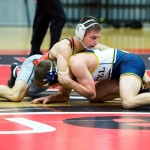