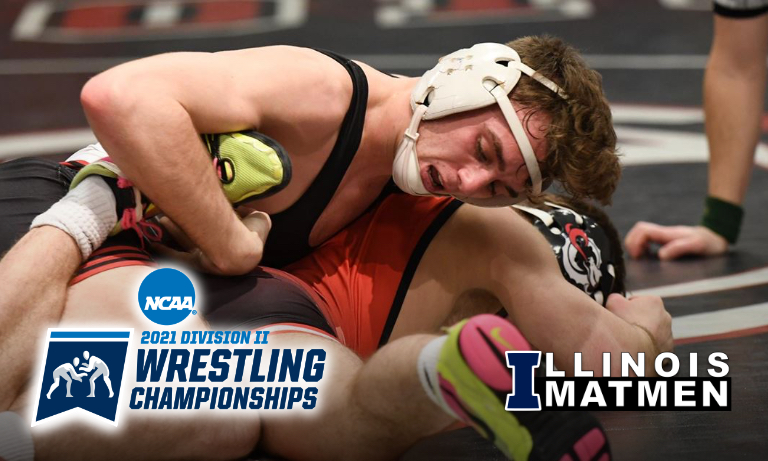 Joey Bianchini (St. Cloud St.) finished 2nd in the 141 lbs. weight class at the 2021 NCAA Division II National Championships this past weekend. Bianchini qualified for the National tournament last season, but did not compete due to the COVID pandemic. Last year he was given honorary All-American status based off of his season performance, this year he got to earn that All-American status on the mat.
Bianchini the 3 seed, defeated Kuster (Drury) 5-3 and Schwartzkopf (McKendree) 8-7 to put himself in the semi-finals against the 2 seed Mckenna (Notre Dame-OH). He upset the number 2 seed convincingly, winning by major decision 9-1 to give himself a shot at a National Title. In the finals, Bianchini was in a tight match with Isiah Royal (Newberry), knotted 5-5 in the third period. Bianchini took an errant shot, and Royal capitalized with a go-behind takedown. Bianchini escaped, but couldn’t get the winning takedown as time expired. His 2nd place finish helped St. Cloud to the Team Championship, and cemented his legacy as an All-American.
Illinois had three other wrestlers achieve All-American status at NCAA DII Nationals, Joe Arroyo (UW-Parkside), Cory Peterson (McKendree), and Josh Jones (McKendree).
Joe Arroyo (UW-Parkside) finished in 3rd place at 125 lbs. Arroyo came into the tournament unseeded, and in the first round upset the number 4 seed Portillo (Nebraska-Kearney) 20-6, before falling to eventual Runner-up, Daggett (UNC-Pembroke), 9-0 in the quarterfinals. In the consolation bracket Arroyo rallied defeating the 6 seed Lenox (Gannon) 8-2, the 7 seed McManus (Minnesota St.) 1-0, Mejia (McKendree) 3-1, and Wellman (Ashland) 4-3 to place 3rd, and become a Division II All-American.
Cory Peterson (Mckendree) finished 4th at165 lbs. Peterson graduated from a Missouri H.S. but is an Illinois native so we included him on our list. Peterson the 8 seed had a bye first round, then upset the number 1 seed Fitzpatrick (St. Cloud St.) 3-2 in the quarterfinals. In the semi-finals he lost a close match 3-2 in overtime to Farenchak (Gannon). In the wrestlebacks, Peterson beat Dean (Belmont Abbey) to advance to the 3rd place bout where he lost the rematch to Fitzpatrick (St. Cloud St.) by fall. Peterson ends the season as a Division II All-American.
Josh Jones (McKendree) finished 4th at 174 lbs. Jones received a bye in the first round, then lost in overtime 3-1, in the quarterfinals to Beemer (Ashland). In the wrestlebacks he tallied three wins by decision over Jordan (Central Oklahoma) 4-2, Garraway (Nebraska-Kearney) 7-2, and Samn (Indianapolis) 7-3 to place himself in the 3rd place bout. In the 3rd place match Jones had a rematch against his quarterfinal opponent Beemer (Ashland), where he lost another tight decision 3-1. Jones finished the tournament in 4th place as a Division II All-American.
Other Illinois wrestlers competing, Ian Kuehl (McKendree) 285 lbs. did not place.
Share on facebook
Share on twitter
Share on pinterest
Share on reddit