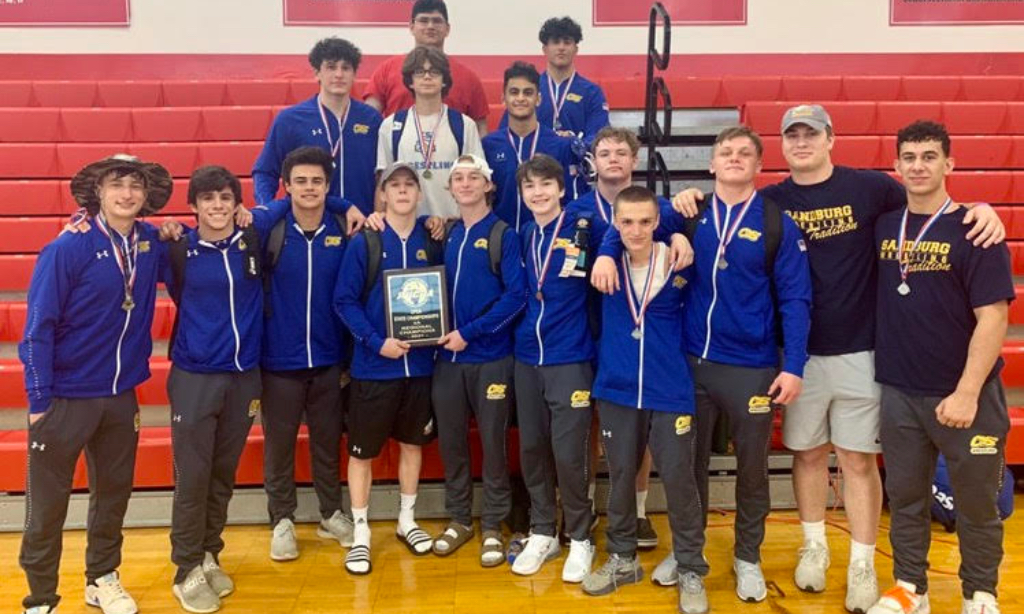 CHICAGO • Carl Sandburg came into the Marist 3A Super Regional with high expectations against some very strong competition, and, according to their head coach, Clinton Polz, “for the most part, they performed.”

Currently rated as the number four team in the state by the I.W.C.O.A., Sandburg left little doubt they were ready for the season’s first tournament. As a team, they pushed eleven wrestlers into the finals, two in the consolation finals, and one wrestler placed sixth. Having fourteen wrestlers show up and place, earning team points multiple matches throughout the day, helped separate them from the field.

“Having all fourteen kids wanting to [participate in the series] was big for us,” Polz said of his team’s commitment. “Filling a full line-up helps bring the excitement there for them wanting to compete. And for our seniors to have a couple chances to get some final matches and some last tournaments in is also good. The day felt good. It was nice to just wrestle in a tournament—it’s been a while. Everyone seemed pretty positive, so there were a lot of good takeaways from it.”

Like most teams, with the dual season being the only season until this past weekend, it played differently for each program. For Sandburg, they found the positives in the abbreviated season, especially in how their wrestlers approached their tournament matches based off their dual season experiences.

“I do think the longer dual season with no tournaments helped us,” Polz admitted. “The kids were pushing for majors and bonus points because that’s what they’re asked to do in duals and, a lot of times, that doesn’t carry over in tournaments. This year it really seemed to carry over because that was the expectation all season long.”

Taking the first individual title for Sandburg was returning state runner-up and currently number-one ranked Sammie Hayes. He would advance by fall in his semifinal match over Eduardo Nunez of Oak

Lawn Community, and, in the finals, he fought through and won a tightly contested 2-1 decision over Mt. Carmel’s Eddie Enright.

Following Hayes, Matthew Parker would take to the mat and win by fall over Brandon Weber of Marist. This was Parker’s second fall on the day, the first came in 00:23 during his semifinal match against Stagg’s Yusuf Ahmed. “Parker winning as a senior was great. I am just happy for all of these seniors getting one last shot.”

At 138, Brant Kirby, coming in with a 9-6 record, would be a nice surprise for Sandburg as he claimed an individual championship of his own. His journey over the past four years, and his determination to make the most of his opportunities, was rewarded this past Sunday.

“Kirby has been great,” Polz said. The only way to get into our lineup this season was to weigh-in at 145 pounds and bump to 152 for most of the season. Finally, when a spot opened up for him at 138 pounds, he was able to win the tournament as a kid who wasn’t able to make our lineup until his senior year. He ended up catching the kid in the finals on his back and taking advantage of that. Him winning a title, that was pretty special. His performance was definitely one of the biggest positives for us from thisweekend.”

In the 145-pound championship match, Elliot Cook needed overtime against Andrew Dado of Marist with a 2-1 decision in the first tiebreaker.

Zach Bateman at 160-pounds was another great story for Sandburg. “He was in our line-up at 182 pounds and he is a kid who is always willing to do what is best for the team. All of our kids are willing to do for the team, but him more than most—he’ll go wherever we feel is best for the team. He could have been at 170, but he decided someone was going to have to move for the team and he decided to do it. In the end, he took advantage of it.” He won his title with a 6-2 decision over Tommy Boland of Marist.

Sandburg’s final champion would come at 220 pounds. Mike Rydell would win by fall in his semifinal match in 00:19 over Argo’s Bryan DeSantiago. And, in his title bout, he would claim a 6-2 decision over Marist’s Luke Liberatore.

“Tyler Milone was a state qualifier last year,” Polz said. “I know he expected a little bit more of himself, but he has two more weeks here. He has been in our line-up the past few years, and he is looking to finish his season on a high note.”

Taking third was Kasey Kolke (113), and Hamza Hasan (195). “Hasan is a first-year starter who has come a long way,” Polz explained. “I would have liked to see him get forty matches and see what would come of his progress and where he’d be. But he only had one loss coming into this tournament and took third—all positives.”

Rounding out the medalists was sixth-place finisher Farris Askar at 152 pounds.

In looking at what the team needs to focus on heading into the Sectional this weekend, Polz only wanted to focus on the positives. However, he did acknowledge that each wrestler is on his own individual journey this season, and with that journey there may be different expectations. But, in each journey, he has seen the team come together, and that is always special in any program.

“I think everyone has a little bit of a different purpose right now,” Polz explained. “Our younger guys are trying to get matches and trying to get experience, and our seniors are trying to give themselves just one final shot. There are two different goals, really. Normally, we are all on the same page, but with this season it is a little different. These seniors haven’t been in school—they graduated—and they are sticking it out to get one last shot, but it’s cool because the team is molding together. Even with the two different goals, the ones trying to get experience and matches mixed with seniors trying to get a last chance, they are taking it upon themselves to teach the kids what they have learned over the years and how these types of tournaments work with warm-ups. So, seeing them come together with a common goal has been gratifying.”

In regard to the state series as a whole, Polz could not be any more thankful for his team’s and the state’s opportunity to finish this season the right way.

“The fact that people have put in the time and provided a state series for these kids—the things that we felt are so positive for our program and what others probably feel as well—giving these seniors a couple last matches and a chance to end on a tournament the way they want to do it has been amazing. And the other kids who haven’t had a lot of matches now have this series. At least somebody stepped up, and the I.W.C.O.A. was the one to provide these kids with the opportunity. I know everyone is not here, but all you can do is wrestle the guys that are there, so we are really grateful for them providing a series for these guys, and we are excited to be wrestling these next couple of weeks.”