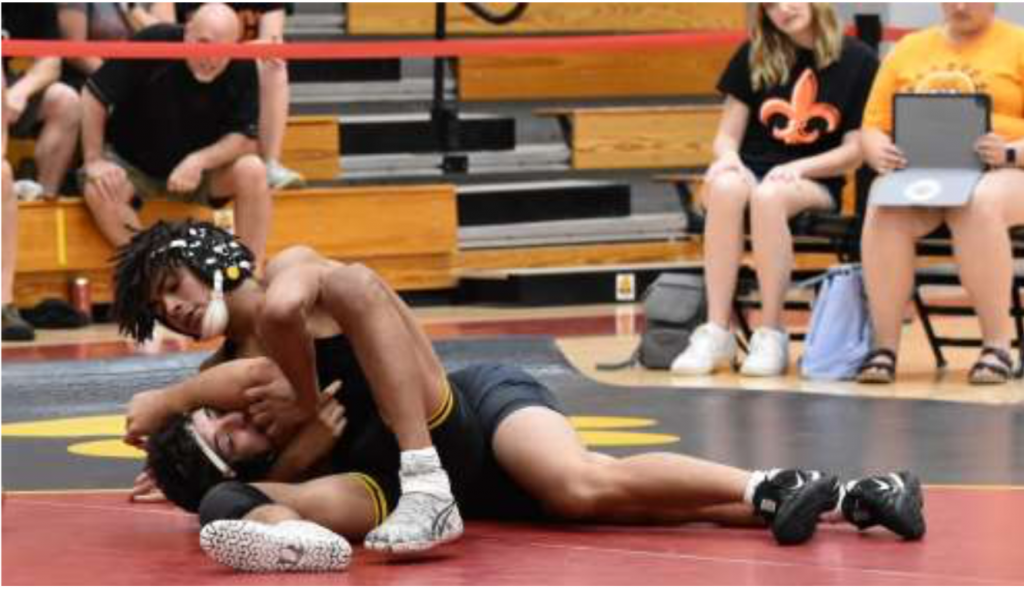 BATAVIA • Glenbard North came into the Dukane Conference Dual Team Wrestling Championship Tournament on Friday afternoon and did what Glenbard North has done since the inception of the conference: they won. Due to COVID restrictions, it was not possible for the traditional conference tournament to be held where individual champions would be crowned. To replace this, the conference decided on a dual team format to declare an overall team champion.

The seeding was based on the season’s conference dual meet records, and Glenbard, 7-0 in DKC competition, would take the one-seed. Rounding out the other three top seeds would be St. Charles East, Wheaton North, and Batavia, respectively—the five through eight tournament was wrestled earlier in the day.

In the opening round, Glenbard defeated host Batavia 56-15, and felt the dual helped focus their minds for the championship match against St. Charles East. The Panthers, now under the first-year leadership of Travis Cherry, only the third head coach in the program’s history, was proud of what his team was able to accomplish.

“Against Batavia,” Cherry said, “I think the dual went as we expected. We came in knowing we had to wrestle tough against a solid Batavia team—and the guys did that.”

But, Cherry’s team did more than wrestle tough in their opening round; they won ten of fourteen matches and were able to allow a well-deserving junior heavyweight to take the mat. “Ryan Yabi has been great for us all season,” Cherry explained. “He has been the difference in the improvement [starter] Paulie Robertson has made, and, in any other program, Yabi would be a varsity starter. It was nice to see him take to the mat and pick up a win for the team. And not just Yabi, but everyone stepped up, did their job, and wrestled well.”

Along with Yabi, Jack Barracca, Cody Dertz, Jimmy Marre, and Paul Woo would also earn falls for Glenbard. Lauden Edwards and Nolan Allen each earned a major decision in their matches, and Kyler Kradle recorded a regular decision. Patrick Curran and Blake Maday each won by forfeit.

Once the finals were set between Glenbard and St. Charles East, the first match-up would be at 145 pounds. This would be a crucial stating point for Glenbard because this weight class played into a series of wrestlers where the Saints were fairly strong.

In a back-and-forth match with a variety of scrambles, Glenbard would settle in and strike first as David Gilliam would win by fall over Max Sztuk with twenty-two seconds left in the match.

“David Gilliam really came out and set the tone for us and the dual,” Cherry explained. “He lost earlier in the season to [Sztuk], but he has been wrestling well and that was a big win for him and the team. He is a senior and we asked him to lead the way—he did just that.”

Glenbard would drop the next two weights, an overtime loss at 152 pounds to Charles Fialka, and a major decision loss to Elijah Chiaro at 160 pounds. The team score would read 6-7, in favor of St. Charles East, but the Panther upper-weights would take control with four falls in the next five matches.

Cody Dertz, Kyler Kradle, Patrick Curran, and Paulie Robertson would make a profound statement with only one match making it into the third period—Blake Maday, at 220 pounds, added a regular decision to the total. This pushed Glenbard into the lead with a 33-7 score.

While both teams would alternate forfeits at 106 and 113 pounds, Paul Woo, Matt Chi, and Nolan Allen would take three of the next four matches to close out the dual and the conference championship with 51-18 victory. Glenbard would also end its regular season with a perfect 19-0 dual meet record.

As for Cherry, in his first season at the head of the program, he could not help but acknowledge what this win meant to him. “It is special,” Cherry said. “Hahn and the rest of the coaching staff here laid a great foundation for me, and I was able to keep that style of training going. We have been together since the end of June last year, and I am so proud of these guys and what they have gone through and what they have accomplished so far.”

From here, like the rest of the state, Glenbard will wrestle on Sunday in their assigned Regional as the I.W.C.O.A. State Championship series begins.

“We are looking forward to Sunday,” Cherry said. “We will be at Joliet Junior College and there is some quality competition that we will have to wrestle. And, even where teams may not have full lineups, we know there are a lot of tough individuals out there that we will have to be ready for and battle with. If we trust our training and handle our jobs, hopefully we can end up at the top of the podium again and work ourselves into the [I.W.C.O.A.] Dual Team Championships.”
For Glenbard’s six seniors, as well as seniors across the state, this will be their final opportunity for individual success. “For us,” Cherry explained, “our seniors have been amazing. Lauden Edwards, Matt Chi, David Gilliam, Jack Barracca, Kyler Kradle, and Patrick Curran have made this season work for the program. I give them all the credit because they did not have to stick around and do all of this—they have all been great leaders and examples to the younger guys. With the goals we set as a team, and their commitment to the program and to their teammates, I think they are seeing it all payoff. I hope they all end on note they can be proud of.”