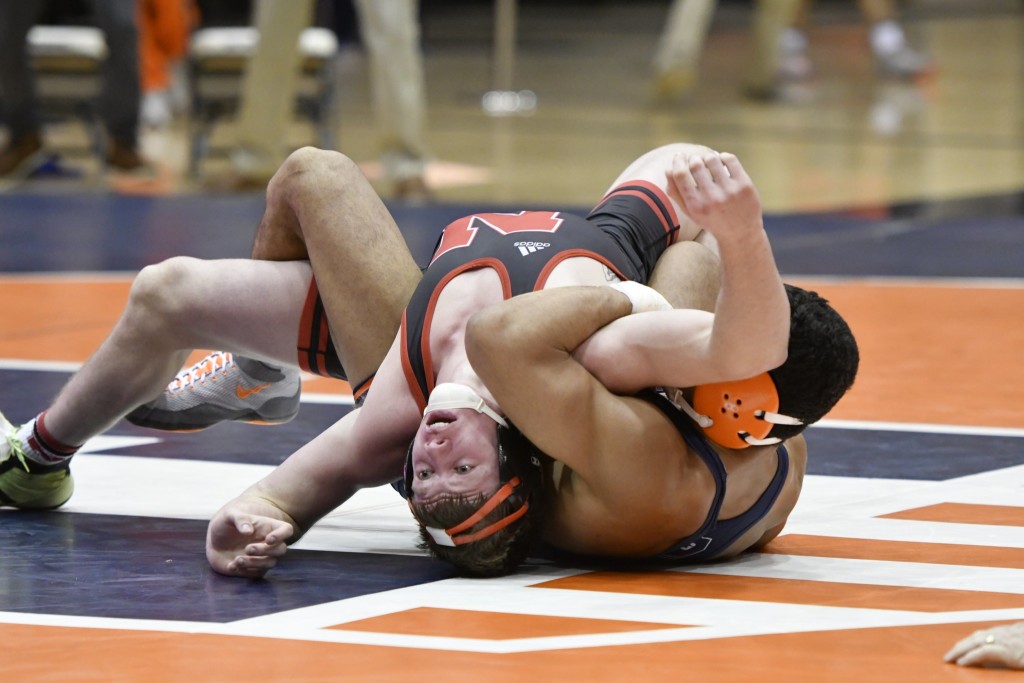 CHAMPAIGN, Ill. – In its 10th annual ‘Great Escape’ match, the Fighting Illini wrestling did just that, escaping No. 20 Nebraska, 18-17, on criteria. Redshirt freshman Mike Carr and redshirt junior Emery Parker came away with the big upsets of the night, taking down a pair of top-10 Huskers to spur the Illini to victory. The win improves Illinois to 2-2 overall, 1-1 in the Big Ten, while Nebraska drops to 2-3 overall and 0-1 in conference action.

“It was a really good effort and fight to beat a good team,” said head coach Jim Heffernan. “We knew it was going to be pretty evenly matched, and it was about as even as you can get. The fight from Michael Carr was great tonight; he beat a really good guy. It was a huge match in a dual meet. Emery [Parker] was phenomenal. That’s a really good guy he was wrestling. Down 6-1 going in the third period, he found a way to win, and that got our guys really excited.”

The Illini and Huskers went to the third criteria of tiebreaker rules to determine a winner on Friday night. After both teams tied with five match victories each, and none coming by fall, the tiebreaker rules went to total match points scored. Illinois’ 51 points across the ten bouts edged Nebraska’s 49 team points. The win by criteria was the first for the Illini in its nine seasons under head coach Jim Heffernan.

Starting the dual at 133 pounds, the Orange and Blue scored a pair of victories from redshirt freshmen Dylan Duncan and Mike Carr in their Huff Hall debuts. Duncan led off with a 6-1 decision against Brian Peska behind a takedown in both the second and third periods to go along with two minutes, 14 seconds of riding time. Carr compounded the momentum by taking down No. 8 Chad Red Jr. at 141 pounds behind two first-period takedowns. While Red Jr. was able to cancel out the first takedown with a reversal, Carr’s second takedown proved decisive, as the two 141-pounders traded escapes in the second and third period.

“I saw improvement in handling my anxiety when I got out there,” said Carr. “taking what I do in practice when I get out there on the mat. This was one of the first times I’ve broken through [on the mat] and was able to wrestle a lot better.”

Nebraska rebounded at 149 pounds and 157 pounds with two major decision victories to take the lead from the Illini, 8-6. No. 8 Colton McCrystal shutout Eric Barone, 8-0, while No. 9 Tyler Berger used four takedowns to defeat Kyle Langenderfer, 11-2.

Trailing by two, Coach Heffernan and the Illini turned to No. 2 Isaiah Martinez to turn the tide back in favor of the Orange and Blue. Martinez wasted no time in dispatching of Johnny Blankenship, tallying 12 near-fall points in route to a first-period tech fall. The 18-2 five-point victory was the redshirt senior’s fourth in as many matches this season, needing just two minutes and 51 seconds to finish off his fastest tech fall of the season.

After Nebraska won their third match of the dual, a 4-2 decision by 174-pounder Beau Breske over Illini freshman David Riojas, the Illini and Huskers entered 184 pounds tied, 11-11.

Pitting Nebraska’s sixth-ranked Taylor Venz against Midlands champion, and 12th-ranked, Emery Parker, the two grapplers battled through a scoreless first period that saw Parker scramble out of multiple tough shots by Venz. Following a Parker escape to open the second frame, Venz took a commanding lead with a takedown and four back points. Venz added another point to begin the third period to take his biggest lead of the match, 7-1. With the clock trickling down towards one minute remaining, Parker gutted out one of his best periods of the season. Parker got his first takedown of the match with 55 seconds left on the clock to cut the deficit to four, 7-3. Parker rode the redshirt freshman from Nebraska hard for the next 20 seconds, breaking Venz with 31 seconds remaining for a match-tying four-point near fall. With the Huff Hall crowd roaring, Parker turned Venz again with 12 seconds left for a two count that withstood a challenge from the Nebraska bench. After the two points were confirmed, Parker rode out Venz for the remaining 12 seconds to finish off the comeback victory.

“I saw the score, it was 7-1, and I knew I had to score back points,” said Parker. “So, that was my main focus, whether I lifted and returned, or scored as many takedowns as I needed to get those points, I was just thinking about how to get it done the whole time.”

Just as the previous match turned late in favor of the Illini, 197 pounds went the way of Nebraska. Tied 2-2 entering the second sudden victory period, Nebraska’s Eric Shultz took Illinois’ Andre Lee to the match for a winning takedown, 4-2, to tie the dual once again at 14-14.

The Huskers took the lead one final time in the penultimate match of the dual, as David Jensen (Nebraska) defeated redshirt junior Deuce Rachal 7-2 at heavyweight.

With total points tied at 47 points apiece, Illinois turned to 125-pounder No. 15 Travis Piotrowski to win the match and the dual. Wrestling Mitchell Maginnis, Piotrowski fired shots right out of the gate, scoring a takedown 29 seconds into the first period. After an escape increased his lead to 3-0 in the second period, the Illini sophomore held of advances by the Nebraska senior, and added a point for riding time, to win 4-2.

The two-point victory gave Illinois the edge in the team score for the 18-17 victory against the 20th ranked team in the country.

The Fighting Illini are back in action on Sunday, January 7, as Illinois hosts the Northwestern Wildcats at 1 p.m. The Illini will be supporting the fight against cancer in their annual ‘Takedown Cancer’ Day. Fans are encouraged to wear pink with the first 500 fans receiving pink Illinois t-shirts. The match will be streamed live via subscription on BTN Plus and FloWrestling.