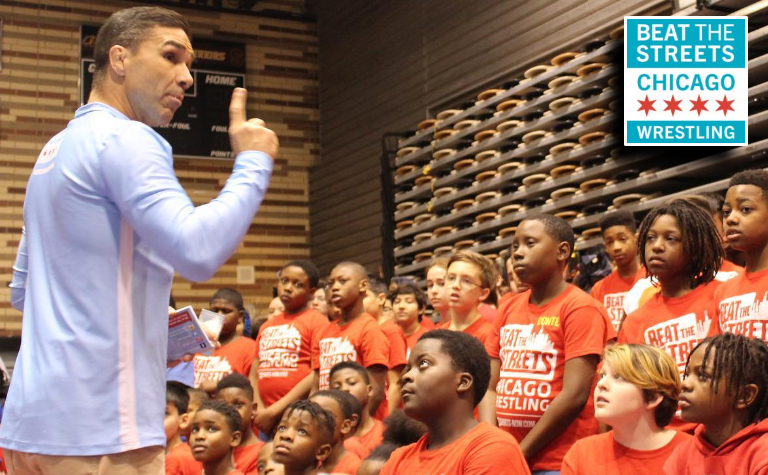 After a 20 year coaching career, highlighted by back-to-back IHSA Team State Championships, former Oak Park River Forest (OPRF) Wrestling Coach Mike Powell, has shifted his sights on new goals. Powell started working with Beat the Streets (BTS) Chicago, a little over three years ago, with a simple goal. “To build a sustainable NFP (non-profit) that provides quality wrestling throughout the city. With the ultimate goal of kids building up themselves and their lives, using the world’s oldest and greatest sport.” BTS Chicago has been steadily growing, and Coach Powell is the driving force behind the organization’s growth.

Powell, currently serves as Executive Director of the Beat the Streets organization, and has made great progress in a short period of time. We asked Coach Powell about his recent transition, “After 20 years of incredibly rewarding HS coaching I was looking for another challenge. When Dan Willis reached out to me, I jumped in with both feet. City wrestling had decayed throughout the years, despite having awesome kids and great coaches, while OPRF had thrived.” We questioned Powell as to why schools like OPRF and Mt. Carmel located in Chicago, have been successful in wrestling, but other Chicago high schools have not? “ A single street divides Oak Park from the west side. The difference was that city resources had been drained, while we enjoyed the spoils of school and community support at OPRF. It was apparent that if our (BTS) team could inject the city with resources that support our kids and coaches, we would see an uptick in success, on and off the mat.” Coach Powell has helped to bring resources back to the inner city high schools, and has a BTS organization that is growing larger each year.

BTS growth can be attributed to several factors. Powell says, “Resources. Money and great people. We have built a dynamite board, have hired an amazing staff, and have raised a lot of money. The wrestling community has embraced us, and for this we are incredibly grateful. The community knows there is an Ellis Coleman on nearly every city block and they want to help us find those kids and provide them a vehicle.” The growth of BTS Chicago, forced the organization to start thinking bigger. Powell states, “The old timers used to talk of The Mayor Daley Wrestling Club at Navy Pier, a place where anyone and everyone was welcome. A high school  sophomore could show up and be coached by an olympic champion, wrestle with NCAA champs, etc. It was a hotbed of wrestling. City kids grew to be amazing wrestlers and great men at Navy Pier. We want to provide similar opportunities for our kids.” That’s the idea behind the entire BTS program, giving inner city kids access that has not been seen in years.

This new facility will allow Beat the Streets to serve its approximate 2,000 members even better, providing countless opportunities for the young student/athletes. Powell discusses the goals of the new facility. “Ultimately, we hope that all of our athletes will grow to become Life Champions. If you are going to help a young woman or man move the needle for themselves, the contact hours have to be ridiculously long and the work has to be incredibly arduous. The facility allows us to build a culture where kids want to buy into something bigger than themselves. When this happens, trust and love can be built. When an athlete trusts and loves her or his coach, the coach can push them past anything they previously believed possible. This is when the needle is moved.” Spending just a few moments with Coach Powell and it is clear that he is motivated to help the inner-city youth. 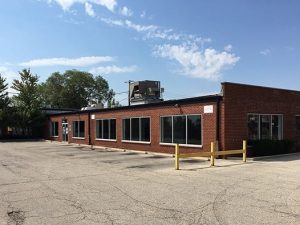 With the new facility set to open mid-April. BTS will be launching a “fund a need” campaign beginning March 1st. This will be the final phase of opening the new facility. People will be able to donate classroom supplies, office supplies, wrestling room supplies, and weight room supplies. Powell and the BTS Chicago organization are extremely excited and eager to help as many young men and women as possible. Powell laments, “We want to be in every neighborhood in Chicago, but we only invest resources when we have the right people running the club. Where we start programs is based first and foremost on who we are investing with. A great club can grow from anywhere if it has the right leadership.” With Mike Powell at the helm, Beat The Streets Chicago has the right leadership, and we can’t wait to see what the future holds.

If you would like to donate, mentor, coach, tutor, or volunteer for Beat the Streets Chicago. Please visit their website www.BTSChicago.org for more information. 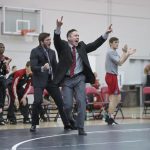 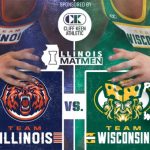