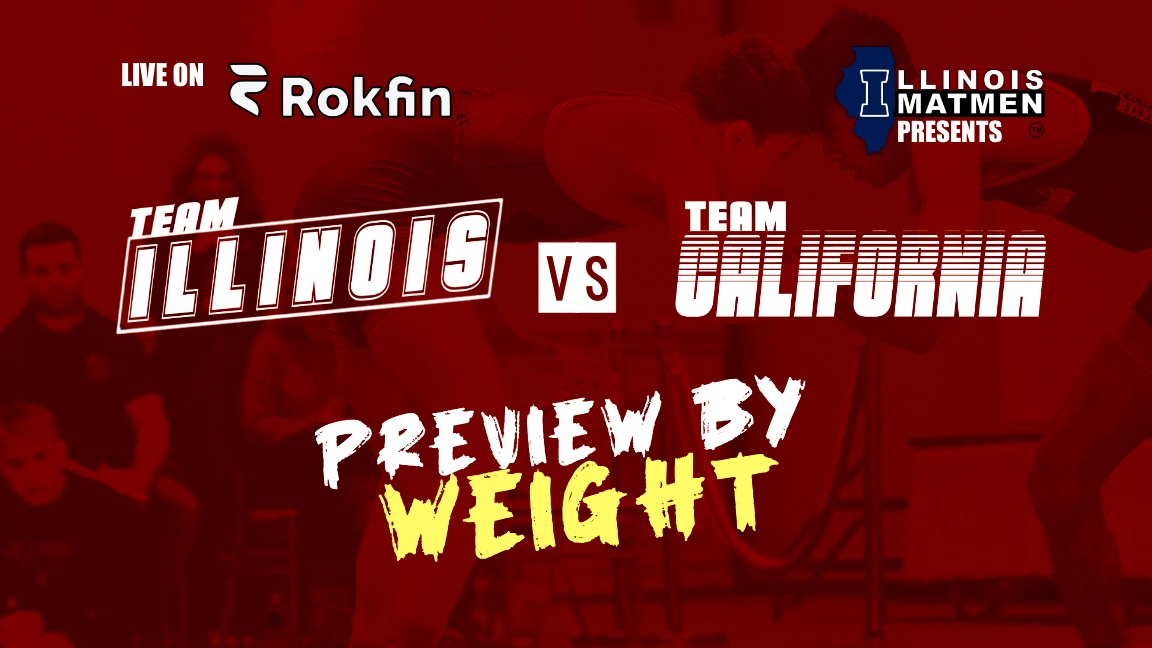 Illinois Matmen is excited to bring you the inaugural, Team Illinois vs. Team California. This event will be streamed live February 19, 2021 to the Illinois Matmen Channel On Rokfin. Tune in, and support your wrestlers.

Two, young, solid, 106 pound wrestlers. Mantanona is coming off an impressive showing at Preseason Nationals, taking first place. Edwards will be looking to upset the young gun, and move into the national rankings. Mantanona will be attempting to solidify his spot as one of the best 106 pound wrestlers in the country.

Gonzalez, a Senior, and three-time state place winner is looking to notch another win over a highly ranked opponent in Barbosa. Barbosa is a highly touted youth State Champion, and will be looking to put his name on the map with a win over Gonzalez.

Farmer is a returning State place winner, coming off a big victory over Joe Fernau at “Test of the Best.” He will have his hands full with offensive juggernaut, Joey Cruz. Cruz is currently ranked #2 in the country, and is looking to solidify his status as one of the best 120 pound wrestlers in the nation.

One of the marquee matchups of the evening. State Champion Koderhandt, ranked #17th in the country, will matchup with sophomore Mantanona. Mantanona is currently ranked #17th in the country at 106 pounds, and has grown a lot since last season. Will Mantanona’s skill translate at a higher weight class? How will Koderhandt’s heavy hands and defense, deal with the speed of Mantanona? Tune in Friday February 19th to see this classic stylistic clash.

Solis ended last season with a loss, falling one match short of placing at the California state championships. Vasquez ended the season with a disappointing fourth place finish. Solis wrestles an attacking style firing leg attacks off constantly, while Vasquez is more of a counter-attack wrestler. This should make for a high paced match, that we can’t wait to see.

Curran the third place finisher a year ago is looking for a quality win over Zinkin, after losing to Jeremey Jakowitsch at “Test of the Best.” Zinkin likes to sit back and pick his spots to set-up his low-level offense. While, Curran likes to push the pace and fire off his attacks. Will Zinkin lure Curran in, or can Curran gas out the California stand out?

Curran was dominant in his matchup against Milos at “Test of the Best” registering the fall. Parker is a two time California State Qualifier and will be looking to knock off the highly ranked T. Curran. Curran will be looking to attack early and often in this match. Will Parker be able to neutralize Curran’s offensive skills, or will Curran continue to run over the competition.

Stauffenburg picked up a solid victory over Schvartsman at “Test of the Best” and will have another tough matchup in Silva. Silva is coming off a third place finish at Preseason Nationals and is looking to get his name on the map with a big win over Stauffenberg on Friday.

In a matchup of two nationally ranked wrestlers. Caliendo, ranked #13th, placed 2nd at Preseason Nationals, and won the TOA Holiday Classic with a fall over Stauffenberg. Caliendo will be looking to right the ship after a tough loss to DJ Hamiti at “Test of the Best.” McDonnell is ranked #19th nationally, is a Tulsa Champion, and is trying to climb the national rankings with a victory over Caliendo.

Gillum draws a tough matchup in Ceasar Garza, currently ranked #22nd in the country. Garza placed seventh at state a year ago, and is looking to move up in the rankings after a win over Gillum. Gillum coming off a tough 3-1 loss to Brayden Thompson at “Test of the Best,” will be looking to stun Garza and move into the national rankings himself.

Cramer rolled through last season with a record of 39-1, the State Champion is currently ranked #9 in the country. Cramer has an array of offensive and defensive skills that will be on display against Monteiro. Monteiro, a defensive wrestler, will have his hands full attempting to slow down Cramer’s offense. Will Monteiro be able wear Cramer down, or will Cramer roll to another victory?

Parker, currently ranked #19th in the nation, is coming off a big win over Dylan Connell  at “Test of the Best.” He will be trying to continue his dominance over the 195 weight class with a win over Kling. Kling is coming off of a Preseason Nationals Championship, and is looking to come up with a big win over the slick wrestling Parker.

Wenzel is a 2019 Class A State Champion and is coming off a huge win over Brandon Hoselton at “Test of the Best.” Mora is currently ranked #10 in the country and an agile big guy. He will be looking to exert his power with heavy snaps, and dig his under-hook to generate both single-leg and double-leg attacks. Can Wenzel slow down the offensive Mora, and fire off his own re-attacks? Friday night we will find out.

Boersma is coming off a solid victory over Apollo Gothard at “Test of the Best.” Boersma is strong and will be on the offensive from the starting whistle. Takafua an athletic heavyweight will need to be ready for the heavy handed Boersma. Be sure to watch these two titans collide on Friday night.

Palumbo is currently ranked #2 in the country at 112 pounds. Palumbo was impressive tech falling Shea Reisel at “Test of the Best.” Duduch is no slouch, ranked #11th in the country at 106 pounds. Duduch will look to get her offense off early and pull the upset over Palumbo. Will Palumbo’s winning ways continue or can Duduch stop her. Be sure to watch Friday February 19th, and see.

Janiak is currently ranked #6th in the country at 127 pounds. Already a high school girls State Champion. Janiak looks to put the pressure on her opponents with a fierce double-leg attack. Netavia Wickson is coming off of a solid win over Ariana Hernandez at “Test of the Best.” Wickson is moving up in weight to challenge the well known Senior Janiak. Does Wickson have what it takes to surprise the Senior? Tune in live February 19th to the Illinois Matmen Channel on Rokfin to find out. 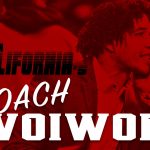 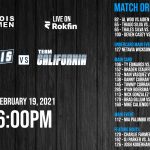